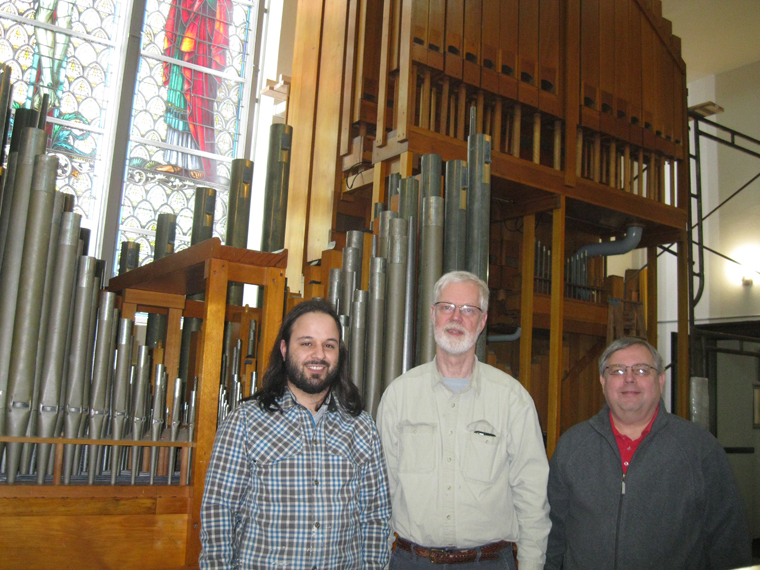 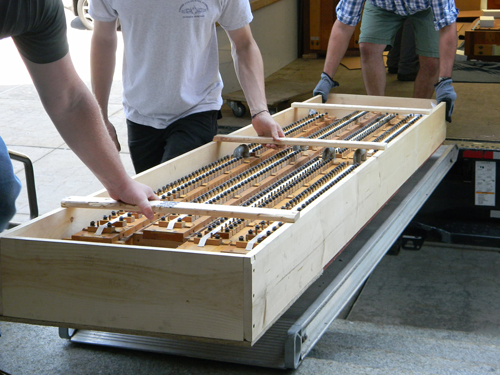 Pipe organ components are unloaded at the Basilica of the Sacred Heart of Jesus in Syracuse. Originally built in 1927, the restored E.M. Skinner Opus 669 organ has three manuals, 40 stops, 36 ranks, and 2,431 pipes. (Photo courtesy Benjamin Merchant)

A transplanted 1927 pipe organ, featuring the “dog whistle” and the “big boy” and the many tuneful components in between, will soon transform the diocesan music scene.

When completely installed at the Basilica of the Sacred Heart of Jesus in Syracuse, the restored E.M. Skinner Opus 669 organ will shine with 2,431 pipes. Among them: the skinny seven-inch metal pipe that makes the tiny whistling sound that a golden retriever would love, and the 25-foot-long, 400-pound wooden “big boy”: low C. The basilica’s former M.P. Moller Opus 1093 organ, which was removed, was built in 1910 and had 1,700 pipes.

The Skinner should be fully functional by Palm Sunday. The inaugural concert is set for 8 p.m. June 7 at the basilica. The organ blessing and dedication is set for 3 p.m. Sunday, June 9. Both events are free and open to the public.

What will the massive Skinner sound like to the people in the pews once the remaining 800 pipes are added and all the wind lines are hooked up?

Merchant answered: “It’s going to be mind-blowing, says the child from the ’60s.”

“The parishioners will have never heard something like this unless they’ve experienced the Skinner organ,” said basilica Music Director Frank Schultz. “I mean, it’s just so unique in sound.”

The dedicatory concert June 7 is sponsored by the Syracuse Chapter of the American Guild of Organists. Performing will be Dr. Todd Wilson, who has played for many orchestras. He is the last organist to have played Skinner Opus 669 in recital: about 20 years ago when the Syracuse-area organists held a “pipe organ encounter” at the First Church of Christ, Scientist, which was then on East Genesee Street in Syracuse.

The developer who owns that East Genesee Street building agreed to donate the Skinner to the basilica. Buying a new pipe organ would have cost the basilica about $1 million. The total budget for transplanting and renovating the Skinner is about $470,000. Schultz said the basilica has raised about a third of the cost. If the parish can raise another third, he said, the Joseph G. Bradley Charitable Foundation will supply the final third as a matching grant. 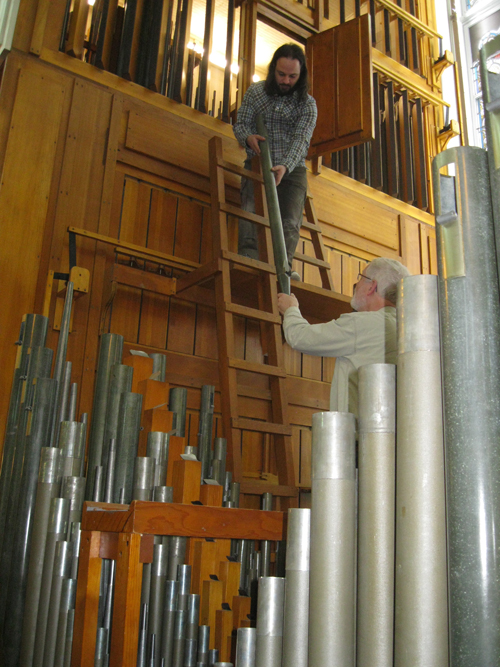 Handling one of the pipes for the E.M. Skinner Opus 669 are, top, Stefan Merchant, and his father, Benjamin Merchant. In its former location, the organ was crammed in. But at the basilica, its parts have been rearranged; in some cases, the workers have made new framing. “I dream about pipe organs a lot,” Benjamin says. (Sun photo | Tom Maguire)

Fundraising events for the project have included the basilica’s annual festival and an annual raffle. “We’re gonna make it somehow,” Schultz said.

He maintains a website for the Skinner project — http://www.opus669.com/, which includes organ specs, photos, and a link to donate. In the website’s “About” section, Schultz says that a total of 588 pipes were playable just in time for Christmas 2018. “It was wonderful to hear a sampling of the organ,” he writes. He also maintains a Facebook page: E.M. Skinner Opus 669 Project.

In order to receive the matching grant from the Bradley Foundation, Kerner & Merchant had to restore the Skinner classically. Microprocessors are much simpler to install in the console, but that was out for this project. Merchant’s company used “very fine leather” (from a supplier in Erie, Pa.) for electro-pneumatic components, shellac, and even animal-hide glue. When a part on the console is turned on, the little leather strips in the back vibrate as if a nervous insect is trapped inside.

Asked how he got into the field of organ restoration, Merchant said: “I grew up in a church that had a pipe organ and I was always interested. So I had an organist friend and he introduced me to an organ builder and I started working for him.”

Removal of the Skinner from the East Genesee Street site was completed in February 2018; the epic process of transferring it to the basilica began last summer. Low C, the heavy wooden pipe that Schultz called the “big boy,” had to be hoisted over the balcony.

The rest of the Skinner includes the console (“dense with pneumatic components,” Merchant said); wind chests, full of valves that open and close; swell box (a separate room that uses louvers to regulate the softness and loudness of sound); and walkways.

About 80 percent of the pipes are metal — an alloy of tin and lead. Asked about any animals lurking in the old metal pipes before cleaning, Merchant said there were “some bugs but nothing major.”

“It has a lot of really soft, beautiful stops. And then it’s got good midrange stops, and then it has some really powerful trumpets.”

The five-horsepower blower motor and fan unit, restored, cleaned, and balanced by Auburn Armature, sits separately high up in the basilica’s west tower. Because the air in the tower is cool, the motor actually draws air from the warmer choir loft. 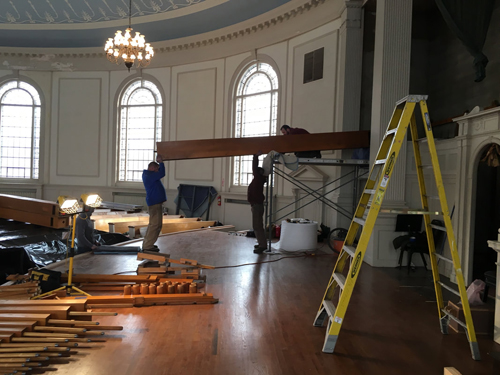 Workers remove low C, the largest and heaviest pipe in E.M. Skinner Opus 669, from its home at a former church building on East Genesee Street in Syracuse. Low C, made out of wood, is 25 feet long and approximately 400 pounds. (Photo courtesy Benjamin Merchant)

Organ technician Stefan Merchant, Benjamin’s son, said, “This is my first experience with a whole transplant-type job of this scale at least.”

He called it “intimidating — when you see everything in boxes and everything’s piled up in storage. … You say, How am I supposed to put all these together? But, luckily, I don’t have to do it alone. … Every day I feel a little sense of achievement. … It’s a neat element of teamwork.”

The basilica’s Opus 669, Schultz said, is “one of the very few unaltered Skinner organs left.”

“The Skinners,” Benjamin said, “are known for their power and also for their warmth. So it has a broad range of sound. So it has a lot of really soft, beautiful stops. And then it’s got good midrange stops, and then it has some really powerful trumpets.”

Schultz will be able to play most of the organ literature on the versatile Opus 669, Benjamin said: “The literature that it plays best will be late 19th, early 20th century music, which is when Skinner was alive.” 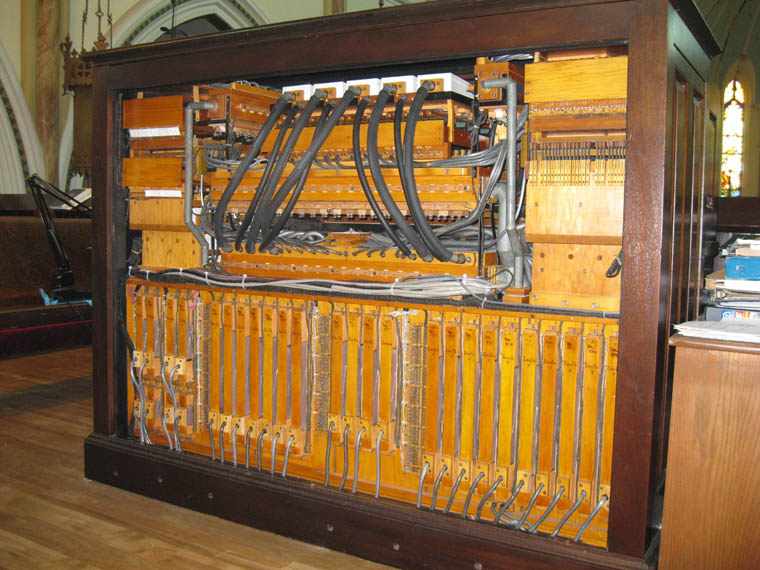 The back of the organ’s console has been rejuvenated with new wiring. “All the electrical contacts had to be replaced,” says Benjamin Merchant, president of the company handling the restoration. The console took about six months to restore. (Sun photo | Tom Maguire)

For instance, a transcription of Elgar’s “Enigma Variations” will be “stunning on this organ,” he said, and it will also play Bach very well.

The Bradley Foundation wants to make sure that Opus 669 is regularly used for special events, Schultz said. In October, he hopes to have a number of local organists come in and play their favorite pieces on a Sunday afternoon. “The Skinner will be very well utilized and publicized,” he promised.

People looking up at the organ from the pews will see the façade, and they will be able to see through part of the collection of pipes. The basilica’s I.J. Paderewski Choir will actually step inside the organ case before walking through a door to the area next to the console.

Opus 669 will require some typically glorious singing from the choir.

Also read: Instrument will ring in a renaissance for diocesan music