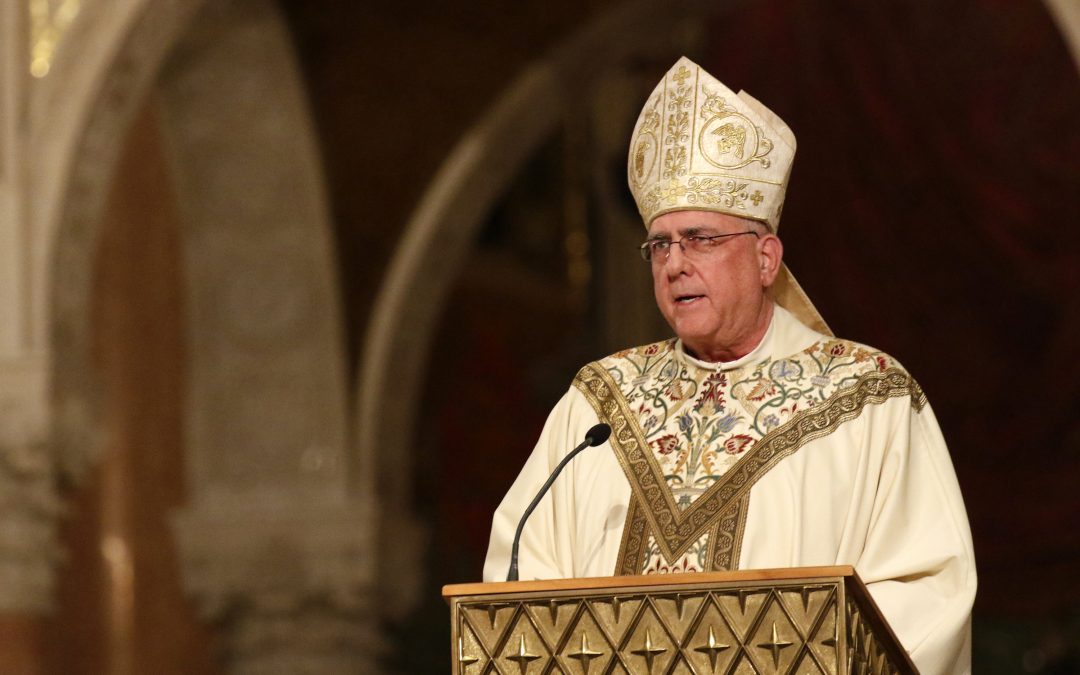 Archbishop Joseph F. Naumann of Kansas City, Kan., chairman of the U.S. bishops’ Committee on Pro-Life Activities, delivers his homily during the opening Mass of the National Prayer Vigil for Life Jan. 17 at the Basilica of the National Shrine of the Immaculate Conception in Washington. (CNS photo | Gregory A. Shemitz)

WASHINGTON (CNS) — It is “unconscionable” that the U.S. Senate failed to “unanimously declare to the nation that infanticide is objectively wrong,” said the chairman of the U.S. bishops’ Committee on Pro-Life Activities.

“No newborn should be left to suffer or die without medical care. It is barbaric and merciless to leave these vulnerable infants without any care or rights,” Archbishop Joseph F. Naumann of Kansas City, Kansas, said in a Feb. 5 statement.

The previous evening, Sen. Ben Sasse, R-Nebraska, called for unanimous consent on his Born-Alive Abortion Survivors Protection Act. Sen. Patty Murray, D-Washington, blocked unanimous consent by objecting to the bill. According to her, current federal law protects a child that survives an abortion.

“Congress must take up and pass this (Sasse) bill and ensure that the legacy of Roe v. Wade does not extend itself from killing unborn children to killing newborn babies,” Archbishop Naumann said.

He also sent a letter to the U.S. Senate urging the body to bring the Born-Alive Abortion Survivors Protection Act to the floor for a vote and pass it before the end of the week. He called it “common-sense legislation.”

Under Sasse’s bill, doctors could face up to five years in prison for not assisting infants born alive after an abortion. It also would require that an infant born alive in an abortion clinic be transferred to a hospital.

“This place fancies itself the world’s greatest deliberative body, but we would be deceiving ourselves if we ignored the biggest debate that’s been happening in America over the last 36 hours,” Sasse said on the floor of the Senate about his Born-Alive Abortion Survivors Protection Act.

Sasse said the governor has been “defending a practice that is morally repugnant … that is repugnant to civilized people across the entire world.”

Northam, a Democrat, had been asked about a bill sponsored by state Democratic Del. Kathy Tran to expand Virginia’s current abortion law. Specifically, Northam was responding to Tran’s remarks about her bill in a hearing. She said it would allow abortion even at delivery if a woman requested it.

The abortion measure in Virginia followed the signing into law an expansion of abortion in New York state. A number of other states are considering similar bills.

Tran’s bill, which has been tabled for now, would have expanded the state’s abortion law by loosening restrictions on third-trimester abortions that are currently allowed in order to take into account the risk of the pregnancy to the mother’s “physical or mental safety.” Tran wanted to remove existing language that says third-trimester abortions are allowed only if the risk to the mother’s life is “substantial and irremediable.”

He added: “Everyone in the Senate ought to be able to say unequivocally that killing that little baby is wrong. This doesn’t take any political courage.”

In addition to calling for unanimous consent on his bill, Sasse planned to invoke Senate “Rule 14,” which allows the Senate to skip the committee process and instead “fast-tracks” the bill by moving it on the Senate calendar so it can be brought to a vote.

During his State of the Union address the evening of Feb. 5, President Donald Trump urged Congress to pass legislation that bans late-term abortion.

“To defend the dignity of every person, I am asking Congress to pass legislation to prohibit the late-term abortion of children who can feel pain in the mother’s womb,” Trump said. “Let us work together to build a culture that cherishes innocent life.”