Building walls to keep immigrants out is not Christian, pope says 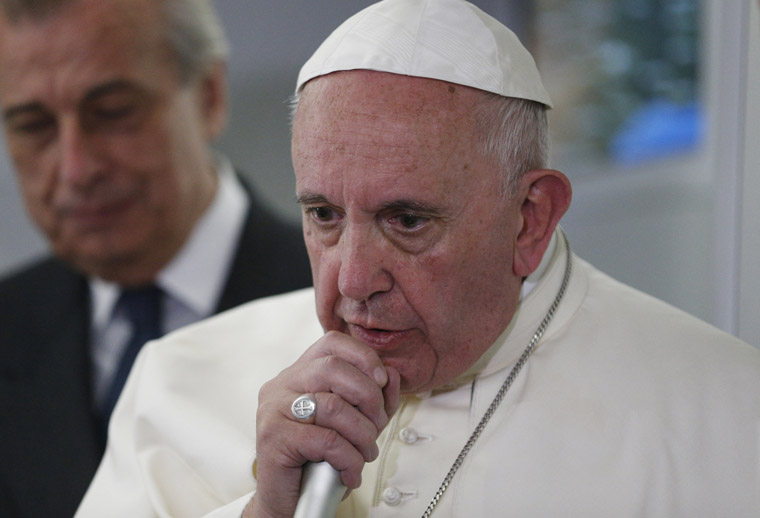 ABOARD THE PAPAL FLIGHT FROM MEXICO (CNS) — As the plane carrying him back to Rome from Mexico was flying over Texas, Pope Francis insisted building walls to keep immigrants out of one’s country is un-Christian.

Holding his customary in-flight news conference Feb. 17 after a six-day trip that ended at the Mexico-U.S. border, Pope Francis was asked about his reaction to U.S. presidential candidate Donald Trump’s proposal that the United States extend the fence along the full length of the border and his comments to Fox Business Network that Pope Francis is a politician and is being used by Mexicans.

But one thing Pope Francis said he did know was that “a person who thinks only of building walls, wherever they may be, and not building bridges, isn’t Christian.”

Asked if a Catholic could vote for such a candidate in good conscience, the pope told reporters: “I’m not going to get mixed up in that. I’ll just say, this man is not Christian if he says this” about building walls.

Pope Francis spent an hour answering questions, including about contraception and the Zika virus, the recently publicized letters between St. John Paul II and a woman philosopher, the sex abuse scandal and the reaction of Ukrainian Catholics to the joint declaration he signed with Russian Orthodox Patriarch Kirill of Moscow Feb. 12 in Cuba.

Jesuit Father Federico Lombardi, Vatican spokesman, told Vatican Radio Feb. 19 that Pope Francis’ statement on the importance of building bridges instead of walls “in no way was meant as a personal attack or an indication of how to vote.”

“The pope said what we know well from following his teaching and his positions: that one must not build walls, but bridges,” the spokesman said. “He always has said this, including many times in reference to questions of migration in Europe.”

Father Lombardi also pointed out that the pope, in answering the question, said, “if he says this,” which was “giving the benefit of the doubt” to Trump in case he did not say what the reporter attributed to him.

During the in-flight news conference, a reporter asked why he had spent so much of the week denouncing the ills that plague Mexico, but said nothing of the scandal of clerical sexual abuse and, in particular, about the late Father Marcial Maciel Degollado, the Mexican founder of the Legionaries of Christ. The priest lived a double life, fathering children and sexually abusing numerous seminarians.

Pope Francis’ comment on Father Maciel’s case was to praise retired Pope Benedict XVI who, as a cardinal and prefect of the Congregation for the Doctrine of the Faith, tenaciously investigated the allegations and insisted “there was a need to clean the church’s dirt, the garbage.”

The Catholic Church has done much in the past dozen years to protect children, he said, but the work is ongoing. In fact, he said, when he met with his international Council of Cardinals before leaving on the Cuba-Mexico trip, it was decided that the doctrinal congregation should have a new adjunct secretary to oversee the Vatican investigations of abuse allegations against priests.

Asked what should be done with a bishop who simply transfers an accused priest from one parish to another, Pope Francis said such a bishop is “a man without a conscience, and the best thing he can do is present his resignation. Is that clear?”

The sexual abuse of a child by a priest is “a monstrosity,” he said.

While Pope Francis was in Mexico, the BBC ran a story on previously unpublished letters from St. John Paul II to Anna-Teresa Tymieniecka, a philosopher. Many news reports on the letters raised doubts about the relationship being strictly a platonic friendship.

Pope Francis said the friendship was not a secret; “I already knew about this friendship between St. John Paul II and this philosopher when I was in Buenos Aires.”

“A man who does not know how to have a relationship of friendship with a woman — I’m not talking about misogynists; those are sick — well, he’s a man who is missing something,” the pope said.

In his own experience, he said, it is important to get a woman’s opinion when making decisions because “they look at things in a different way.”

“But the pope is a man. The pope needs the input of women, too. And the pope, too, has a heart that can have a healthy, holy friendship with a woman. There are saint-friends — Francis and Clare, Teresa and John of the Cross — don’t be frightened,” he told reporters.

Pope Francis recognized that priests’ friendships with women are still suspect, which is a shame, he said. “We have not understood the good that a woman can do for the life of a priest and of the church in the sense of counsel, help, healthy friendship.”

The pope also was asked about an interview Archbishop Sviatoslav Shevchuk of Kiev-Halych, major archbishop of the Ukrainian Catholic Church, gave Feb. 13 in which he said Ukrainians felt “deep disappointment” over the joint declaration.

“When I read this, I was worried,” said the pope, who explained that he has known and respected Archbishop Shevchuk for years.

The archbishop’s criticism seemed “a bit strange,” he said, but when people speak, their words must be read in the context of what they are living. The Ukrainians have the experience of Russian aggression toward the Ukrainian Catholic Church and Russian support for separatist fighting in Eastern Ukraine. That experience cannot be ignored, he said.

“You can understand how people in that situation feel this way,” the pope said. The archbishop’s right to express his opinion must be respected, he said, “especially in this situation.”