Cardinal Dolan: If sanctuary of the womb is violated, no one is safe 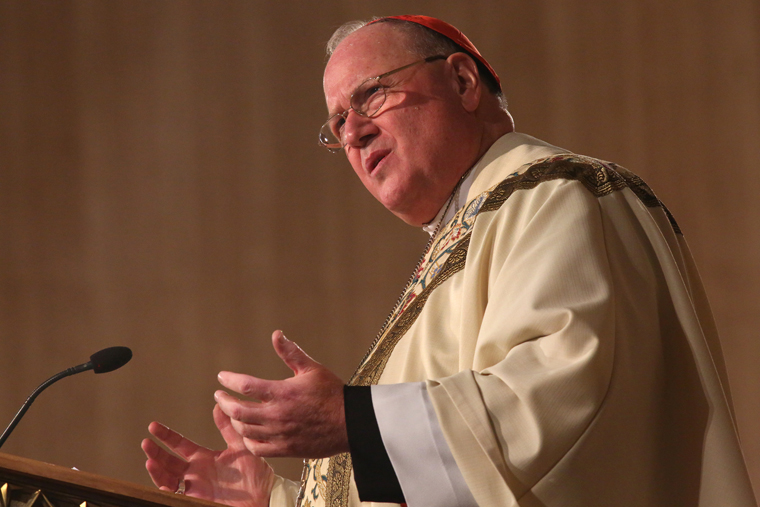 WASHINGTON (CNS) — Cardinal Timothy M. Dolan of New York warned that if the sanctuary of the womb is violated, then other sanctuaries are at risk.

“Can any of us be safe, can any of us claim a sanctuary anywhere when the first and most significant sanctuary of them all, the mother’s womb protecting a tiny life, can be raided and ravaged?” he asked in his homily during the Jan. 26 opening Mass for the National Prayer Vigil for Life at the Basilica of the National Shrine of the Immaculate Conception. The vigil always precedes the annual March for Life, which takes place on the National Mall.

Cardinal Dolan, chairman of the U.S. Conference of Catholic Bishops’ Committee on Pro-Life Activities, called the womb “a sanctuary which beckons us, where we are safe and secure in our mother’s tender yet strong embrace, where the Creator himself assures us of protection and life itself, a sanctuary God has designed for us to protect our lives now and in eternity.”

He summoned up a montage of sanctuaries throughout human history, including those used by the Israelites, the sanctuary of the temple in Jerusalem where Mary and Joseph took Jesus each year, the use of cathedrals and churches as sanctuaries from violence, and the United States — first as a sanctuary for the Pilgrims fleeing religious violence in England, later for Catholics with little to their name but “clinging within to that ‘pearl of great price,’ their faith,” and today’s immigrants and refugees.

When life in the womb is threatened, “should it shock us” that “such a society would begin to treat the sanctuary of the earth’s environment as a toxic waste dump; would begin to consider homes and neighborhoods as dangerous instead of as sanctuaries where families are protected and fostered; would commence to approach the poor as bothersome instead of brothers,” Cardinal Dolan lamented.

Shrine officials estimated that 12,000 attended the Jan. 26 Mass, which was shown on three cable channels and broadcast on two radio networks. Among the faithful were 545 seminarians, 90 deacons, 320 priests, 40 bishops and five cardinals in a 20-minute entrance procession.

The faithful were squeezed more tightly than usual as pews in the left transept were blocked off so work crews could continue work on the shrine’s Trinity Dome, which should be completed by next year’s March for Life. The blockage resulted in the loss of “several hundred” seats, according to shrine spokeswoman Jacqueline Hayes.

Auxiliary Bishop Barry R. Knestout of Washington received hearty applause when he announced near the end of the Mass that the starting times for three pre-March for Life Masses elsewhere in Washington the next morning would be moved up an hour to allow for longer lines in security checkpoints at the pre-march rally, as among those speaking at it now included “senior White House officials and a special guest.” No name was mentioned, but earlier in the day it was announced Vice President Mike Pence would address the March for Life rally in person. After a lineup of speakers, rally participants then march from the National Mall to Constitution Avenue, then up the avenue to the Supreme Court.

The weather changed overnight from the low 50s at the start of the Jan. 26 Mass to a more typical near-freezing temperature with stiff winds before a Jan. 27 morning Mass at the shrine celebrated by Archbishop Gregory M. Aymond of New Orleans, USCCB secretary.

Archbishop Aymond’s homily sounded a similar theme to Cardinal Dolan’s in terms how acceptance of abortion is “used to justify” other disrespect for life at various stages, citing assisted suicide, euthanasia, the death penalty and the rejection of immigrants. Quoting from that day’s Gospel, Archbishop Aymond said, “Jesus says, ‘Let them come to me, let them come to me.'”

He received applause from a Mass attendance estimated at 3,500 when he cited the results of a recent study that showed “the abortion rate in the United States has hit a historic low since Roe v. Wade.” Archbishop Aymond said the study speculated on various reasons for the decline, but “one was not” mention.

That reason was “the witness of so many people for life,” he said. “Youth and young adults are strongly pro-life in our world and in our church,” he added to applause. “You are making a difference in the United States. You are changing our culture from a culture of death into a culture of life,” the archbishop said to still more applause.

During the March for Life, and afterward in the marchers’ parishes and neighborhoods, Archbishop Aymond said, “we will continue to witness, and with God’s help, we will continue to be strong voices for the respect and the dignity of human life.”