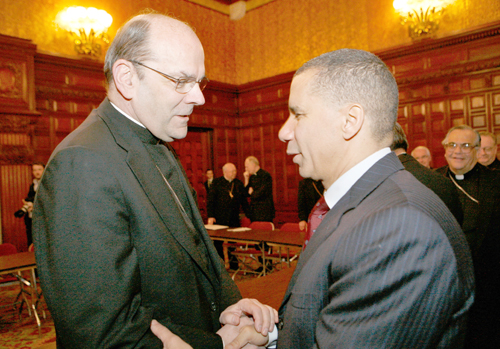 Clergy and laity travel to Albany for Public Policy Day

ALBANY — For parishioners in the Syracuse Diocese, this year’s participation in Public Policy Day on March 9 had some familiar factors: the nerves, the notes, the carefully practiced appeals to politicians.

But it also introduced newer ways of making voices heard.

In his first year organizing the annual trip to meet with legislators in Albany, Father Charles Vavonese, Public Policy Day Coordinator for the Syracuse Diocese, used YouTube clips to help prepare participants throughout the diocese. The popular web site allows anyone to post his or her own videos on the Internet for others to see.

Approximately 150 people registered to attend the event, and parishioners and students from diocesan high schools boarded buses or drove themselves the two and a half hours to Albany to participate in the day. Those who came were divided into small groups who lobbied nine members of the assembly and five senators. Bishop Robert Cunningham also met with Gov. David Paterson.

Because people were coming from around the diocese, Father Vavonese posted the informational session on the Internet so that everyone had an

opportunity to learn more about the day at a time and place that was convenient for them. The videos can be viewed at www.youtube.com/syrdio.

In a session taped before students at Bishop Grimes Jr./Sr. High School, Father Vavonese explains the reasons behind the Catholic Church’s participation in Public Policy Day and the expectations and parameters of the day.

“In our society we need to take care of those who are vulnerable and those who have difficulty being able to speak for themselves,” Father Vavonese said in the video. “It’s an opportunity for us to go beyond our individual resources for helping people and look to the political structure and look at the way that politics and procedures and laws are formed.”

Father Vavonese explained why certain issues receive attention from the diocese while others, like the soda tax, do not. “Our standard, our criterion is we believe every proposal, policy, political practice must be measured by how it touches the human person and if it contributes to the common good,” he explained.

There were six targeted issues that the groups from the Catholic Church focused on either advocating for or against during the day.

The first issue was the opposition of a radical abortion bill before the senate that would make abortion a right and could force Catholic hospitals and health care providers to perform the procedures. The bill could also create a situation where those who advocate for carrying a child to term could be accused of discrimination. Father Vavonese said this would be a violation of the first amendment guarantee of the free practice of religion.

The second issue was the support of care for the elderly and disabled. As legislators struggle to balance the state’s budget, they are looking to make funding cuts wherever possible. Groups from the diocese urged these legislators not to make cuts in funding that would provide support for the frail elderly and those dependent on nursing homes and hospitals. They also advocated for maintaining funding for home health care programs that could keep the elderly or disabled out of nursing homes and with their families whenever possible.

Similarly, the groups expressed concern to legislators that financial cuts not increase the burden on poor families who are already struggling to make ends meet.

The groups urged the legislators to restore funding for the Maternity and Early Childhood Foundation, the only state-funded foundation which provides women with alternatives to abortion and provides them with support throughout the pregnancy. Father Vavonese said Gov. Paterson’s proposed budget cuts funding for this foundation while maintaining $45 million in funding for medicaid abortions and fetal stem cell research.

The lobbyists from the diocese also advocated for the preservation of Catholic Schools, perhaps through some form of tax credit, to help relieve the burden on public schools. In addition, the state ordinarily reimburses Catholic schools for carrying out mandated functions like maintaining attendance records and giving Regents exams, but because of this year’s budget woes, this money has not been fully refunded. Father Vavonese said that the state owes about $500 for each student attending a religious or private school in the state.

The final issue that groups from the diocese supported was funding community re-entry programs that make the return to society more successful for those coming from the prison system. The programs provide counseling, financial management and job skills training that help those who had been incarcerated become contributing members of society.
Each of these issues was brought forward during a meeting with Assemblyman Al Stirpe, a Democrat representing the 121st District, which includes Cicero, LaFayette, Clay, Manlius and Pompey. Although the radical abortion bill is before the senate, and not the assembly, Stirpe supports abortion rights legislation, and this was one of the first issues raised.

“I’ve been a youth minister for 15 years, and I’ve never had an experience where a girl came to me [after having an abortion] and said she did the right thing,” said Bob Walters, diocesan director of Youth and Young Adult Ministry.

Stirpe said no one wants to return to the days when women have no choice but to turn to unsafe backroom abortions. “Having programs that help poor young girls who happen to  be pregnant come and bring their pregnancy to term is the best way I think that you or anyone else can help prevent abortions,” he said.

But Stirpe also had some challenging words for the group. “A lot of times Catholic groups have tried to get legislators to do what they have failed to do themselves. The figures show that Catholic women get as many abortions as women of any other religion,” he said. “The fact is they’ll never stop doing it totally.”

As for reimbursing Catholic schools with the funds they are due, Stirpe said it wasn‘t simply an issue for Catholic schools, but for all private schools. He said the cost of education is out of control in public schools, especially in places like Long Island where schools have performing arts centers rather than auditoriums and offer dozens of pricey advanced placement programs.
Madeline Leahy, a senior at Bishop Grimes Jr./Sr. High School, spoke with Stirpe about the radical abortion bill. Afterward, she seemed relieved and said she thought it went pretty well. “I was nervous, but I wanted to do it because it’s important to be a part of what’s going on in your own community and not just sit back and let things happen,” she said.

Another group had prepared to meet with Sen. David Valesky, a Democrat representing the 49th District which includes Madison and parts of Oneida, Onondaga and Cayuga Counties. Due to a scheduling conflict, the group met instead with Valesky’s aide Ariana Caplan.

Father Jim Lang, Vicar for Parishes, began the meeting by acknowledging the significant financial issues facing the state. But, he said, there are moral issues that should not be influenced by fiscal concerns. “The question for us from a moral perspective is coming down to, ‘What’s the moral thing to do?’ And when people are at stake, then that’s a moral issue,” Father Lang said.

The role of abortion in the reproductive health care act was one of the key concerns, he said.
“The phrasing of the conscience clause in a truly unambiguous way is a very crucial issue for us,” Father Lang said.

Suzanne Davidson, a member of the Women’s Commission on Church and Society, asked that Valesky consider voting based on his faith. “We would ask the senator to reconsider his past beliefs and voting record, especially as … he is a Catholic and a practicing Catholic,” she said.

Paul Welch, director of special projects for Catholic Charities, advocated for re-entry programs and funding to help refugee communities. “We have refugees who can be tremendous assets if you give them a little bit,” he said.
For Daniel Adamitis, a senior at Bishop Grimes, the day was an opportunity to speak up for those who haven’t had the same chances in life that he has had.

Adamitis told Caplan about a friend of his who grew up in a family that struggled just to get by, and said his friend might have benefitted from going to a Catholic school as he has.

“There are people that are really just trying to advance but they aren’t given the same chances,” Adamitis said. “Just don’t turn away and totally forget about them because they could be the next senator, they could be the person turning around to help the next guy.”