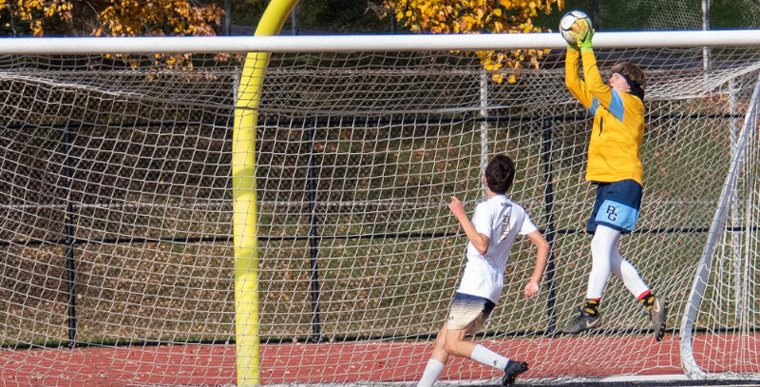 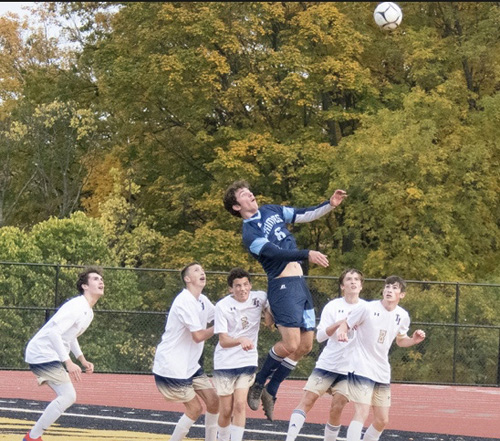 Bishop Grimes striker Jack Gutchess leaps high over the opposition to head the ball against Thousand Islands. Gutchess says: “As the season went on we kind of learned our roles
better and figured out where we need to be on the field.” (Photo courtesy Rhonda Hawes)

These Cobras did not crawl into a hole and quit. With a nucleus of true soccer nuts, they re-formed and found their grip.

The Bishop Grimes boys soccer team started this season 2-3. But going into Tuesday’s Class C sectional final against the combined Westmoreland/Oriskany team, the Cobras had won 14 games in a row. Even their goalie, who booted his way to an assist this season, thinks “offense.”

“We’ve never been shut out yet this year,” said goalie Matt Tarby. “So I just figure, if I give up a goal I know they’re gonna come back and score one just for us.”

He has made 127 saves this year. In the sectional semifinal Oct. 30 against Bishop Ludden, he was perfect, with six saves in a 3-0 victory that ended the coaching career of Ludden legend Oscar Vergara.

“I’ve known him for a long time,” Grimes Coach Timm O’Connor said of Coach Vergara. “He’s a good guy, he knows his stuff, he’s passionate about the game. … He wished us good luck. We had a brief conversation before the game while we were sitting and waiting. We had a conversation about how he set an example for the rest of us.”

“My hat is off to Grimes,” said Coach Vergara, who exits with just over 500 victories after 43 years of coaching, including about 37 at Ludden. He added: “We lost to a good team.”

Bishop Grimes midfielder/forward Deng Mawien (10), shown in a game earlier this season, scored a goal and made one assist in the Cobras’ Class C sectional semifinal victory over Bishop Ludden on Oct. 30. “Deng’s one of the most skilled players that we’ve ever had here,” says Grimes Coach Timm O’Connor. (Photo courtesy Hal Henty)

The Grimes-Ludden game, held at night on a neutral field (Vernon-Verona-Sherrill), seemed like the soccer version of “Holy War”; Grimes’ three losses this season were all to good teams, and one of them was Ludden.

So Coach O’Connor ditched the setup of four defenders in the backfield. “We only played three in the back with more help on top and it turned our whole season around,” he said.

In the semifinal, Grimes striker Jack Gutchess had the feeling that the entire Bishop Ludden school showed up, and he heard some ribbing about his mustache.

“They were ready to play, I’ll tell you that,” Grimes midfielder/forward Byam Mugushu said of Ludden. Mugushu, a senior, is No. 1 in Section III with 86 points (36 goals, 14 assists). 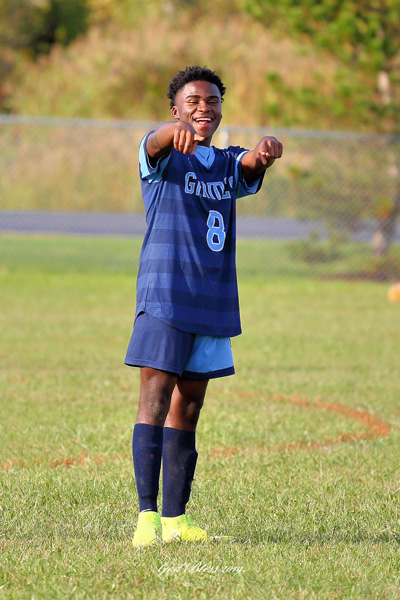 BIshop Grimes midfielder/forward Byam Mugushu has scored 36 goals this year and made 14 assists for 86 points. He is a big reason why the Cobras are the highest scoring team in Section III this year. Mugushu and Deng Mawien “are the true leaders on the field; they dictate what we do,” Cobras Coach Timm O’Connor says. (Photo courtesy Hal Henty)

“One of the things about when Ludden and Grimes play each other,” said Coach O’Connor, “is a lot of these kids have gone to school together, in parochial school; they’ve been playing against each other in whatever sports they’re playing in, for the five or six years that they’ve been here.

“So there’s a lot of familiarity between the fans, the players, the parents, and it gets to be a little contentious. And everybody’s just cheering for their team for the best outcome.”

Ludden already was playing without starting midfielder Liam Casey, who was injured in the Gaelic Knights’ sectional quarterfinal, a 1-0 victory over Waterville.

Then, about seven minutes into the Grimes game, Ludden starter Liam Mahar suffered a head injury and had to leave the game.

“We were banged up a little bit,” Coach Vergara said.

But 10 minutes into the second half, Grimes and Ludden were still tied at 0-0.

Grimes Coach O’Connor said a colleague was a little worried at halftime.

He remembers telling him: “We just got to let ’em play. We’re not losin’.”

Sure enough, Ludden got hit by a “tree.”

Grimes senior Deng Mawien, a midfielder/forward who plays “all over” the field, is quite tall and sports a hair style that he figures evoked a tree to Ludden fans.

“Yes, I like that,” Mawien said. “It made me feel better about myself. You like me? You called my name? You know my name? I feel good. And I showed them. I showed them who’s the tree.”

That satisfying goal by Mawien won the game. Striker Gutchess intercepted a ball and kicked it in the air to Mugushu, who kicked it to Mawien. He came across the top of the penalty area and hesitated a couple of times, looking for an opening, Coach O’Connor said.

On about the third hesitation move, Mawien found an open spot, the coach said, “and he just drilled it off the crossbar — hit the bottom side of the crossbar, came right down, hit the goalie and went in.”

“Deng’s one of the most skilled players we’ve ever had here,” Coach O’Connor said.

In practice, he said, “Deng will take the ball and say, ‘I’m going to hit it off the crossbar, Coach,’ and he does it on a regular basis.”

Mawien played soccer every day growing up in the refugee camp in Kakuma, Kenya; he came to this country when he was 13 or 14.  When he arrived in this area he played soccer “with big people every day” at Henninger High School in Syracuse. Now he is so big that even the opponent’s fans know his name.

“Deng is a very good complement to Byam,” Ludden Coach Vergara said, adding that he “runs all over the place, whacks the ball.”

Grimes’ Mugushu scored the second goal against Ludden. Coach O’Connor said the ball came down the left side and Mugushu headed it past the defender, took it down to the corner, and cut it back to the right. He kicked the ball across the goal into the far-side (right) netting.

“I just ripped it,” Mugushu said.

He came to this country from the Democratic Republic of the Congo eight years ago. He and teammate Mawien are resident soccer players anywhere there is a pickup game on the north side of Syracuse.

Ludden knew that history or sensed it. “Every time Deng or Byam had the ball they would send like three guys over,” Gutchess said.

“He’s a joy to watch,” Ludden Coach Vergara said of Mugushu, whom he sees as a very smart player who finishes well, a skill that cannot be taught: “Born with it, kind of have a nose for the goal — that’s what he does.”

“I grew up in a sport family; my dad was a beast in soccer,” Mugushu said. “He was a defender, a really good defender. … My dad was a coach, my uncle was a coach, and I just love soccer.”

The game even makes him a better person, he said.

Mawien made a beautiful move; he went on a run in the corner and passed it right by the goalie to Gutchess, who tapped it into the wide-open goal.

Gutchess, six feet, four inches tall, is mainly a basketball player. He likes Grimes so much that he travels by car 45 minutes to get there from his home in Cortland. The loss to Ludden early this season was his first varsity soccer game. He was on Grimes’ modified soccer team in the eighth grade but then stopped playing soccer for a few years.

When Gutchess starts running down the field, Gray said, “people get out of the way.”

So does Grimes goalie Tarby, a phenomenal athlete in the eyes of his coach: “You see goalies make those high saves where they climb above everybody else …, that’s Matt, he makes those saves; he makes the hard ones that are on the ground.”

Coach O’Connor said his goalie looks like a second baseman fielding ground balls — his main sport is baseball; a senior, he will pitch for Le Moyne College next year.

In the semifinal, a Ludden player cut through the Cobras’ defense and kicked the ball at Tarby. The ball deflected off him and into the middle, and his defense cleared it away.

“He came up with a couple of big-time saves,” Coach Vergara said, adding that Tarby commands the box well, speaks loudly to his defenders, and coaches the team from the back.

Ten of Grimes’ 23 players are seniors. The squad has seven returnees from last season.

“A lot of guys have had to come in and develop new skills, new roles, play different positions,” Coach O’Connor said, “and the results have been amazing.”

“When you start off 2-3, you got two directions you can go,” Athletic Director Gray said. “One, you’re gonna use that as motivation to continue on and try to change some things and win some matches, or you can go the opposite direction where guys start being selfish and looking out for just their stat line. …

“They turned it around.”

One of Grimes’ losses was 6-1 to Fowler, which is now a Class A finalist.

“We challenged these guys a little bit to play harder in that game and they did,” Coach O’Connor said.