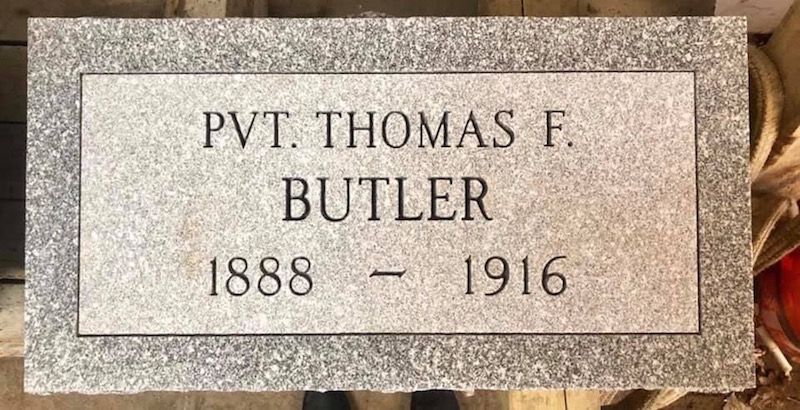 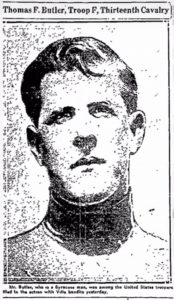 In an effort to remember Thomas F. Butler, Syracuse residents have come together through social media to honor the fallen soldier.

Born in 1888, Butler was a Syracuse resident who lived at 411 Seymour Street and served as a member of the 13th Cavalry Regiment.

On March 9, 1916, Butler was stationed at what is now known as Camp Furlong in Columbus, New Mexico, when Pancho Villa, a Mexican revolutionary, attacked the people of Columbus.

This is the last time the United States was attacked by a foreign power with boots on the ground.

Surprised but prepared, the soldiers and residents acted quickly, engaging in battle until the Villistas, as they were known, retreated. In the end, 18 Americans perished: ten civilians and eight soldiers. One of those soldiers was Thomas F. Butler, aged 28. 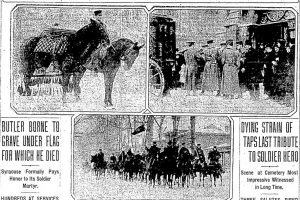 Images from the funeral of Private Thomas F. Butler, from a 1916 edition of the Syracuse Journal. (Photo courtesy David Haas)

Upon his death, Butler’s body was returned to Syracuse. For unknown reasons, his body wasn’t buried until July and he never received a tombstone or marker.

This story was unearthed by David Haas, owner of @SyracuseHistory on Instagram, who encouraged the community to properly remember Butler.

Haas worked with Saint Agnes Cemetery to pinpoint Butler’s burial location and began a GoFundMe page to raise the funds necessary to provide a marker.

Lutz Memorial provided a marker at a discounted rate and the cemetery waived their setting fee.

All necessary funds were raised within two hours of the story being posted on Instagram.

A memorial event has been organized by Hollis Funeral Home to celebrate the installation of the marker and remember Thomas F. Butler at 10 a.m. on June 1 at Saint Agnes Cemetery. The service will include full military honors and will be led by Father Jim Mathews of Saint Lucy’s Parish. Saint Lucy’s is the former parish of Butler. This service is open to the public and community members are encouraged to attend.