Father Brown always ‘enjoyed the wisdom of the people’ 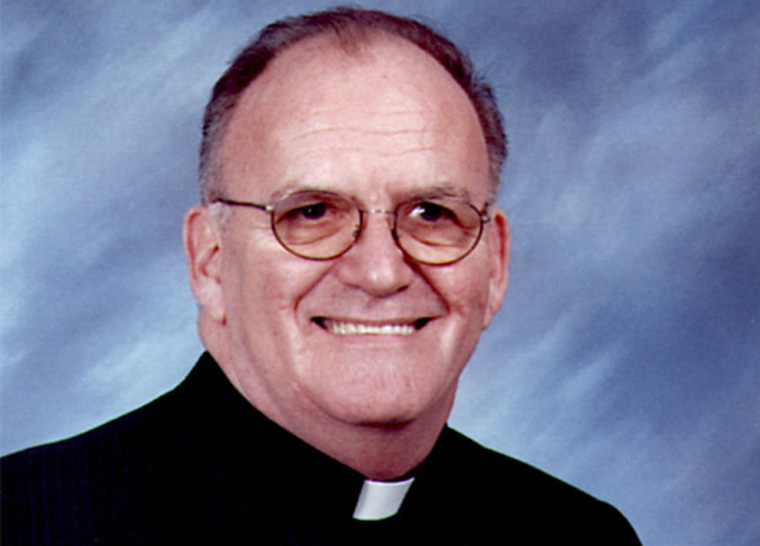 Father Matthew Brown knew the nursing-home setting as a chaplain and ultimately as a patient.

He spent only a couple of months in that setting before he died Aug. 26, 2019, said his friend Father John Kurgan. He said Father Brown felt it was different “on the other side,” as a patient rather than as a chaplain.

Father Kurgan once visited the nursing home and saw Father Brown the patient trying to reassure another patient who wanted to “be someplace else.” It reminded Father Kurgan of Scripture (John 21:18) that someone will take your hands and “will lead you where you do not want to go.”

“Matt was well loved by the nursing-home residents,” Father Kurgan said.    “When he became one he did focus on helping other residents come closer to God, and accept where they were in life.”

Father Brown himself had accepted where he was, Father Kurgan said, getting used to doing as asked by nursing-home staff.

More than a dozen priests and four deacons took part in the Mass of Christian burial for Father Brown on Aug. 29 at Our Lady of Sorrows Church in Vestal, on the south side of the Susquehanna River, where Father Brown served early in his priesthood. He was also in residence at the parish for many years while a nursing-home chaplain and he stayed there following his retirement.

A native of Endwell, across the river, Father Brown was stationed mostly in the Southern Tier. He is perhaps best remembered for his ministry at the 11 nursing homes in Broome County. It was at those facilities that he celebrated    Mass for residents each week.

In 2013, Father Brown celebrated his 50th jubilee. Speaking of his service in nursing homes, he told the Sun: “I loved it. I enjoyed the wisdom of the people. I also liked serving Mass — it was needed.”

He added that he enjoyed the people he served throughout his priesthood: “The parishes that I have served, especially in Vestal, have seemed like home to me.”

Father Kurgan, pastor of Holy Cross parish in DeWitt, knew Father Brown for 18 years. The previous pastor at Our Lady of Sorrows, Father Kurgan was the main celebrant of the funeral Mass.

Father Kurgan said Father Brown had planned his own funeral and had many beloved hymns, way too many for one funeral.

Father Brown, he said, loved to listen to music and he did sing, but he did not play any instrument and recently he had been unable to hear the music well.    But Father Kurgan added that Father Brown said it was all right because it was “in his head”; it traveled with him.

The same was true for other things, Father Kurgan said; Father Brown had a hard time concentrating on his breviary. But it was OK because it was “up here.”

The first reading was from Ecclesiastes 3: “There is an appointed time for everything and a time for every affair under the heavens.”

The second reading was Romans 6:3-4, 8-9, which includes this line: “If, then, we have died with Christ, we believe that we shall also live with him.”

The Gospel was John 14:1-6, which begins with this line: “‘Do not let your hearts be troubled. You have faith in God; have faith also in me.’”

Father Kurgan noted that Father Brown died at the same time on Monday, Aug. 26, that he entered the nursing home, exactly two months prior.

A large choir sang the hymns during the funeral in front of several hundred people who were from many different parishes in the area.

Just before the funeral ended, Our Lady of Sorrows’ pastor, Father John Donovan, invited the gathered to have coffee while they waited for the family to return from the cemetery. He said the food would come later — plenty of baked goods. Father Donovan said, “Matt would say there are too many [baked goods].”

Prior to and after the funeral, people in the gathering space took time to remember Father Brown’s kindness, humor, and personality. Some thought of hearing a joke or two from him in church. Others recalled how his morning Mass at OLS brought many of the same people together each day.

One woman who had helped Father Brown at nursing home Masses remembered how he loved to sing. She said he encouraged her to keep up her music and continue to sing.

“Father Brown was quite soft-spoken,” Father Kurgan said, “and usually joked or was sharing a word of encouragement, although he was very well versed in Sacred Scripture.

“While it is impossible to sum up a person’s life in a few words, I would say that Father Brown had a good sense of God and a good sense of humor. He was quite intellectual at times but no one ever found him boring! He loved God dearly.”

Just before the casket was taken to the hearse, the priests and deacons lined up in the gathering space.  They concluded by singing the Salve Regina.

Then the church doors were opened to a bright blue sunny sky with white puffy clouds above.