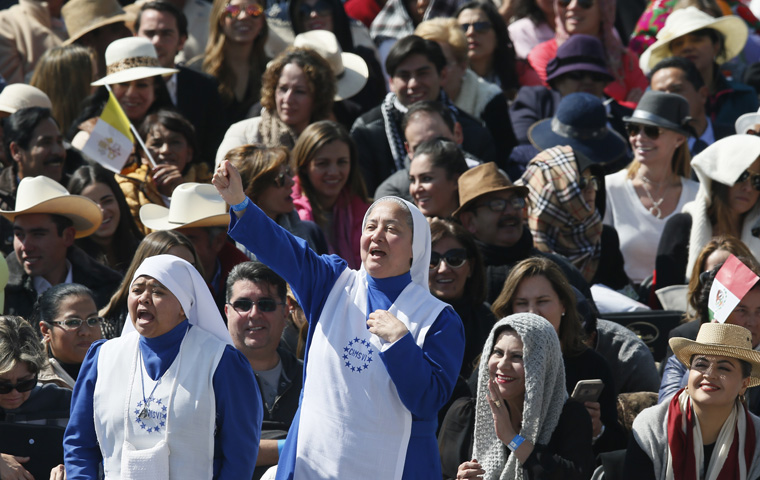 ECATEPEC, Mexico (CNS) — Pope Francis began his travels to Mexico’s “peripheries” by visiting an overcrowded, sprawling settlement known internationally as a hunting ground for girls to force into prostitution and for boys to enlist in the drug trade.

Ecatepec, on the northern edge of Mexico City, also has tidy gated communities and a new shopping mall with department stores like Sears, a big WalMart, Starbucks and dozens of other shops and restaurants.

Pope Francis celebrated Mass Feb. 14 on a vast open field with some 300,000 people. The high altar platform was decorated with Aztec designs — flowers and birds — made of flowers and petals.

More than 1.7 million people live in Ecatepec, which, Vatican Radio described as “a lawless neighborhood where organized crime, pollution and poverty reign and where most people fear to tread.” Like Ciudad Juarez in the north was a decade ago, Ecatepec has now become famous as a place where it is particularly dangerous to be a woman because of murders, kidnappings and human trafficking.

Sister Angelica Garcia Barela, a member of the Servant Missionaries of the Word, was thrilled the pope was visiting. “He comes to show the faith and to change hearts. The pope’s faith, his enthusiasm and joy, isn’t fleeting and it’s contagious. Much can change.”

With other members of her order, Sister Garcia spent the night at the Mass site so she would be in place early to watch over the pre-consecrated hosts she would help distribute during Communion to people far from the papal altar.

Her main ministry is going door-to-door sharing the Bible with families. She knows how to evangelize and said Pope Francis is the perfect example of “evangelization through presence.”

After Mass, Pope Francis recited the Angelus with the thousands gathered on the dusty field. Before leading the prayer, he recognized “how much each one of you has suffered to reach this moment, how much you have ‘walked’ to make this day a day of feasting, a time of thanksgiving.”

He urged the people to step up and work together to “make this blessed land of Mexico a land of opportunities.”

It should be a land where, he said, there is “no need to emigrate in order to dream, no need to be exploited in order to work, no need to make the despair and poverty of many the opportunism of a few, a land that will not have to mourn men and women, young people and children who are destroyed at the hands of the dealers of death.”

In his homily, Pope Francis did not specifically mention the violence against women or the drug traffickers, but instead addressed the ways in which people give into little temptations that too easily grow into great evil.

In the Gospel story of Jesus being tempted by the devil in the desert, the pope said, “Jesus does not respond to the devil with his own words, instead he uses the words of God, the words of Scripture. Because, brothers and sisters, ingrain this in your minds: You cannot dialogue with the devil!

“You cannot dialogue with the devil because he will always win,” he insisted. “Only the power of the word of God can defeat him.”

Lent, the pope said, is a time of conversion, which involves acknowledging each day how the devil tries to tempt and divide people. In a country known for huge inequalities in income and opportunity, Pope Francis denounced as a work of the devil the idea of “a society of the few and for the few.”

“Three great temptations” — wealth, vanity and pride — are behind such an attitude and so many other ills that destroy society and attack human dignity, he said.

The sinful use of money and material things, he said, is “seizing hold of goods destined for all and using them only for ‘my own people.'” It involves living off the sweat and labor of others, “even at the expense of their very lives,” the pope said.

Such “bread,” he said, “tastes of pain, bitterness and suffering. This is the bread that a corrupt family or society gives its own children.”

“We know what it means to be seduced by money, fame and power,” Pope Francis said. “For this reason, the church gives us the gift of this Lenten season, invites us to conversion, offering but one certainty: he is waiting for us and wants to heal our hearts of all that tears us down. He is the God who has a name: mercy. His name is our wealth.”

At the end of Mass, Bishop Oscar Dominguez Couttolenc of Ecatepec told the pope that “like many other places, we experience poverty and violence, made flesh in the pain of those who suffer because of corruption, hunger, poverty and all the manifestations of evil that lead to the deterioration of our common home.”

In response, he said, the faithful of Ecatepec pray, reflect and work, trying to live a “spirituality of communion,” a sense of solidarity strengthened by the pope’s visit.

Before landing by helicopter in Ecatepec, Pope Francis was treated to a special aerial viewing of the nearby Teotihuacan Pyramids, believed to date from about 300 B.C.