Missionary’s life: poetry and prayer in a troubled land 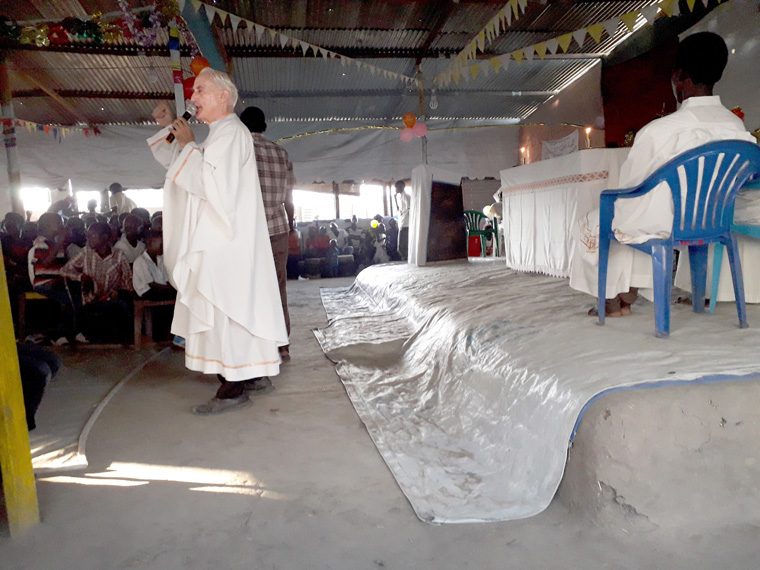 There are only two seasons in South Sudan, missionary Father Michael Bassano says.

By the middle of October, the season of rain ends. Then comes the dry season, from October to April.

Apart from the climate, Father Bassano, a Binghamton native, would love to see one continuous season of peace in South Sudan, a country that has endured a civil war. It is a wish that spurs him to poetry (see box at right) and prayer.

CNS reported earlier this year that a fragile peace existed in South Sudan. CNS said, “South Sudan’s five-year-long civil war has killed almost 400,000 people and displaced millions, while more than 1.5 million people in South Sudan are on the brink of starvation and more than 6 million people, half the population, face extreme hunger, according to the United Nations.”

Father Bassano called the Sun recently from South Sudan and reported that President Kiir and Machar had agreed to form a transitional government Nov. 12.

But he also reported that two weeks of fighting had been going on between opposition and government forces. He said the United Nations came out with a report saying there has been an increase in South Sudan in recruiting children as soldiers. The UN report, he said, also cited a fear that if the transitional government fails, there will be a return to full-scale violence.

Father Bassano said: “We hope and pray for the best. … We pray, we wait, and we see what happens.”

He is the Catholic chaplain in the United Nations Protection of Civilians (POC) camp outside the town of Malakal. The camp’s population is about 37,000 people, and up to about 3,000 of them are members of his parish.

The parish held two weeks of practice for a special Mass on Children’s Day, Oct. 1, the same day as the Memorial of Saint Thérèse of the Child Jesus, Virgin and Doctor of the Church. The children sang, danced, and did the readings for the Mass.

Other church members were getting ready for Oct. 10, the feast day of St. Daniel Comboni. According to the U.S. Conference of Catholic Bishops, the saint “spent nearly all of his priesthood in Africa and was named a bishop and apostolic vicar to Africa in 1877. He died in 1881 and was canonized in 2003.”

“A priest with some of his parish members walked for 10 days from Akobo [about 150 miles away] to get to the ceremony in Malakal,” he said.

A week after his consecration, Father Bassano said, the new bishop celebrated Mass in the POC camp and gave a name to Father Bassano’s church: the POC Cathedral Church of Malakal.

Bishop Nyodho said most of the parishes in Malakal had been looted in fighting and so all the people came to the POC camp, Father Bassano said.

“He thanked the people,” he said, “because they were the ones who continued to build up the Church” in a time of crisis.

“That’s quite a compliment for people who have suffered so much for six years to hear that,” Father Bassano said. “Wonderful thing to say to our people here in the POC, that it is a special church, a special place during a time of conflict.”

Father Bassano periodically writes poems inspired by his missionary service in South Sudan. His latest poem, sent to the Sun on Oct. 2, is below.

Being stewards of creation
our breathing planet alive
what can we do
to ensure she does survive.

Standing in awe
of an arc in the sky
praying things will improve
says my heart with a sigh.