Much of Puerto Rico still has no power; aid distribution facing obstacles 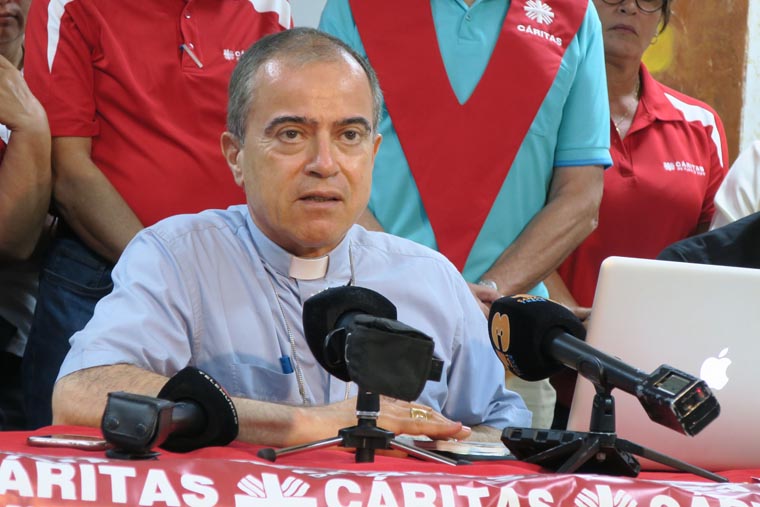 CAGUAS, Puerto Rico (CNS) — The only way a military veteran who works for the Diocese of Caguas could get a message out from Puerto Rico to contacts elsewhere illustrates conditions in Puerto Rico nearly three weeks after Hurricane Maria made landfall on the island Sept. 20.

“He sent the email from his car in the mountains — the only place where he can charge his phone and get some periodic reception,” reported Joe Boland, vice president of mission at Chicago-based Catholic Extension.

He got word from the veteran “that they have armed guards at gas stations. Communications and transportation are still a mess,” Boland said in an email sent to Catholic News Service in Washington Oct. 10.

After surviving the devastation wrought by Maria, Bishop Eusebio Ramos Morales of Caguas finally reached a functioning land line at one of his parishes and the first phone call he made was to Catholic Extension.

The bishop reached Boland and described the island of 3.4 million people as being in a total state of chaos. He said the Catholic Church was paralyzed due to the inability for anyone to travel or communicate. He reached out, hoping that Catholic Extension could help in some way.

A week after Maria hit, Catholic Extension was able to send $325,000 in relief funds for the six dioceses of Puerto Rico, with another $25,000 going to the U.S. Virgin Islands, which were hit by hurricanes Irma and Maria.

Catholic Extension is a national fundraising organization that helps build churches and supports church ministries and other efforts in U.S. home missions. It has had a decades-long relationship with Puerto Rico. It first assisted the Archdiocese of San Juan with a church-building project in 1908.

“Catholic Extension is once again stepping forward to assist Catholic churches in need, continuing its century long mission of building faith, inspiring hope and igniting change,” said Chicago Cardinal Blase J. Cupich, chancellor of Catholic Extension, in a statement. “Chicagoans once again have a reason to be proud that Catholic Extension has its roots here.”
Other agencies that have provided aid include Catholic Charities USA, which sent $1 million in emergency aid to Caritas Puerto Rico, and the Knights of Columbus, which has sent $100,000 in aid.

As of Oct. 10, just 16 percent of electricity service had been restored. At an Oct. 6 news conference, Gov. Ricardo A. Rossello told reporters officials expected to have 25 percent of the electrical system restored “within the next month.” About 67 percent of cellphone towers remained down.

Most Puerto Ricans are still struggling to get basic necessities — food, water, fuel, medicine, currency — and several relief organizations continue to face obstacles getting aid to those who need it most because of fuel shortages, and a majority of the roads are in ruins. The New York Times reported that only 392 miles of the 5,073 miles of the island’s roads are open.

At least 43 people have died as a result of the hurricane; officials said that number could rise as communication systems improve.

Archbishop Roberto Gonzalez Nieves of San Juan announced at a news conference Oct. 10 that the Catholic Church in Puerto Rico has already helped at least 50,000 affected by the Hurricane Maria with food and clothes.

A few days after the hurricane hit, Archbishop Gonzalez’s staff sent an email to Catholic Extension at his request with a subject line that said: “WE WILL RISE!” It asked for help to “lift our diocesan infrastructure and (support) the parishes with the biggest damage.”

Catholic Extension said it has been “extraordinarily difficult for the Puerto Rican bishops and diocesan leaders to communicate with us, because provisional cellphone towers are only located in certain places and only function during certain hours. It is even hard for them to communicate with one another because many roads are still blocked or ripped up due to mudslides, and gasoline is nearly impossible to procure.”

As a result, it has been difficult for dioceses to assess the extent of damage to church property.

Beyond the obstacles to getting around to assess property damage in Puerto Rico’s six dioceses has been the challenge of getting the Catholic Church on the island “up and running again without having any sources of income for the foreseeable future — paying staff, keeping the lights on, and maintaining operations,” as well as “dealing with the humanitarian crisis” that is ongoing in terms of “feeding and sheltering people.”

Catholic Extension said it will help with the rebuilding and repairing of churches destroyed or damaged by Hurricane Maria, but, the statement said, that “will be a priority down the road.”

The organization is accepting donations at www.catholicextension.org/give/hurricane-support, with the amount to be matched dollar by dollar by some of Catholic Extension’s longtime donors.

Health care workers continue to sound the alarm about dire conditions and countless numbers of residents they say are still in desperate need of assistance.

Brock Long, administrator of the Federal Emergency Management Agency, said 16,000 federal and military assets are on the ground in Puerto Rico and about 350,000 Puerto Ricans have registered so far in the FEMA system to receive financial assistance.