Pope is ‘not afraid of looking at reality,’ speaker says 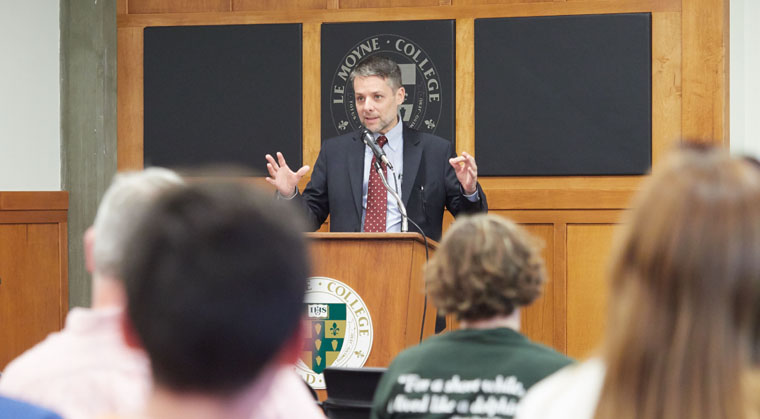 The synod that began Sunday and runs through October 27 is expected to address how Catholics in the nine-nation region can respond to devastating effects of climate change there. The meeting also will likely consider ordination for married men and the role of women in ministry in areas where Catholics cannot easily access Communion or other sacraments.

“Pope Francis is not afraid of looking at reality. This is an incredible moment,” Faggioli said October 1. The synod, he said, comes amid “a moment of instability in the Catholic Church, but also of global disruption.”

In her introduction, Sanzone Center director Nell Champoux praised Faggioli for balancing “careful historical and theological exposition with a strong attention to how dynamics of the past shape the present and future.”

Faggioli’s newest book, “The Liminal Papacy of Pope Francis,” will be published by Orbis Books in March. He is also a contributing writer for the Catholic publications Commonweal and La Croix International.

Pope Francis is “dealing with a church that within itself is showing some symptoms of a disruption that is not entirely different from what’s happening either in the States, in Brexit, or in his own Latin America,” Faggioli said. “Political affiliations and ideologies have infiltrated the Catholic Church more than ever before.”

That has led to “the re-emergence of some questions that we took for granted until a few years ago,” he said, citing issues including liturgy, the sacraments, and migrant and immigration issues.

Pope Francis is best understood in the context of broad culture wars, he said. For example, the sex abuse crisis in the Catholic Church has led to “almost complete loss of trust in the institutions of the church,” Faggioli said.

In the Amazon region, women “are the only minister that most Catholics will see their lifetime,” he said. Amid this reality, the pope “has lifted the prohibition to talk about” women in ministry.

Pope Francis has called for “a church where things are discussed and decided horizontally, not top down,” Faggioli said. “He says the church should be an example of how to keep some institutions that were conceived to protect those who have no power.”

Faggioli visited Le Moyne a day after Pope Francis invited Jesuit Father James Martin to a private audience, during which they discussed ministry to LGBT Catholics. Father Martin, Le Moyne’s 2011 commencement speaker, is the author of “Building a Bridge: How the Catholic Church and the LGBT Community Can Enter into a Relationship of Respect, Compassion, and Sensitivity.” The 2017 book has been endorsed by some Catholic bishops but has spurred protests and canceled speaking engagements at some Catholic institutions.

The September 30 meeting — documented with a Vatican photo of the two in the pope’s private library — exemplifies the pope’s style, Faggioli said.

“The meeting was the message,” he said. “It’s not an endorsement of the person of James Martin, but it’s a message that Francis thinks that in the Catholic Church the fact that there are many LGBT Catholics and there are also gay priests is something that needs to be understood in a way that’s different from the way it has been understood until a few years ago.”