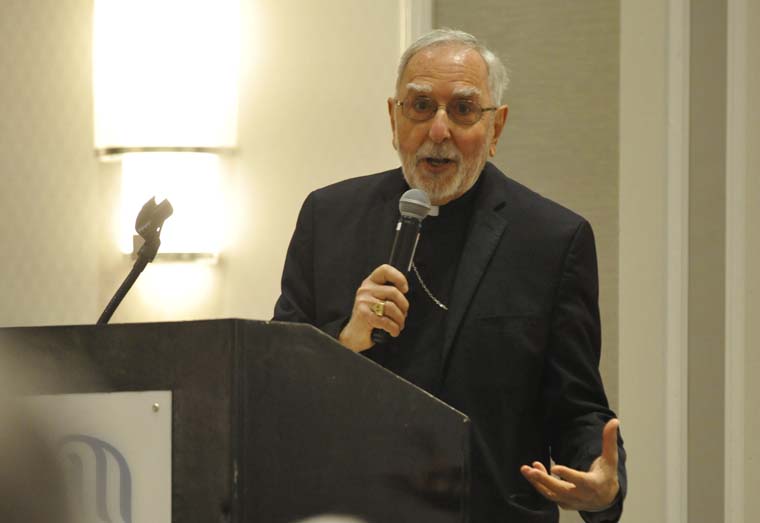 NEW ORLEANS (CNS) — Bishop Gerald F. Kicanas was rector of Mundelein Seminary in the Archdiocese of Chicago in the 1990s when then-Cardinal Joseph Bernardin was falsely accused of sexually abusing a minor seminarian during his previous tenure as archbishop of Cincinnati.

The agony of having to endure those humiliating charges — the accuser later recanted, removed Cardinal Bernardin’s name from his abuse lawsuit and reconciled with him — changed Cardinal Bernardin forever, Bishop Kicanas told the Louisiana Priests’ Convention in a keynote speech Sept. 21.

But he changed in a way that strengthened his reliance on God in everything he did, said the bishop, who heads the Diocese of Tucson, Arizona, and is the former vice president of the U.S. Conference of Catholic Bishops.

“When as priests we are in touch with our own weakness, only then can we enter the pain and brokenness of others,” Bishop Kicanas said.

“His name (was) on the headlines of every area newspaper,” Bishop Kicanas said. “I remember getting a call from the cardinal two days after the allegation became public. He said that he was concerned about the seminarians. He worried what they might be thinking, how they might be feeling. He asked if he might come out to the seminary and say some words and maybe answer any of their questions.”

Bishop Kicanas said Cardinal Bernardin visited Mundelein the following week and spoke directly with all the seminarians in a large, tiered room.

“As we entered the room, everything quieted down,” Bishop Kicanas recalled. “You could hear a pin drop. The cardinal gave a brief comment, and then he asked if they had any questions. Well, no one said a word. Finally, one of the seminarians cautiously raised his hand and asked, ‘What has it been like for you?’”

Bishop Kicanas said Cardinal Bernardin “paused for a seemingly interminable time” and finally said, “I was totally embarrassed, totally. Here I am, the cardinal archbishop of Chicago, accused of sexual misconduct with a minor, my name on the headline of every newspaper, even in my (family’s) hometown in Italy. I was totally embarrassed.

“I went home that night all by myself,” he continued. “I entered my home and walked up the darkened staircase to the second floor where my room was. I entered the room surrounded by all the honorary degrees and gifts that I had been given by so many. I prostrated myself on the ground as if I were naked.”

Bishop Kicanas said Cardinal Bernardin told the seminarians that “at that moment of utter weakness, I experienced the Lord present in my life in a way I had never ever experienced before.”

The “irony of the spiritual life,” Bishop Kicanas said, is that when “we lose our life, we find it; and when we hold on to our lives, we lose it.”

“That experience of utter weakness and the cardinal’s later diagnosis of pancreatic cancer made him totally vulnerable,” Bishop Kicanas said. “But something happened to him as a result of these two devastating experiences. He became so sensitive to the hurt of others.”

At one of the healing services being conducted around the archdiocese before the cardinal died, Bishop Kicanas said, he was celebrating Mass for an African-American community when “right in the middle of Mass … a woman came up the stairs of the dais.”

“The priests concelebrating panicked and tried to get her to go back to her place,” Bishop Kicanas said. “But the cardinal invited her to his chair and listened to her cry for help. His own encounter with weakness made him no longer merely an administrator, but now a pastor, a shepherd who like Christ felt compassion for the flock, harassed and helpless.”