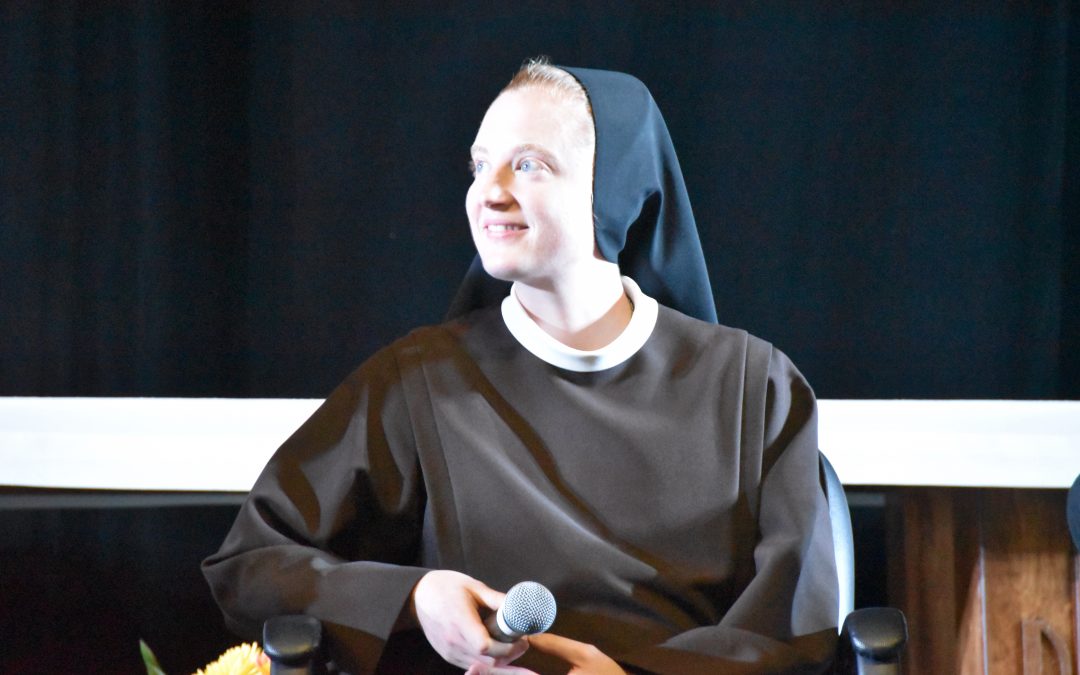 More than 1,000 sisters in Christ gathered for the annual Syracuse Catholic Women’s Conference at the Oncenter Oct. 28, joining together as the largest crowd in the event’s history for a day of speakers, prayer, and fellowship.

The conference’s aim is “evangelization, conversion of our own hearts, [and] seeking a deeper relationship with the greatest servant of all, our Lord and Savior Jesus Christ,” said conference chair Ellen Benton.

Attendees also heard from Judy Studer, president of the Rhode Island Diocesan Division of the World Apostolate of Fatima. Studer is the custodian of the United Nations Pilgrim Virgin Statue of the World Apostolate of Fatima, which was on display throughout the day, alongside relics of Sts. Jacinta and Francisco Marto, two of the young children who witnessed Mary’s apparitions at Fatima in 1917.

The Sacrament of Reconciliation was available throughout the day, thanks to 13 priests from around the diocese. Attendees could also browse the offerings of more than 40 vendors.

Following adoration and recitation of the rosary, Sister Ignatia kicked off the day’s speaking program. Sister Ignatia was raised in Mexico, where she and her family attended St. Anne, Mother of Mary Parish. She discerned a call to religious life while studying at Franciscan University of Steubenville and entered the Sisters of Saint Francis of Perpetual Adoration in 2010.

Sister Ignatia entitled her talk, “The service of motherhood: A sign of hope in the world.”

She spoke about a commonality among all the women present, including herself as a woman religious: the universal call to motherhood.

“I think we truncate what motherhood is,” she said. “I, too, am a mother. Regardless of whether or not one of us has borne physical children or not, we share in a very foundational and much-needed motherhood that our world doesn’t see very much at all.”

“Motherhood is not something I do,” Sister Ignatia affirmed. “It’s who I am. Motherhood is who I’m called to be.”

Father Gaitley made his return to the conference stage, having first spoken there in 2013. He is the Director of Evangelization for the Marian Fathers of the Immaculate Conception, the director of Formation for the Marian Missionaries of Divine Mercy, and a bestselling author of books including 33 Days to Morning Glory and his latest, The Second Greatest Story Ever Told.

His talk related that “second greatest story ever told” (after the Bible, of course), weaving together the history of Poland; the witness of its saints and its son, St. John Paul II; and the promise of Divine Mercy.

“It’s important that we not forget the great intuition of John Paul II, something that he received in his prayer, which is that now is the time of mercy,” Father Gaitley said.

What was that intuition? “I think it was that John Paul — he understood our world very well. He saw that while there’s many blessings in our modern world, there’s also a sense in which evil has a reach in our day unlike any other time in the history of humanity. But for that very reason, now is the time of mercy.”

It comes down to Romans 5:20, he said: “‘Where sin abounded, grace abounded all the more.’ In other words, in a time of great evil, God wants to give even greater grace.”

We shouldn’t be discouraged, therefore, and we should remember the good news that now is the time of mercy, that God is giving great grace, that evil does not have the final word, he said.

Michael Dopp, founder and president of Mission of the Redeemer Ministries and of the New Evangelization Summit, closed the speaking program.

God can do in our lives what he did in the lives of the saints, he said.

“Not only will he do it, it’s what he longs to do. It’s what he’s good at. Jesus is good at making great saints. We have to allow him to do it,” Dopp said.

The day ended with a question-and-answer session with the speakers, recitation of the Chaplet of Divine Mercy, and Mass celebrated by Bishop Robert J. Cunningham.

Organizer Benton said she was thrilled with the turnout and the day’s lineup. “I hope [attendees] walk out the door with a deeper sense of their baptismal call to use their gifts to unite their will with Jesus’ will to bring the Kingdom of God to earth.”

See photos from the event on the Catholic Sun’s Facebook page.