Rice Bowl: ‘For I was hungry and you gave me food’ 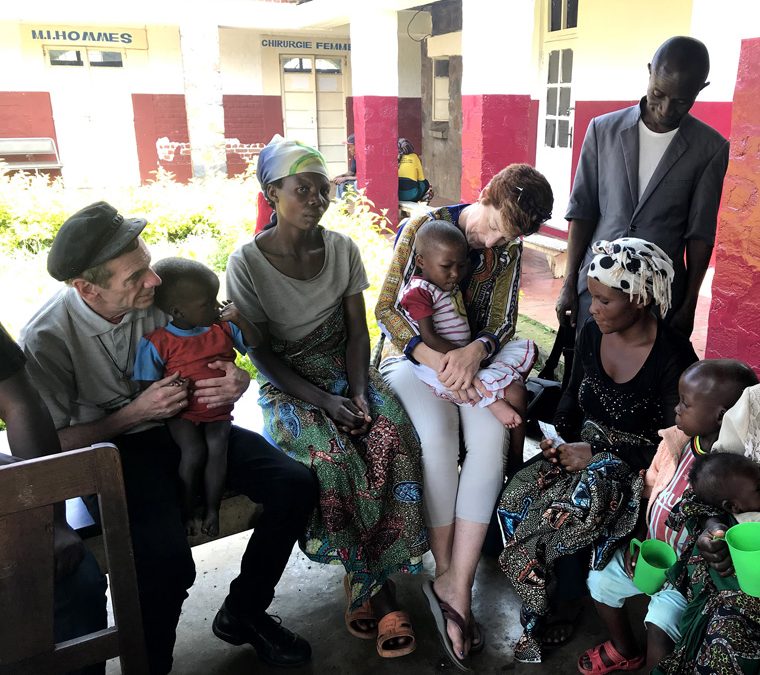 Peter Daino has spent most of his life — 42 years — working in Africa. On Aug. 15, 2011, in southeastern Africa, robbers stole $5,000 that his father had given him back in his native Endwell.

A few months later, he came back to Endwell; then he spent seven months at a Benedictine monastery on the Hudson River. A number of things came together that suggested that he shouldn’t hang up the missionary boots just yet.

He has served in Niger, Kenya, Malawi, and Congo — he started three trade schools in Kenya and one in Malawi; the people learned carpentry, electrical installation, and bricklaying.

Now Daino is in Syracuse, serving as the pastoral associate at All Saints Church, where he said the pastor, Father Frederick Daley, always talks about going upstream to help stressed people.

One way to do that is through Catholic Relief Services’ Rice Bowl. During Lent, parishes hand out the cardboard “rice bowls” and ask people to bring them back full of donations.

“More than 40 years ago, Catholics in the United States wanted to respond to famine in Africa. Could people who were hungry and starving be helped through Lenten prayers, fasting, and almsgiving? The answer was yes — and the help came in the form of a small cardboard box, marking the beginning of ‘Operation Rice Bowl’ in 1975 in parishes in Allentown, Pennsylvania. Today, CRS Rice Bowl is a tradition for millions of Catholics in the U.S., who employ the Lenten pillars of praying, fasting, and almsgiving to change the lives of others while enriching their own. …

Last year, 52 parishes in the Diocese of Syracuse participated in the Rice Bowl. About $14,000 was collected overall, and approximately $3,500 stayed locally; CRS says 25 percent of gifts remain in each U.S. diocese for hunger- and poverty-alleviation efforts.

According to the Rice Bowl website: “Participants are invited to hear stories about their brothers and sisters in need around the world, and devote their Lenten prayers, fasting, and alms to change the lives of those who suffer in poverty.

“Participants journey through the 40 days of Lent with a collection of daily reflections and activities included in the CRS Rice Bowl calendar.”

Daino sees Catholic Relief Services as a “very accountable, responsible organization — one of the unknown secrets of the Catholic Church.” CRS uses Rice Bowl funds for all kinds of food, including corn flour, not just rice, he said.

He has seen the Rice Bowl in action, mostly in Karonga, Malawi, from about 2006 to 2012. Rice Bowl funds help people all around the world, he said, especially in Africa. The project he worked on in Karonga aided 7,500 orphans.

Malawi, in southeast Africa, is a pretty peaceful country but very poor, he said, with “unbelievably nice people, no civil war, fair elections.” Occupations are farming and fishing; tilapia are caught in Lake Malawi, which is about 360 miles long.

Daino was in charge of logistics for the Rosarian Sisters. Each month, as the deputy director of the Sisters’ Lusubilo (meaning “Hope” in the local language) Orphan Care Project, he sent food to 75 villages where extended family members took care of the orphans whose parents had died in the AIDS and HIV epidemic.

The Lusubilo project also built a nursery school in each of the 75 villages and fed the malnourished children and orphans high-protein porridge every day — “that was a really big thing.” Also, the project supported farmers’ efforts to grow corn.

In 2010, the project, operated by Sister Beatrice Chipeta, who died last year, won the Opus Prize, an annual faith-based humanitarian award in partnership with Catholic universities.

During his seven months in the Hudson River monastery, as he contemplated what God wanted next for him, Daino was contacted by the bishop of Karonga about building a boarding school for 600 girls. Daino became the building supervisor, and this June the school, named Saint Mary Girls’ Secondary School, will graduate its first class.

At All Saints Parish in Syracuse, Daino works with 300 Congolese refugees, most of whom live on the north side. “At least we can say we’re trying something upstream,” he said.

The Rice Bowl bulletin announcement for the first week of Lent in diocesan parishes says:

“Hunger in Our World: When Jesus fed the 5,000 he said, ‘Give them some food yourselves.’ Reflect on the challenge of global hunger. How can you contribute to support the hungry in your community? Visit crsricebowl.org for more.”

The website says: “CRS is efficient and effective. In 2015, 93 percent of our expenditures went to CRS programming that benefits poor people overseas. CRS’ programs touch more than 100 million lives.”

The monsignor thinks it is a “good spiritual devotion” to support the works of the Church and to teach children and adults about sacrificing during Lent — “money we’d spend on other things we put in the Rice Bowl.”

Years ago, Father Timothy J. Taugher attended social-ministry workshops in Washington, D.C., and he would see what the Rice Bowl was doing — “always impressive.”

Father Taugher, pastor of St. Francis of Assisi Church in Binghamton, sees the Rice Bowl as a tool, a reminder to people of “what their Lenten season is about.”

He cited Isaiah 58, which advocates “breaking off every yoke” and “sharing your bread with the hungry”; and Matthew 25, about the Last Judgment: “For I was hungry and you gave me food, I was thirsty and you gave me drink, a stranger and you welcomed me.”

Father Taugher sees these early days of Lent as a teachable moment — a “call to justice” that asks us to widen our hearts to the needs of the global Church and to remember the poor, the homeless, and the disadvantaged.

The Rice Bowl campaign, he said, each day has something to do in line with almsgiving, prayer, or charity.

Visit www.crsricebowl.org/recipe for more recipes and video tutorials on how to prepare the meals.