This year’s Lent could be just what struggling church needs 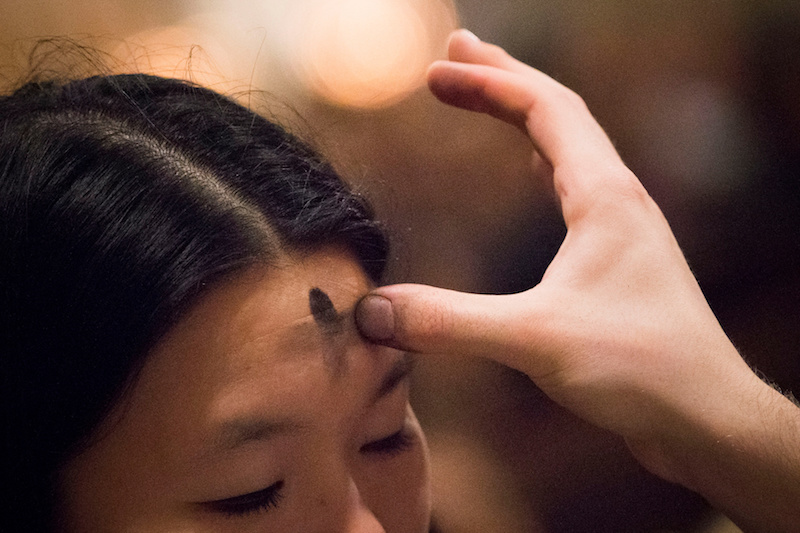 A cross is marked on the forehead of a woman during Ash Wednesday Mass at St. Patrick’s Cathedral in New York City Feb. 14, 2018. After all the U.S. Catholic Church has been through with the abuse crisis, Lent this could be an important time for healing, some church leaders say. (CNS photo | Adrees Latif, Reuters)

WASHINGTON (CNS) — When Lent begins March 6, U.S. Catholics will likely be more than ready for it.

This set-aside time for prayer and reflection — after all the church has been through in recent months — could provide both a healing balm and a needed boost forward, some say.

Ash Wednesday, the start of Lent, is typically a big Catholic draw, filling churches with nearly Easter- or Christmas-size Mass crowds even through it is not a holy day of obligation. Conventual Franciscan Father Jude DeAngelo, director of campus ministry at The Catholic University of America in Washington, hopes this year is no exception.

“We in the American Catholic Church have been through a year of tremendous suffering and tremendous upheaval and frustration” he told Catholic News Service, referring to the past months of allegations of sexual misconduct and cover-up by church leaders.

The priest said some Catholics stopped going to church, “scandalized by the actions of a few” but that he hopes and prays they come back on Ash Wednesday, a day he described as a strong “reminder that God is never finished with us.”

“Ash Wednesday is that moment, I believe, especially this year, when we can say: ‘This is my church. It’s got its sins — it always has had its sins and sinners — but Christ calls me to convert my life to his image and likeness and that call is not for individuals only, it’s for the entire community.'”

By its very nature, Lent has an overall aspect of penitence to it, but that shouldn’t override the whole season, said Paulist Father Larry Rice, director of the University Catholic Center at the University of Texas at Austin.

His recommendation for this year’s Lent is “to do what the church has always asked us to do: prayer, fasting and almsgiving” and that concentrating on those things will bring people closer to God and one another.

“I think it’s important to make some distinctions that might rescue Lent for people this year,” he said, noting that it’s not “supposed to be about sorrow, sadness or anger, which people are justifiably feeling,” in the current church climate. “That is not what Lent is about,” he said, stressing that it should be a personal preparation for Easter.

The 40 days, especially this year, also shouldn’t be an effort of “muscular Christianity” or “pulling ourselves up by our bootstraps” to do Lenten practices, he said. Instead, it offers a time for Catholics to say: “Wow, we have completely hit bottom and we have to depend on God’s grace to build us up again.”

Father Rice said a lot of bishops have called for a year of reparation for the abuses committed by people representing the church, an action that has caused some misunderstanding among Catholics who say: “Why do I have to do it? I didn’t do anything wrong?”

This Lent, “we don’t put reparation on hold, we just get to do both” — personal penance and reparation, he said.

Sister Teresa Maya, a Sister of Charity of the Incarnate Word based in San Antonio, said she has been moved by the expressions of reparation by priests in her archdiocese taking “collective responsibility” for abuse and any cover-up in the church.

The sister, former president of the Leadership Conference of Women Religious, an umbrella group of 1,500 leaders of U.S. women’s religious communities, said it is important for the church to begin with reparation, but it can’t end with that.

“To live in the spirit of Lent there has to be path away from personal and systemic sin” that led to this crisis, something she said she hasn’t seen yet.

Sister Maya said the sacrament of reconciliation, which is talked about a lot in Lent, centers on listening and the church still needs to make it a priority to listen to abuse survivors, but Catholics also need to listen to one another.

For the past eight months or more, this abuse crisis has been “piling up on all of us,” she told CNS, noting that many Catholics are still shell shocked by it and the question that remains is: “How do we move forward?”

That’s where Lent once again comes into play, because she said it provides a time for people to examine where they are personally but also can raise the question “Where are we?” as the Catholic Church in the United States.

And no matter where you fit in the church, as a leader, family member or parishioner, she said the question of what’s next feels different; it’s not the same as it was when the church went through the sexual abuse crisis nearly 20 years ago.

She likened the church now to the time when the apostles were in the upper room wondering what to do next.

“We have to trust our faith in the resurrection, in the grace that God will provide,” she said. “Hold the loss and the grief and hold one another in it.”

This is a “critical moment” to return to the core of what Catholics believe, she said.

Father DeAngelo similarly stressed the need for Catholics to keep going and to support one another.

“We need people to return to the church. We need their criticism; we need to hear their frustrations, their stories” not just survivors of abuse but all who “are unfortunately part of the collateral damage of this scandal, people who are just overwhelmed by these revelations.”

“This moment — Ash Wednesday I think specifically this year — can be even more of a reminder that in spite of everything, the church, called by Christ, is the greatest hope for our humanity.”

Although the church has human failings, he said, it also has a divine call for everyone in it to “go forth” — after facing criticism the church deserves — and never lose sight of its main mission: “to bring life to the world through Jesus Christ.”

Chaz Muth contributed to this story.