Two countries rejoice as one at Christmastime 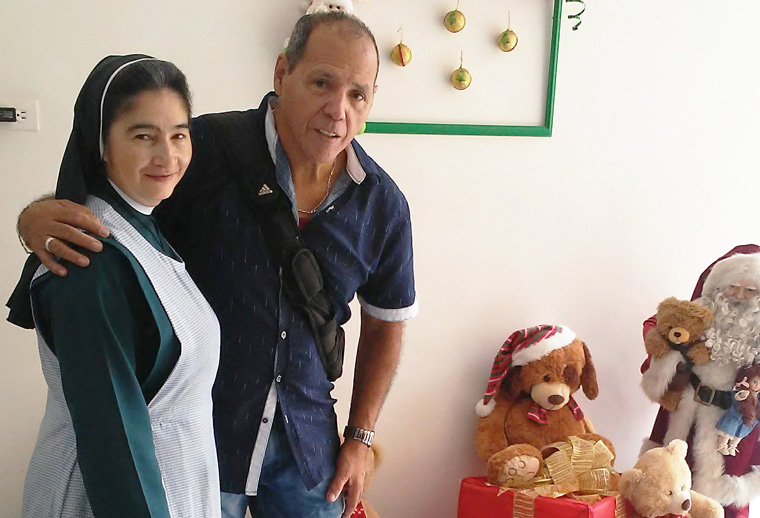 In its 17th year,  Project Smiles brings toys and clothes and rosaries too

His soccer team’s post-game performance prompted a letter to the athletic director.

Coach Vergara, now retired from coaching, told his triumphant players: “I want you to take a good look; look over there — that could have been us. So let’s have some respect for this team.”

Only after Waterville left the field did the Gaelic Knights celebrate with their fans.

One of the Waterville moms sent a note to Ludden’s AD saying that her side appreciated Ludden’s gesture of restraint.

It was a typical move by Vergara, whose consideration for other people now puts him in his 17th year serving as a soccer-loving Santa.

Vergara, the grand orchestrator of his own creation, Project Smiles, will fly very soon to his native Colombia to hand out Christmas presents packed into 20 to 25 boxes that weigh about 90 pounds each. The recipients are young moms and their tots, young expectant moms, and schoolchildren.

“This is my Christmas present to myself,” he said.

Kudos to Mom and Aunt Mira

The “Santa” gene goes back in his family. About 55 years ago, his mother, Nina, and his Aunt Mira would make and sell beef patties for the Divine Providence Home for moms, their children, and expectant moms in Medellin, Antioquia, Colombia.

With the proceeds, the two women bought the home’s first washing machine and refrigerator.

Divine Providence Home is still there, sponsored by the government and run by nuns.

Five of the approximately 40 residents are expected to give birth around Christmastime.

These moms, Vergara said, had a tough time at their former homes; perhaps they were alone with their child, or perhaps they had been abused. Some are victims of the guerillas, who are still a problem on a small scale, Vergara said, although the women are not in danger at the Divine Providence Home.

They live there until they turn 18 or their children turn five. Before they leave, the young women have learned a skill such as hairstyling, doing nails, sewing, or cooking.

Vergara was born in Medellin, called the “City of Eternal Spring” because it doesn’t get below 80 degrees. He has three sisters and five brothers who all live in this country now; two of his brothers have died.

After his mother died as a result of a hit-and-run accident, a relative of Oscar’s spoke with the late Auxiliary Bishop Thomas Costello, who was then the superintendent of diocesan schools. He approved a Bishop Ludden scholarship for the 16-year-old Oscar, who was in an at-risk situation in his native land.

“Had I not been able to get the scholarship,” Vergara said, “maybe I could be a very rich man today, the wrong way; or could be buried six feet underground.” He added that he will “forever, ever be grateful to Bishop Ludden, to the diocese.” He noted that his four daughters all went to Ludden.

He attended Ludden for a year and four months and graduated. He went on to run Big Brothers Big Sisters for PEACE, Inc. in Syracuse and to coach soccer for 43 years, including about 37 at Ludden.

He retired as soccer coach this year, and he continues his part-time job running the senior-citizens program at the Eastwood Community Center in Syracuse, where on a recent day he showed off Project Smiles photos from last year and prepared presents that he will ship to Colombia ahead of his visit to distribute all the goodies before Christmas. The silver duct tape — marked by reinforcing lines symbolic of Santa’s intricate route on Christmas Eve — screeched and stuttered as he peeled it off the roll to cover the giant packing boxes. It costs good money, and the shipping isn’t cheap, either.

Eastwood Community Center program assistant Gerri Regan said of Project Smiles, “I think it’s the best program in the world, I do. … It’s near and dear to Oscar’s heart.”

Into the pink knapsacks that Regan bought for the Project Smiles children go many presents including clothing, stuffed animals, personal-hygiene items, toys, and candy. Vergara’s project, she said, provides the “Christmas that they wouldn’t have without him.”

Rollin Mincher, the manager of Eastwood Community Center, is a Ludden grad himself, Class of 1985.

“Oscar’s like a latchkey kind of guy; people just go to him,” Mincher said. He noted that the people of the Eastwood Community Center have assisted Project Smiles.

A member of Eastwood’s seniors group, Pauline Tucci, of Syracuse, came in to talk to Vergara about providing Project Smiles with rosaries made at the CNY Marian Center.

Asked how she herself has benefited from the rosary, she said: “Got me through some difficult times, some sad times, some unhappy times. … I try to pray for everybody that needs prayers, including me.”

“The kids who are doing this project, just great kids,” Vergara said.

Recently Bearer’s seniors were packing what she hoped would be about nine total boxes for Vergara to ship to Colombia. Other members of the Grimes community also chipped in.

All those Grimes presents are destined for Project Smile’s aid to Otra Banda Rural School in Sopetran, Antioquia, Colombia, about an hour and a half outside Medellin.

The school has about 23 children ages two to about eight.

Grimes senior Nico Perez said each person selects a child from Vergara’s list and provides presents favored by that child. For a boy about eight years old, Perez selected a soccer ball, a LEGO car, shorts, shirts, and other items.

“These kids [at the school in Colombia] struggle a lot,” Perez said, “and we thought it’d be just great to give them something that they usually don’t get on Christmas.”

Classmate Colin Debejian said, “I like to give to others that do not have what I have, so I joined Spanish to do volunteer stuff.” For an eight-year-old boy, Debejian purchased presents including bobbleheads and clothing.

Senior Matt Tarby’s gifts for a boy named Rafael include a mini soccer ball, Hot Wheels, clothes, crayons, and a mini skateboard that fits in a backpack. “They don’t really have much,” Tarby said of the beneficiaries of the gifts.

“It makes you feel good when you do stuff like this,” senior Joe Wike said. He supplied Spiderman shoes, toy cars, a nice soccer ball, and a little soccer outfit.

“We do like to do a lot of community service,” senior Trevor Sikorski said. The boy on his list “likes Spiderman and motorcycles. So I bought him Spiderman riding on a motorcycle.”

Classmate Carrie Wilkinson drew a seven-year-old girl named Sophia. She bought her a “pretty dress with flowers on it,” shoes to go with it, a Barbie doll, a baby doll, and “a big blanket with a pillow that’s an animal; I think he’s a dog.”

Project Smiles “really benefits the children,” she said, “because their parents can’t afford it, so it’s good that we did that.”

She also wrote Paulina a letter: “I told her I hope she likes her presents.”

Bearer’s seniors also did a candy sale at the beginning of the year, assisted by members of the National Honor Society. When he visited Grimes to pick up the boxes of presents on Dec. 4, Bearer’s group planned to surprise Vergara with a check for $1,800 from the sale.

“We told him there might be a little extra but we haven’t told him how much,” she said.

Also helping Project Smiles is Manlius Pebble Hill School. Their contributions of presents will benefit Hogar Judith Jaramillo, a home for 92 girls ages six to 18 in the very small village of Bello in Antioquia, Colombia. Residents might include girls who ran away from home because of situations that put them at risk.

This weekend, Oscar and his brother Francisco will make the five-hour midnight run to a warehouse in New Jersey to drop off all the tightly packed boxes for shipment to Colombia. Then a week later Oscar will fly there to complete his mission as Mr. Soccer-turned-Soccer-Santa — “make my rounds.”

Basically, the monies that he got paid for coaching, up to around $4,000, always went to Project Smiles. But now he’s not coaching and he works only part time. So every little bit of assistance that he gets is appreciated.

Vergara will stay in Colombia for five weeks; then comes the brutal part of saying goodbye to the children.

That’s when Soccer-Santa sheds a tear, albeit a tear of joy for the goodness of it all.