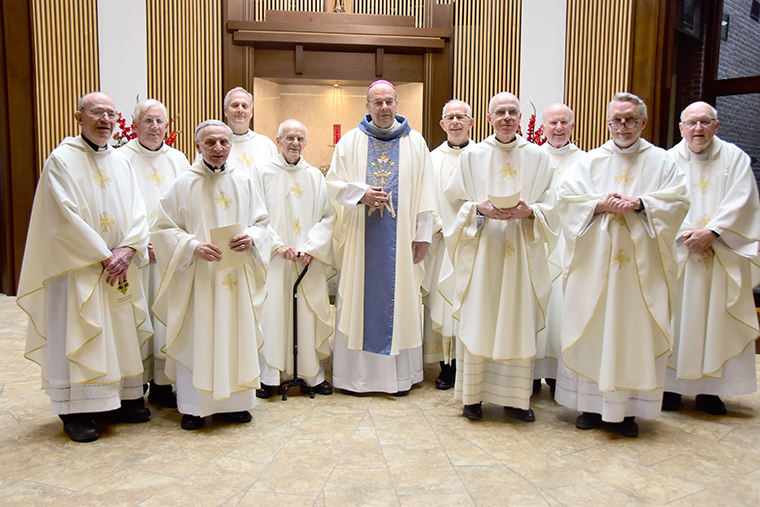 Immaculate Conception Church in Fayetteville was the site on Monday June 6, where the Jubilarian Mass for 12 priests was celebrated to honor their service to the Diocese of Syracuse. Their anniversaries ranged from 25 to 65 years of priestly service.

Fr. Schoenhofen gave the homily for the occasion, sharing that “gratitude brings us here this afternoon, and fittingly so.” Father added that Jubilarian priests have no better way “to express their gratitude to the Lord for the gift of priesthood than by offering the Eucharist.” Father Darr quoted the Catechism of the Catholic Church, describing Eucharist as “a sacrifice of thanksgiving to the Father.”

The Mass was celebrated on the new memorial of The Blessed Virgin Mary, Mother of the Church, added by Pope Francis in 2018 and now observed on the Monday following Pentecost. Fr. Schoenhofen said that “perhaps it’s no accident” that the Jubilee celebration fell on this day, adding that “from Mary, from the woman of faith, do we need to learn anew how to wait for God, how to say yes to God, how to be thankful to God, and how to re-consecrate ourselves to the Lord as priests, even in, especially in the darkest of times.”