St. Matthew’s: a work of art in East Syracuse 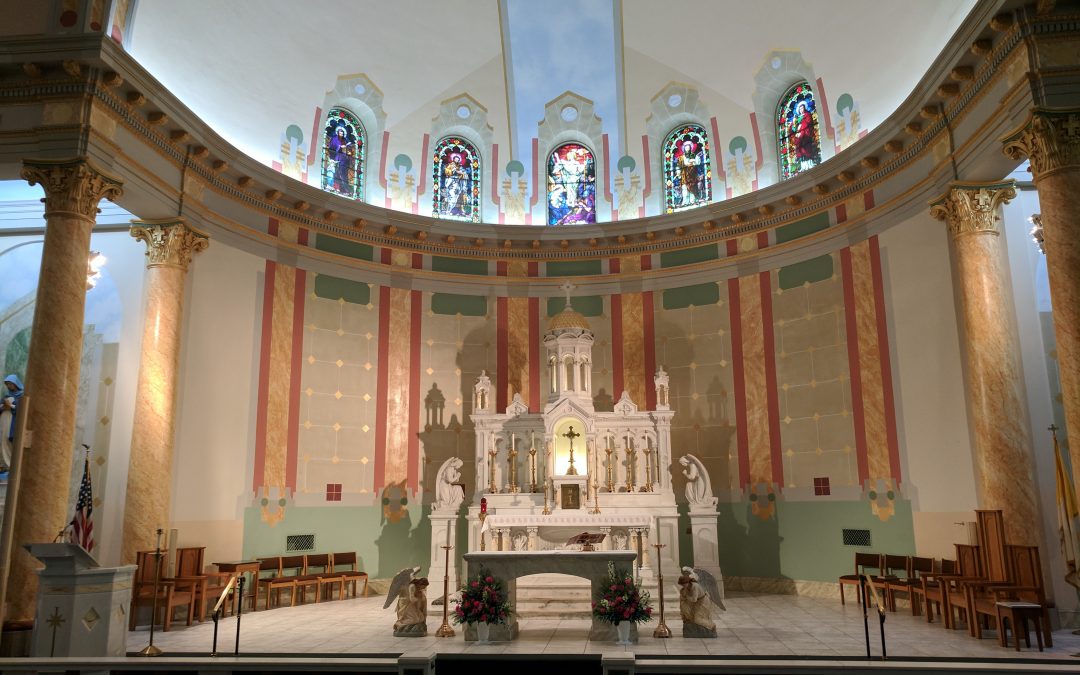 The vintage oil painting of St. Matthew Church seems, with its silvery details, to capture every bump and curl of the stonework.

“I’m going to really miss that painting,” said parishioner Jerry E. Seabrook. “But it’s going to a better and nicer home. … And that’s where it belongs.”

The picture will be reframed and sitting on the altar as the East Syracuse church celebrates the 100th anniversary of its rebuilt edifice Sept. 21 at a Mass officiated by Bishop Robert J. Cunningham.

The church, rebuilt in 1917, dates to 1878. Around 1959 or 1960, Seabrook said, professional painter Helen Dykeman, who lived across the street from St. Matthew’s, created a painting of the church in anticipation of the 50th anniversary of the rebuilt ediface in 1967.

But in 1962 Dykeman’s family moved to Morrisville and magnanimously gave the painting to Seabrook. Why magnanimously? Because in the process of helping them move, he unintentionally destroyed the transmission of their big green truck, which refused to shift out of first gear. “They were very, very nice people,” Seabrook recalled.

Dykeman told Seabrook that she wanted the painting to stay in the village, with the understanding that if he gave it away, he must give it to the church.

He even contacted the artist’s daughter out of state, and she told him: “‘You do what Mom wanted you to do.’”

Seabrook is parting with the painting even though it reminds him of two cherished priests who served at St. Matthew’s when he was young. They helped him while he was mourning the loss of both parents five months apart.

Joe Paone, head of the linked parish council for the parishes of St. Francis of Assisi, Bridgeport; St. Mary, Minoa; and St. Matthew, and also head of the centennial celebration, said he walked into Seabrook’s home one day, saw the painting, and said, “‘That looks like our church.’”

Paone realized the 100th anniversary of the rebuilt church was coming up. He told the pastor, Father Sean P. O’Brien, who said, “‘Let’s do it,’” and Father O’Brien set the celebration for St. Matthew’s feast day.

The parish has just completed a lot of repairs on the inside of the church. “It’s gotta be one of the best-looking churches around inside,” Paone said. The interior still embodies the old-fashioned church going back to the 1950s and ’60s.

Whenever he asks for help with a project, the parishioners comply, Paone said: “You don’t have to struggle.”

One of those helpful parishioners is Lorene Dadey. A lifelong parishioner of St. Matthew Church, she is a member of the Tri Parish Advisory Council. She is also a PCA facilitator for Bishop Robert J. Cunningham, and she helps with the St. Matthew’s Annual Lent Fish Fry. She is a past president of St. Matthew’s Parish Council.

In an email, Dadey said she is proud of St. Matthew’s because it has “a strong sense of community and it feels like home. We have many outreach programs that not only serve St. Matthew’s parishioners but the community at large. During the time when we did not have a pastor, our strong foundation of faith and community was still very apparent. St. Matthew’s is very fortunate to have many volunteers, both young and old, that step up to the plate when needed.

“It has been a privilege and an honor to serve this wonderful community.”

Father O’Brien appreciates the efforts of all who help the parish.

He said in an email: “One hundred years of Faith, Family, and Friendship celebrated in this particular church building. Parts of construction delayed because of World War I. The windows remained unharmed, as the allies bombed Germany during the war, and the windows made it safely from the German harbor to East Syracuse. During Father John Heagerty’s tenure as pastor, all windows removed and wood frames rebuilt and windows reinstalled. During Msgr. James Bennett’s tenure as pastor, The Monterays got their start playing for friends at dances held in the basement.

“For 50 years, the St. Matthew’s Food pantry and Second Time Around store have served the people of East Syracuse, meeting their basic needs. Bells of St. Matthew’s Church have brought music to the people of East Syracuse and they have become a tradition in the neighborhood. When the bells were being repaired I received concerned calls as to why the music stopped. St. Matthew’s and East Syracuse as a whole, make such a great community that over half of the 11 pastors, since 1880, have stayed for more that 12 years, four of them staying for over 20 years.”

According to a booklet on the history of the church, Pastor Heagerty wrote a letter to the parishioners in April 1980: “On this occasion my prayer and hope is that we will continue to be a family of faith. With God’s grace and our devotion, we shall … [enjoy] another 100 years of God’s presence among us.”

In a Jan. 4, 1980, letter to Father Heagerty, now retired Auxiliary Bishop Thomas J. Costello wrote: “Parish anniversaries are particularly joyous occasions because they call to mind all of the joy that has been extended to so many people over a significant number of years. … It is through the loyal dedication of preceding generations that we can celebrate with pride on this occasion.”