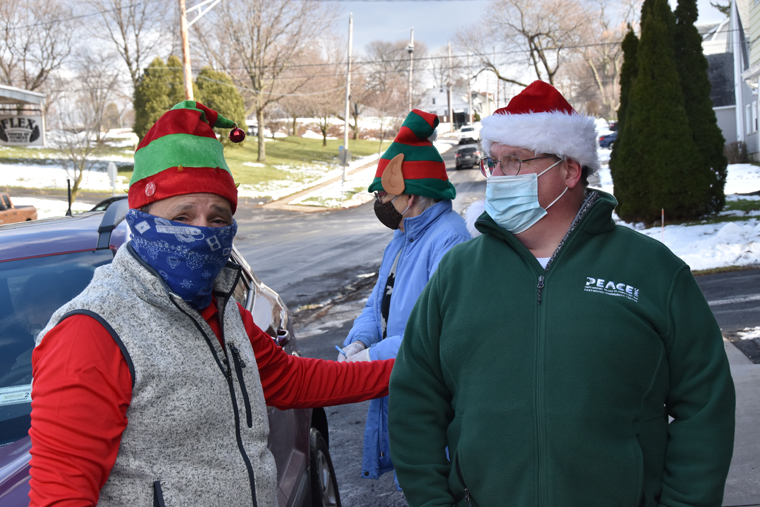 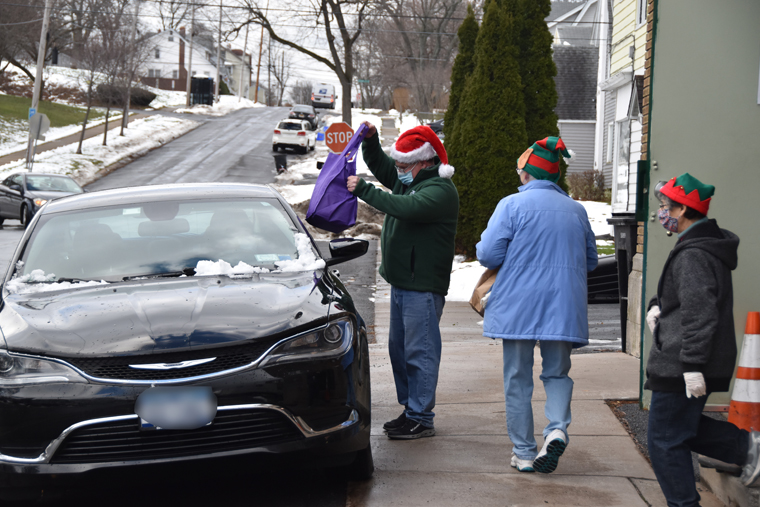 The good elf wears sandals, but not this time.

On Dec. 22, a day when he normally enjoys 85- to 95-degree temperatures and hands out Christmas presents in his native Colombia, Oscar Vergara instead stood in a cold wind, his elf hat pushing down on his ears and his hands seeking warmth in his pockets outside the Frank DeFrancisco Eastwood Community Center in Syracuse.

Vergara was helping to distribute the drive-through Christmas lunches at the center where he coordinates the program for senior citizens.

The lunch giveaway was appreciated by all, including the man who called out “Ho-ho-ho.” But for 17 consecutive years until the coronavirus pandemic hit, using his own money and donations, Vergara ran his “Project Smiles”: He loaded dolls, toys, clothing, and candies into 20 to 25 boxes weighing about 90 pounds each and sent them to Colombia for young moms and their tots, young expectant moms, and schoolchildren.

Then he flew to Colombia and attended the Christmas parties where those young people who have seen tough times in their lives sang Christmas carols upon his arrival and opened the presents.

“I admire him greatly for that,” said senior Mary Anne Barth, who lives about three blocks away and participates at the community center.

“Things are the way they are right now,” Vergara said. “We all have to be careful, we have to ride this through, and hopefully next year we’ll all be back in shape and get out there and continue business, as long as the Lord gives us health.”

In his youth, Vergara received a scholarship to attend Bishop Ludden Jr./Sr. High School in Syracuse so that he could escape an at-risk situation in Medellin, Colombia. He went on to run Big Brothers Big Sisters for PEACE, Inc. in Syracuse and to coach soccer for 43 years, including about 37 at Ludden.

Now he works part-time for PEACE’s seniors operation at the community center, which is closed by directive of the state during the pandemic. He checks on the seniors by phone, and the seniors call one another too.

So instead of lunch inside and then bingo the next day, the seniors followed the yellow arrows on the road and drove their cars to the spot where they accepted bags of lunch consisting of pot roast, mashed potatoes, gravy, green beans, and cheesecake, and also a goody bag.

“Everybody gets a [fleece] blanket,” said another Bishop Ludden graduate who was putting the goodies in the cars, Eastwood Community Center Director Rollin Mincher.

Sixty-three seniors received their drive-through lunches, and 11 seniors who are homebound got theirs delivered.

Seniors agreed that Mincher and Vergara represent a Ludden education in action in the real world.

“I think they should have a plaque of them at Bishop Ludden,” said Mary Ann Zalewski, who accepted a lunch with Rosemary Wood; they are both from Lakeland.

Asked what impresses her about the Ludden duo, Zalewski said, “Compassion is No. 1. Understanding.”

Wood added: “This is a friendly, family-oriented community center.”

“You need to socialize, you need to have company,” said another senior participant, retired Registered Nurse Pat Carroll, of Solvay, a Catholic Sun subscriber who belongs to St. Daniel Church in Syracuse.

“He’s always looking after us, and making programs, figuring out programs for us,” she said of Vergara. In the early summer, she said, the seniors put their masks on and took a lake trip with him. The pre-pandemic activities for the center are listed online as nutrition lunches, wellness programs, dancing, card games, day trips, celebrations, and more.

“They’re two beautiful young men,” Syracusan Angela D. Murphy said of Mincher and Vergara. “I can say that ’cause I’m 91 years old. … They are just wonderful, they’re very welcoming. … They have many volunteers here. They have all kinds of activities for us.”

“They are just so good with looking out for the needs of the elderly in the community,” local resident Barth said of Mincher and Vergara, “and even Oscar when he was on vacation was still giving of himself in [Colombia]. He has so many great qualities, as does Rollin and Sharon [Morrison, Kitchen Manager].”

The drive-through luncheon during the pandemic, he said, showed the creativity of the staffers in keeping the seniors connected with the community — “the giveaway with the gifts is a nice idea.”

“The Bishop Ludden education,” he said, “is a special one.” He has always thought that the school “represented what’s best about Christianity and the whole notion of charity.”

Why not some luxury?

And Vergara, whose daughters — Adriana, Alisa, Amanda, and Andrea — also graduated from Ludden, found an alternate form of charity for his beloved people in Colombia: “We provided them with an ice cream day. … To have an ice cream in Colombia is a luxury. Not many kids have it. I grew up, I did not have ice cream until I came to the States. It’s expensive.”

A woman who 10 years ago lived in one of the residences that “Project Smiles” assists now has an ice cream business in Colombia, so Vergara contacted her. In the week before Christmas, she delivered ice cream to 98 people at one residence and to 46 moms and 39 babies at another.

“That’s just the beauty of it,” he said.

He was sad that he couldn’t be there to see it but “happy because of what we see here with the young ladies [such as a 93-year-old] that come by, pick up their lunch, pick up their gift.”

In warm or frozen climes, the guy evokes smiles everywhere.