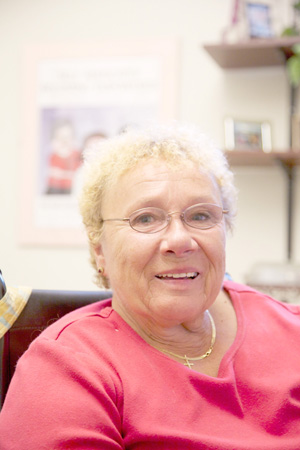 It wasn’t Sally Johnston’s family that kept her from attending Mass when she was little. It wasn’t a lack of faith, a falling out with the priest or even a lazy longing for a few more hours in bed.

It was the stairs.

Johnston, who is in a wheelchair, said there were just too many stairs for her and her family to navigate so that she could join them. Her parents had no choice but to take Johnston’s siblings to Mass and leave her behind.

When it was time for her to make her First Communion, Johnston was undergoing operations at St. Joseph’s Hospital in Syracuse. The nuns there coordinated the sacrament for her.

“I’m grateful because I got the church to get me my First Communion, but it would have been so much nicer to do that with other children,” she said.

She can still remember her father struggling to carry her up a flight of stairs so that she could be in the church for her confirmation.

“Now being able to get into the church really is nice, but we have a long way to go for full inclusion,” Johnston said.

It’s for this reason that Johnston has become involved with the advisory committee for the diocesan office of disability ministry. It’s a small committee, but they have been meeting for over 20 years.

The committee and the office are in the beginning stages of a process of revitalization under the appointment of a new director, Father Charles Vavonese.

“I’m just glad to be a part of the committee. I’m glad that we’re becoming active again and I’m hopeful that we’ll be able to work with the church to bring about real inclusion — for everybody,” Johnston said. “Because let’s not forget that it’s also the elderly who can become disabled and have a harder time getting around.”

“We have a woman in our church who happens to go to the same Mass that I go to at St. Daniel’s. She has a developmental disability … and she participates in the collection. She looks forward to passing the basket, and she goes to the man at the back of the church that organizes it and says, ‘Can I work today?’ And as she’s passing the basket she’s smiling and saying hello to people,” Johnston said. “She’s there every week and she looks forward to being able to do that every week.”

Rachael Perkins has been a committee member since 1989, and this focus on inclusion is important for her as well. “I was interested in the progress that could be made in our community for people with disabilities, and I thought the church was the most sensible place to start,” Perkins said.

One key way that all parishioners can be a part of this inclusion is by welcoming those who have overcome the difficulties that are a part of living with disabilities so that they could be present at the Mass.

“It’s such a simple thing. It’s just a point of going over and saying, ‘Gee, it’s good to see you here,’” she said. But often, she said people are afraid of approaching someone with a disability because they don’t know what to say or what reaction they may get in return.

This, she said, is where pastors and deacons come in. Perkins often introduces pastors to people with disabilities within their parishes, sometimes by bringing the priest to the person’s home to visit for a while. Then, when the priest sees that person at Mass, he can stop and have a quick chat.

“Then another parishioner will see that and say, ‘I like the way we do that in this church. I’m going to go over and say hello myself,’” she said.

Father Vavonese said these kinds of changes in attitude and perception are key to successful inclusion.

“I think we can always advocate for improved access. We’ve come a long way and there’s still a long way to go,” Father Vavonese said. “But I think the biggest barriers to enabling those with disabilities to participate in the full life of the church are not walls and stairs, but attitude.”

He said the committee is in the process of drawing up a number of goals to bring about these changes.

One of these goals is to provide more service to schools and religious education programs so that students with disabilities have the resources they need to succeed. Committee members have offered to consult with teachers to help interpret individualized education programs for students, resources will be available on the office’s link on the diocesan web site and committee members and committee consultants will be available as telephone resources for teachers looking for help.

Connie Armstrong will be taking over as the director of catechesis for the Northern Region of the diocese as well as for catechesis for people with disabilities throughout the diocese. She replaces Sister Germaine Hilston, CSJ, who is retiring from the position (see related story on page 6).

“I certainly want to continue the good work that Sister Germaine has been doing with the certification of catechetical leaders,” Armstrong said. But she said she is also looking forward to implementing some innovative ways of organizing faith formation, particularly for young adults.

While coordinating religious education for people with disabilities will be a new experience for Armstrong, she said she’s already contacted people in the Albany and Rochester Dioceses to get some good ideas.

Father Vavonese said that the committee and office will be looking at ways to serve the increasing number of students with Asperger’s Syndrome and Autism who are going through sacramental preparation classes.

Father Vavonese said the committee will also be reaching out to the parishes for feedback.

“We’re also planning to do a survey where we can find out what the parish folks need and then channel our energies into that,” Father Vavonese said. “If they’ve got articulated needs and we can help to meet those needs, then that’s a real service.”

He said the group is in the process of setting up a number of subcommittees to more fully address the objectives that lie ahead. “It’s an exciting time because we’re able to chart the course,” he said. Anyone interested in becoming a member of one of the committees can contact Father Vavonese for more information at (315) 424-1830.