A mother’s prayer, a child’s future 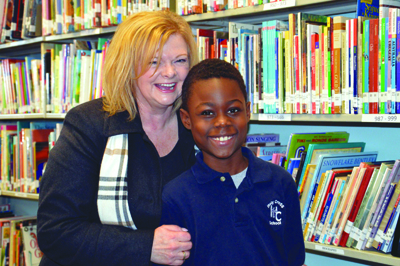 In Haiti, Pelensky Joassin’s father searches for work while his mother sells goat milk to buy food, clothes and medicine for her children. At night the family sleeps packed tightly together on a battered mattress so everyone can fit — everyone except Pelensky, 9, who is thousands of miles away in the U.S., sleeping peacefully in his own bed at the Kreis home in DeWitt.

How Pelensky ended up in DeWitt is a story unto itself. In 2009, Pelensky and his friends were playing on the streets of his native Haiti when he was struck and nearly killed by a truck. Pelensky’s injuries — a crushed pelvis and head trauma —put him in critical condition. The doctors told the Joassin family it was unlikely their son would survive, but Pelensky defied the odds and slowly began to recover. Unable to move, Pelensky lay on a mattress in his family’s one-room home fighting for his life. Without running water or electricity, the family was unable to properly care for their sick child and Pelensky was plagued by serious infections that came from the use of contaminated water to bathe his incisions. As Pelensky’s health rapidly deteriorated, in desperation, Pelensky’s father began looking all over Haiti for someone to help his son. Even the medical clinic closest to the Joassin’s home carried only one antibiotic that wasn’t strong enough to fight the infection coursing through Pelensky’s body.

Walking more than 100 miles for several days while carrying Pelensky, Joassin visited more than 25 health clinics asking for help. No one would offer assistance.

News of the young boy’s health concerns reached Owen Robinson of Boston, Mass., who ran the Haiti Cardiac Alliance, a non-profit organization that worked with medical partners to give life-saving heart operations free of charge to Haitian children in medical need. Robinson used a referral system to prioritize the most critical cases and maintained a network of overseas hospitals in the U.S. and Canada for surgical procedures as well as follow-up care after surgery. Among these hospitals was the Upstate Golisano Children’s Hospital in Syracuse.

Although Pelensky’s injuries were far more extensive than the operations Robinson normally arranged pro-bono with doctors in the U.S., he was moved to help Pelensky.

Robinson contacted Dr. Jonathan Riddell, MD, a Syracuse doctor. Riddell agreed that if Robinson could get Pelensky to Syracuse, he would perform a bladder operation that Pelensky desperately needed. In fact, so touched by Pelensky’s struggle, Riddell even agreed to fly to Haiti if it was impossible to move Pelensky.

With Robinson’s help, Joassin and Pelensky flew to the U.S. where the delicate procedure was performed on the young boy. Within a few weeks, Pelensky had significantly recovered and he and his father returned to Haiti.

Recovering in an area without running water proved to be hazardous for Pelensky. Before long he had once again contracted a massive infection, which began to affect the function of his kidneys.

Doctors warned Pelensky’s parents that, without proper medical treatment, his kidneys would shut down and the young boy would die. Robinson turned again to Riddell for assistance. In September 2013, Pelensky returned to Syracuse for further treatment.

As Pelensky once again began to improve, doctors explained to Joassin if his son returned to his previous living conditions in Haiti he wouldn’t survive more than three months. Joassin realized Pelensky couldn’t return to Haiti.

With Robinson’s help Joassin began searching for a host family for Pelensky. Small ads were placed in Sunday bulletins at local churches, including Holy Cross Church in DeWitt.

Holy Cross parishioner Carrie Kreis knew she wanted to help children. A stage-four cancer survivor and mother to teenagers Nick, 14, and Nancy, 16, Kreis felt since she was declared free of the disease five years ago that it was her turn to give back. “I knew God had wanted me to live to raise my children and help others,” said Kreis.

One night Kreis had a vision of the Blessed Virgin while she slept. In that dream, Kreis saw children of all different nationalities gathered around her. When she woke, Kreis knew whatever she would do to help others would have to do with helping children. As she sat in the church pew that Sunday and read Robinson’s request for a home for Pelensky, Kreis felt spiritually moved to answer the call and offer her help and her home.

“Before calling I first wanted to speak with Nick and Nancy. This wasn’t just my life that would change; it was all of our lives. They looked at me and said, ‘What are you waiting for? Call!’” Kreis picked up the phone and made a call that would not only change her life, but also Pelensky’s as well.

“I spoke to Owen for over an hour,” said Kreis. “We talked all about Pelensky and his medical issues and I knew I wanted to help this child. I knew I was meant to help him.”

Robinson set up several meetings and within a few weeks, the Kreis family began to see Pelensky as “one of the family.” On Nov. 4, Joassin’s father brought Pelensky to live with the Kreis family. The parting was an emotional one.

“Pelensky’s father took my husband’s hand and Pelensky’s hand and with tears in his eyes told us, ‘Yours now,’ and he left to return to Haiti,” said Kreis, her voice filled with emotion. “I don’t know if I could have gone through that as an adult and here this little boy had already faced so much. Our cultures were so very different but Joassin knew he had to leave his son in order for him to live a healthy life.”

The Joassin family tries to communicate once a week with Pelensky, but without electricity, the family must walk five miles and pay someone to plug in a cell phone and purchase minutes for them to talk with their son.

Living together has been a learning process for both the Kreis family and Pelensky.

“Pelensky only spoke a mix of French and Haitian Creole when he came here, and those are languages I don’t speak,” laughed Kreis.  “It was frustrating for all of us at times to communicate, but God, love and prayer can get you through anything.”

Pelensky found living at his new home fascinating. The shower reminded him of rain; there were new foods to like (and to dislike); a brother and sister to watch over him and play with; and Kreis to care for him.

“When I tucked him in at night I always got a big hug and a big smile,” said Kreis. “He thinks of Nick and Nancy as his brother and sister and my children see him as their little brother.”

Pelensky also gets help from his friends at Ronald McDonald House, where he had previously stayed following his recovery. The staff occasionally invites him over for a weekend visit. Robinson, who speaks French and Haitian Creole, often stops by when he is in Syracuse to visit Pelensky and help Kreis navigate through communication issues.

“Sometimes when he comes over I have this long list of things I need for him to explain to Pelensky,” laughed Kreis. “There were things on that list like, ‘We don’t jump on the sofa.’ But lately Pelensky’s English is really taking off and we can understand a lot more of what he is saying.”

The future for Pelensky is still somewhat uncertain. He is in the U.S. on a medical visa and is expected at the end of February to undergo further urinary tract reconstruction, an operation that lasts about five hours.

“He is on our insurance now which is a big relief,” stated Kreis. “But we also have two donors who are helping pay anything that isn’t covered by the insurance company and that is a huge blessing. And so many people have been so generous with donations and gift cards, especially people at Holy Cross Church and School. They just opened up their arms to Pelensky. But the prayers for our family have meant the most to all of us. They not only pray for Pelensky, they pray for all of us.”

One of the family
Pelensky now attends Holy Cross School and in his khaki pants and blue shirt he looks like any other nine-year-old boy, and behaves like one too. “I like basketball and playing in the snow,” said Pelensky with a huge smile when asked what he likes to do best. “I like playing hockey in the gym with my friends and I watch movies.”

Kreis is pleased with the education that Pelensky is getting and the progress he is making socially. “This is the perfect school for him,” said Kreis. “There is so much love here and people really care about him. I couldn’t think of a better, warmer, more inviting place.”

Pelensky gets bored with the interview questions and starts to shift his weight from foot to foot. When asked what he wants to be when he grows up, he grins. “Helping people like Owen or being a doctor,” he says, but then adds with a quick smile, “or an NBA basketball player.” And with that, Pelensky is finished with the interview and starts down the hallway to his classroom.

“Hey!” Kreis calls out. Pelensky immediately stops, concerned that he has forgotten something.

Kreis grins. “I love you,” she calls out and Pelensky grins back. “Love you,” he calls back and disappears around the corner.

Kreis smiled. “He has learned so much in such a short time. He can tell time, he’s reading, he’s making friends — it’s amazing to see how far he has come since November. He’s one of us,” laughed Kreis. “He’s one of the family.”