A pilgrimage to religious (and sports) shrines 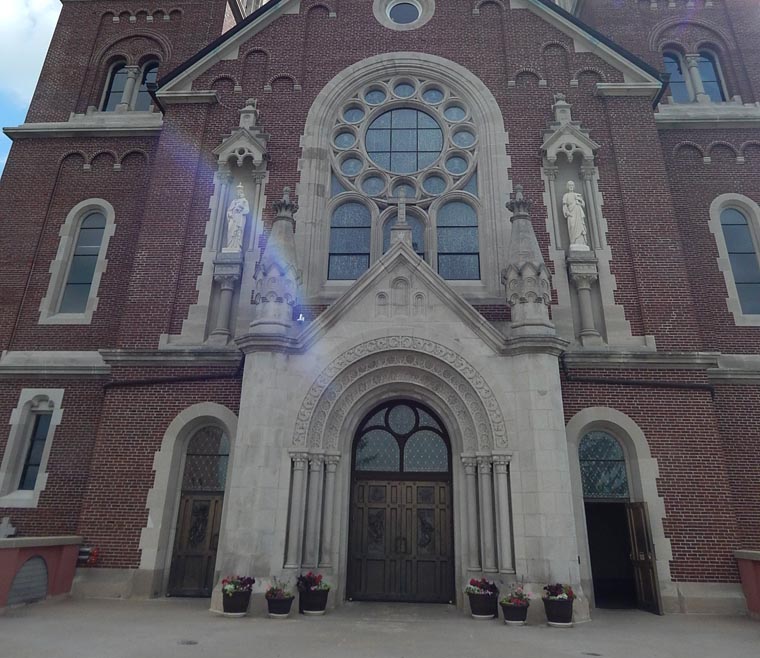 The trip includes stops at churches and Erin Hills, site of the U.S. Open golf championship.

The next time your husband says, “Let’s go to a great sporting event” (in my case, the U.S. Open, Erin Hills, Wis.), say “YES!” and start googling religious shrines in that area. My husband, Chuck, and I just returned from a visit to the glacial state of Wisconsin, which is full of religious and sports shrines.

We flew into Chicago early on Sunday, June 11, and headed north to Green Bay, Wis. On the way, we stopped at the site of the 2020 Ryder Cup, Whistling Straits, loaded with bunkers and rambling hills. Monday began our next great adventure and with weather in mind, we decided to go first to The National Shrine of Our Lady of Good Help northeast of Green Bay.

We were there a little after the grounds opened at 7 a.m. The welcome center and church were both open and we walked and learned about the only Marian Shrine in the United States on the site of an approved apparition of the Blessed Virgin Mary. The Blessed Mother appeared to a young Belgian woman, Adele Brise, and asked her to teach the Catholic faith to the children in the area. The faith was getting weak. Adele began a school and although she never took vows for a particular religious order, she was called Sister Adele and she taught the children for free.

I was surprised by the statue of Mary in the church. She had shoulder-length blond hair, but it made sense as I remembered Our Lady of Guadalupe appearing to St. Juan Diego with native features and dress.

Although surprising to me, her appearance was probably very natural to Belgian-born Adele. I stopped to pray for priests at the votive shrine to St. John Vianney and Chuck and I went downstairs to the chapel. Another statue of Our Lady with Jesus in her arms sits on the site where Our Lady appeared to Adele.

We lit a candle here and prayed for all the intentions we brought for our family, friends, and people we had offered to pray for. The grounds are simple but lovely. The Rosary Path is next to a field with large round bales of hay, reminding us this is farming and dairy country. One of the miracles attributed to the shrine regards the 1871 Great Peshtigo Fire when the chapel grounds and buildings were left virtually untouched by a devastating fire. It was a sanctuary of safety for many people at that time.

We headed to Lambeau Field next after a quiet time of praying, walking, and reflecting at the shrine, and we were totally impressed with the stadium tour and Green Bay Packers Hall of Fame. We even got to go out through the players’ tunnel and shout “Go Pack!” and listen to the echo feed back to us.

Ahead of the coming storm, we headed to La Crosse, Wis., which is situated on the Mississippi River. It took a map to convince Chuck of this geographical fact. We took a couple of nice strolls down by the river’s edge and Tuesday morning went to visit the Shrine of Our Lady of Guadalupe. The Shrine Church is not visible as you pull into the parking lot. You see the welcome center and a votive chapel. A hike up a winding path (or the shuttle) takes you to the church.

We stopped in the votive chapel and admired the stained-glass windows honoring Mary under some of her titles. I lit another candle for all the prayer requests we brought with us. A memorial honoring the unborn sits at the top of the Stations and Rosary Walk. An angel flies with a baby and two young children while a seated Blessed Mother holds three babies in her arms. The Shrine Church is beautiful with side altars honoring St. Maria Goretti, St. Therese, Blessed Miguel Pro, St. Gianna Beretta Molla, St. Faustina, and St. Peregrine.

A reliquary under each altar holds a first-class relic of the saint. At the altar honoring St. Peregrine, I prayed for some special intentions: people with cancer, one woman with a wound on her leg that is not healing.

A beautiful life-size image of Our Lady of Guadalupe sits behind the altar in a silver frame. We were in time for the rosary and Mass and watched as people filed in. As we got closer to Mass time, the confessional got quite busy. It was June 13 and I took advantage of the opportunity to fulfill that part of the Fatima Plenary Indulgence.

At the end of Mass, the priest knelt before a lighted statue of Our Lady of Fatima and we prayed for the pope’s intentions. We walked down the same path past statues of St. Kateri Tekakwitha and the Holy Family. The Holy Family statue showed Joseph teaching woodworking to Jesus. The two pieces of wood he held formed a cross and Mary held her hand to her mouth as she gasped. I had never seen a rendering of the Holy Family like this.

Time to head to Milwaukee and the next stage of our trip, the U.S. Open at Erin Hills. You couldn’t get a hotel anywhere near the golf course so we decided Milwaukee would be a good location. We like to go to golf events on Wednesdays because I can take pictures during the practice rounds. The weather was unsure, however, so we went to our final Wisconsin shrine, the Basilica of the National Shrine of Mary, Help of Christians, at Holy Hill. If you watched the U.S. Open at all, the basilica was very visible.

Holy Hill is a shrine run by the Discalced Carmelite Friars. We attended Mass and prayed the rosary there and almost climbed the 178 steps to the top of one of the towers. As we stopped at a landing, Chuck figured we were on step 160 and I looked straight up. The rest of the way was a narrow spiral staircase with triangular steps and at that point my fear of heights kicked in. But I carried in my heart to that point all those people I had been praying for knowing God would hear those intentions regardless of whether I reached step 160 or 178.

The lower part of the shrine is dedicated to St. Therese, the Little Flower. The Upper Church is beautiful with stained-glass windows depicting the life of the Blessed Virgin Mary. It can seat 1,000 people. Before Mass, we went to the monastery office to speak with the friars’ secretary, Bonnie. The shrine receives 500,000 visitors a year and needs a lot of rosaries. We asked if we could help supply them through the CNY Marian Center rosary makers, started by Alice and Nelson Kirkpatrick who were featured in the Catholic Sun on June 15. Holy Hill gets rosaries from all over and every bit helps. When I told our rosary makers about the quantity the shrine needs and my offer to help provide them, some laughingly suggested they might retire!

After Mass and rosary, we decided not to challenge the weather, but wait to go to the first round of the Open on Thursday. I prayed for a good-weather day for Chuck’s sake because he had been so willing to visit the shrines I wanted to see. Matt Campbell, a native of Rome, N.Y., was among 9,500 golfers who competed for 156 spots in the U.S. Open field. He made the field and played two rounds but missed the cut.

Friday we headed toward Chicago for our return home Saturday morning. We arrived at Wrigleyville, the home of the 2016 World Series champs.

Our hotel was an easy drive north of our last religious stop, the National Shrine Museum of St. Therese. She has long been a dear friend to me and we got there just in time for Mass. It was a Mass of thanksgiving as we were ending our Religious and Sports Shrines Pilgrimage with safe travel and some wonderful memories.

Our flight home was uneventful and I’m sure it was the “Flying Novena” of Memorares that got us from the hotel to our gate in an hour, despite a broken conveyor belt in security and lines backed up to the entrance at O’Hare. Chuck bought tickets today for next year’s U.S. Open at Shinnecock Hills Golf Club in Southampton. I think it’s time to start googling.

Regina Harty is a volunteer for the Central New York Marian Center in North Syracuse. Her husband, Chuck, is the retired executive director of the Professional Golfers’ Association of America Central New York Section.