‘A priest for all of us’ 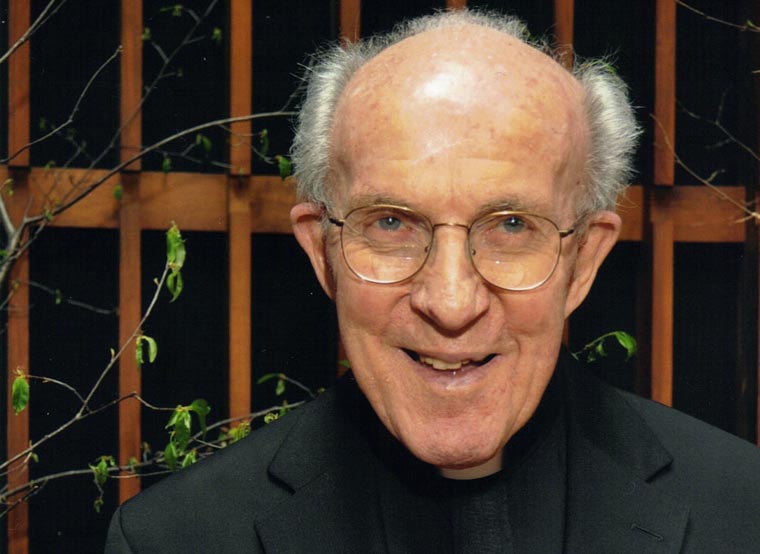 The family always had good hands — holy and workmanlike too.

A gifted pianist, Msgr. James A. McCloskey also pursued golf, basketball, and tennis. Above all pastimes, though, he loved the Mother of God for his 96 years. Knowing this, his brother Charles carved a piece of wood into a 15-inch statue of the Madonna and Child. For Msgr. McCloskey’s funeral Mass Dec. 1, the 1976 carving graced the casket. Instead of a stock photo from an online service, the cover of the funeral program featured a lovely colorized depiction of the statue.

Hundreds of mourners were there to see it and to honor the memory of this humble, joke-loving, and inspirational man at Immaculate Conception Church in Fayetteville. Bishop Robert J. Cunningham, who presided, called Msgr. McCloskey “a priest for all of us.” Among the seven concelebrants were retired Auxiliary Bishop Thomas J. Costello and the homilist, Father Thomas J. Ryan.

“Like every priest, his hands were consecrated with the Oil of Chrism for the sacred duty of priestly ministry,” Father Ryan, the Immaculate Conception pastor, said of Msgr. McCloskey. “Those hands, though consecrated, were never set apart from the people; rather they were well worn, never afraid to be immersed into the shepherd’s ministry.

The Mass program noted that Msgr. McCloskey was born on April 11, 1921, in Syracuse and died Nov. 25 at Francis House, a Syracuse residence for people with terminal illnesses. This year, the monsignor who preached love and mercy celebrated 71 years as a priest in the Diocese of Syracuse, where he guided many parishes and held many other leadership roles.

Frailty pushed the monsignor into retirement in 1995. He became the senior priest in residence at Immaculate Conception for a restorative 22 years — a testament to the “wonderful people of this parish [who] uplifted him physically and spiritually” and inspired him to carry on a very effective ministry to young and old alike, Father Ryan said. “Near the casket,” Father Ryan said, “you will note a recent picture of a young child’s hand on top of Monsignor’s frail, elderly hand grasping a cane — the wisdom of years guiding the innocence of youth.”

Msgr. McCloskey offered the Holy Eucharist daily, Father Ryan said, and during those 71 years the monsignor also “poured the water of Baptism over so many babies; compassionately held the hands of the sick and anointed the dying; blessed the loving marriage covenant of young couples; healed countless fractured lives through Reconciliation; carefully guided young people in this journey of life; and taught the faith from many pulpits.”

‘His Mass and his people’

This was Msgr. McCloskey’s routine, Father Ryan said: “He would rise for morning prayer and Mass; but prior to Mass, he would stop in church and pause at the 12th Station of the Cross, the Crucifixion, then proceed to reverence the Tabernacle and finally go to the statue of the Infant of Prague for a moment of prayer.”

The 9 a.m. Mass was “his Mass and his people!” Father Ryan said.

In the afternoon the monsignor would often have lunch with his friend Daniel Brown. Then he would visit Immaculate Conception School, walk the campus praying the rosary, and visit neighbors. Then, Father Ryan said, came “a long dinner that often engaged us in theological or pastoral issues — and you knew it was going to be a long, drawn-out affair as he regularly finished one conversation and began another saying ‘Anyway …!’”

Father Ryan noted the devoted care given to the monsignor by parishioners, friends, Dr. Vic Croglio, and nieces and nephews. “Monsignor had a deep love for his family,” Father Ryan said.

The monsignor’s nephew and godson, Charles C. McCloskey III, delivered the Words of Remembrance at the Mass. He said his uncle grew up in Syracuse and worked at the A&P grocery store for free so that he could learn the job. “When he started getting paid,” Charles said, “he said his average wage worked out to four and a half cents per hour. He also sold magazines and mowed lawns” because times were not easy.

He went to Cathedral High School, and Msgr. Martin J. Watley told him: “‘You’d be a dummy if you don’t go to seminary.’” He was ordained in 1946.
Charles quoted a 12-year-old Immaculate Conception School student saying about Msgr. McCloskey: “‘He always compliments someone for no reason; he just does it to be nice.’”

“I close simply,” Charles said, “in the way that Father Jim would always close: ‘Peace.’”

At the reception after the funeral, Msgr. McCloskey’s nephew James Murphy, of Camillus, said the wood carving of the Madonna and Child always hung in a prominent place in all of the monsignor’s different residences over the years.

“And he was specific in his instructions to me for his funeral arrangements … that a) it be there, b) it be on his casket, and c) that there would be an acknowledgement that his brother carved it.”

The monsignor’s favorite song on the piano, Murphy said, was Liebesträume by Franz Liszt, “and he knew it by heart, and when he played it, it was beautiful.” One of the classic family photos shows James playing piano with his uncle. “It kind of runs in the family,” he said.

His uncle always like to hug members of his family, Murphy said. “He was my mentor since high school days,” he added. “I went in the seminary for a while; he was my mentor when I came out and went to college; he helped me get into college. I got into business, and he was always there when I had questions about this, that, or the other thing. And he was my confidante and mentor all my life.”

A master joke teller, he also was “such a voice of reason and hope,” she said.

Members of Msgr. McCloskey’s family have versions of the wood carving in their homes. At the reception, Rosemary and her brother James also displayed the monsignor’s white stole, which he owned for more than 30 years. Stitched into the back of it are the names of family members. Stitched into the front are a blue and gold version of the Madonna and Child carving, and a favorite saying of the monsignor’s: “May Mary keep you always in God’s love.”

Three weeks before he died, Msgr. McCloskey got a visit from Bishop Cunningham. The monsignor told the bishop he grew up in the Cathedral Parish and even served as a torchbearer for Bishop Daniel J. Curley.

The bishop recalls the monsignor saying, “‘You know, we always sat in the fourth pew on what they called the Gospel side in those days, so I hope that you will, whenever you pass that fourth pew, perhaps you could say a prayer for me and my family.’
“And I thought that was a beautiful memory, and a beautiful tribute to this man’s deep faith.”

After the funeral Mass, Bishop Cunningham said, some of the young priests were going to spend the afternoon in prayer for vocations to the priesthood. “We’re going to ask Msgr. McCloskey’s intercession as we do this,” the bishop said. “And we’re going to ask you to continue to pray that God will send … others to follow in his footsteps.

“There will never be another one exactly like Msgr. McCloskey. But he gives us a wonderful example to follow, and to strive for, and to try and imitate.”

The monsignor’s niece Murphy Barry will remember those caring, consecrated hands hugging her, “but I also just remember, especially in the last days when I visited him at Francis House, how he still had a good grip.

“And he would grab your hand and hold it. And it just meant so much to feel that strength still in him.”