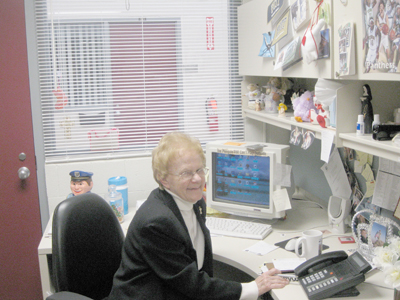 Sister Maura Rhode, CSJ, likes to joke that her vocation has brought her a life sentence.

This month marks her 21st year serving as a Catholic chaplain at the Jamesville Correctional Facility.

Sister Maura was the first female chaplain at the facility. With her small frame and her propensity to hug people and laugh, she seems somewhat out of place in a building with barbed wire fences and bullet-proof glass. She said another chaplain told her he saw her on the first day and thought to himself, “They’ll eat her alive.”

But as she makes her way to her office, stopping to chat with inmates and guards and children in the waiting room, it’s apparent that this is just where she belongs.

This perfect fit came as a surprise even to Sister Maura. “I never in God’s world would have thought about coming to jail to work,” she said.

In fact, there was a time when she never would have believed she’d become a nun.

“When I was in eighth grade I wasn’t having any of that nun stuff. I wanted to go out and have 10 kids. But God is bigger and stronger than me,” she said.

When asked about how she discerned her calling, she smiled and shrugged. “God kept bugging me about it,” she said.

Sister Maura professed her final vows in 1958. She earned a bachelor’s degree in chemistry from the College of St. Rose, a master’s degree in chemistry from Syracuse University, certification in administration and supervision from Fordham University, and took bioethics courses at Georgetown University. From 1960 to 1986 she taught courses or served as principal in schools in Syracuse, Cohoes, Rome and taught chemistry at Maria Regina College and Onondaga Community College.

She said she was particularly affected by her time teaching at St. Lucy’s in Syracuse from 1964-75. “I kind of found myself at that time,” she said. “I realized it’s all about loving and accepting people the way they are.”

This is the message she brings to her ministry at Jamesville.

Her tiny office is one of the first rooms through the electric doors into the prison. “We see every inmate that comes in, usually within the first day they come in,” she said. The room is filled with toys and posters, pictures and statues.

“The inmates come in and say, ‘Is this the gift shop?’” Sister Maura said, laughing.

But each of the things in her office has a story, each is a memento of someone out in the world whose way was made a little easier because of Sister Maura. Some of the mementoes are silly, like a boxing nun doll or a dancing Hank Williams Jr. statue, and some reflect the time and attention Sister Maura has given. She has a couple of soap statues that are surprisingly intricate and an ornately crafted photo frame sits on her desk that was made from folded and braided foil potato chip bags. She held up a new card that was mailed from an inmate the same day she was released.

“When you show appreciation or love or respect to someone, they return it,” Sister Maura said.

But she said the ministry does, of course, bring with it some difficult moments and upsetting stories.

“You try your best, and sometimes it’s very wearying. But most of the time you keep going because you never know what little word or touch is going to make a difference in their life. One of these times might be the time,” she said.

Being able to talk and laugh with the other chaplains makes it easier, too, she said. And she is able to cut back some on her hours now that Deacon Fred Cholette has come in to help her.

She said she spends much of her day speaking with inmates who would like someone to talk to. “When you come to jail there’s an awful lot of time to yourself, and I say, ‘Sometimes God has to hit us on the head to get us to stop and take a look at ourselves.’“

Inmates are free to see the chaplains any time, Sister Maura said, and they come to her with bad news, good news, or to talk about the need to change their life. “They’re extremely respectful of chaplains because they know we respect them,” she said.

“We are also very much here for the officers,” Sister Maura said. “They have a very, very tough job.”

Sister Maura gives out Bibles, rosaries and prayer books. But she also helps with more practical and immediate needs.

One of the things Sister Maura does for inmates is to provide them with clothes for their release date. If, for instance, an inmate is brought in during July and released in December, they might have only the clothes they came in with, and not something that would keep them warm.

She also helps released inmates find positions at Altamont, a recovery program that offers housing and training. “When they choose to go on their own it’s a wonderful thing,” she said.

Sister Maura said she’s never come across an inmate she felt she’d never be able to reach. “I’ve always been filled with hope. God’s love is greater than all those obstacles,” she said. “I keep saying, ‘God doesn’t make junk.’”

Sister Maura said she loves her ministry and couldn’t imagine not coming to Jamesville to work.