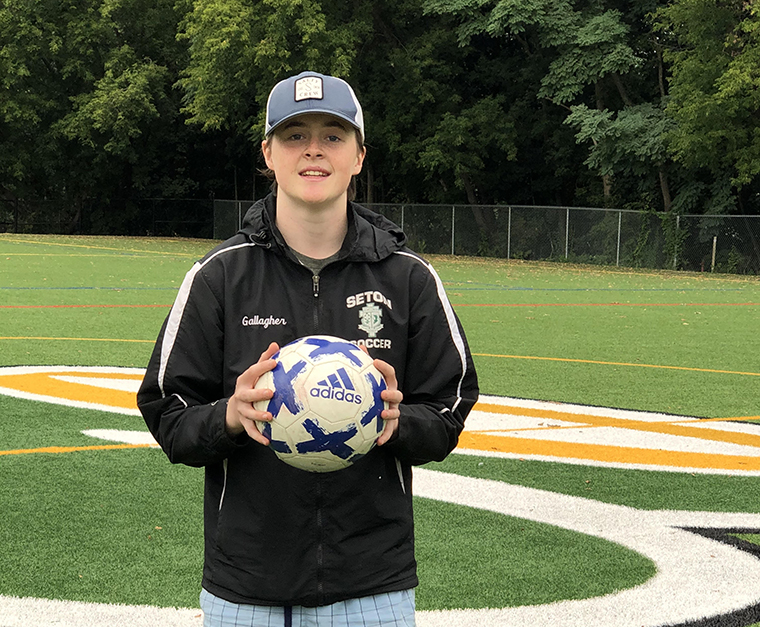 “They were just trying to find a place to play,” he recalled. “They were being kids. So unfortunately that’s the adult’s responsibility now to try to keep ’em safe, right?” He had to reject their request because CBA’s facilities were still closed due to the coronavirus pandemic.

The NYSPHSAA document appears to offer hope for student-athletes such as Seton Catholic Central High School senior soccer player Red Gallagher, who said in an email to the Sun:

“With everything going on in the world, it is still really hard to even imagine the possibility of going without a soccer season. That being said, the way that I have been dealing with these tentative plans for fall sports is taking it one step at a time.

“As of now our season is starting September 21st, so I have been working as if there were no reason to believe soccer wasn’t starting in a few weeks. Our team is ready and very anxious to start our season and we are just hoping for the best. If these plans change, then my teammates and I will continue to work hard for whenever our season ends up being.”

“The athletes are jumping out of their skin,” said Dr. Elizabeth Carter, President of Catholic Schools of Broome County. “They are really antsy to get going. … They’ve been locked up all this time, [since March], and they’ve got a lot of energy; they need to be able to expend their energy.”

Last month, Gov. Andrew M. Cuomo’s website announced that schools must follow the Department of Health’s guidance for school sports: “Schools will have to limit capacity of indoor facilities to no more than 50 percent occupancy and limit spectators to no more than two spectators per player, in addition to implementing social distancing and face coverings.”

The NYSPHSAA called its Sept. 4 document a “recommended resource” for high school sports: “Participation in interscholastic athletics is certainly voluntary for both the individuals and the schools. … School district superintendents and boards of education have the authority and autonomy to administer their district’s athletic programs as they deem appropriate. …

“The ability to participate in sports and recreation activities is determined by a combination of the risk for COVID-19 transmission (1) inherent in the sport or recreation activity and (2) associated with the ‘type of play’ (e.g. individual practice vs. game).

“Sports and recreation activities are categorized by NYSDOH as ‘low’ risk, ‘moderate’ risk, and ‘high’ risk.”

Examples of those two categories are tennis, soccer, cross country, field hockey, and swimming. Those sports may practice and play effective Sept. 21. However, travel is prohibited outside of the school’s region or contiguous regions or counties until Oct. 19.

Higher-risk sports (football, wrestling, rugby, hockey, and volleyball) make it difficult to maintain physical distance. They may practice effective Sept. 21 but not play until authorized at a later date, but no later than Dec. 31.

“I think that document … is a great roadmap for school districts to review and apply that to the document that they have from the Department of Health,” said Section III Athletics Executive Director John Rathbun. “It will help them make a determination on providing after-school activities for our students for this fall.” Rathbun planned to review the document with his Executive Committee and then issue public comments regarding Section III’s 106 schools.

“As of right now 10 of the [state’s] 11 sections are planning on playing fall sports,” wrote Chris Watson, Director of Communications for the NYSPHSAA, in an email. “The only one that has opted out is Section 8 on Long Island. They will delay until 2021 and implement the condensed-seasons model.”

Shortly before the recommendations were announced, Seton Catholic Athletic Director Chris Sinicki said in comments relayed by Dr. Carter that the Seton Saints had been approved for boys golf, girls tennis, boys and girls soccer, and boys and girls cross country. The Saints do not have a football team.

“We’re going to provide a safe environment for the students,” Sinicki said, “and we’ll do everything we can. … We’ll adhere to the Department of Health and the New York State Public High School Athletic Association guidelines.”

The student-athletes, he said, “really want to get out on the fields and play and compete, not only with their own school peers but with interscholastic teams; they really want things to get back to normal.”

“I think we all understand that the athletes — this is their time to play,” Dr. Carter said, “and we want them to have that, but we have to put safety first.”

CBA is on a hybrid schedule, with half the school coming in one day, the other half the next. There are special schedules for seventh-graders and transfer students.

“Our administration has done a great job of formulating this return-to-school plan,” AD Wleklinski said. The CBA Brothers were planning to offer boys and girls cross country, boys golf, girls tennis, girls swimming, and boys and girls soccer. The Brothers’ football team is allowed to practice. “Certainly it’s not going to look the same as it did last fall,” the AD said of CBA’s sports programs.

He said, “The kids are ready. I think the coaches miss their student-athletes; there’s a great bond always between coaches and players. … It’s great to get back to ’em.”

The CBA basketball teams were having a great run last season. CBA’s girls defeated Jamesville-DeWitt to win the Section III Class A title and then had a bye in the state subregionals; they were supposed to play Averill Park on March 14 in the regional but the pandemic ended the season right there.

Just as the CBA girls did, the CBA boys won the Section III Class A title by beating J-D. “The best night of my life,” CBA senior forward Chris Catalano called it. Witnessing it was a huge crowd at Onondaga Community College. Then, on March 11, the CBA boys defeated Franklin Academy, of Malone, in a state subregional game at Cicero-North Syracuse. But the regional game against Mekeel Christian Academy of Scotia never happened.

Coach Wleklinski remembered: “I’ve got to tell our kids that instead of having a chance to win a state championship, we’re done. It’s not safe for us to do it. And the kids after the next day, when they came in, they were talking about, Can we play fall sports? So kids’ll be resilient.”

“I think for the most part out student-athletes have been pretty good,” wrote Bishop Ludden Jr./Sr. High School Athletic Director Gallagher Driscoll in an email. “As good as they can be given the circumstances. We all need to understand the first priority is to get students back in school be it in-person or hybrid learning.

“I am encouraging our students and coaches to approach the fall like any other fall. We plan to compete. Get in great shape/Be ready to be great teammates!

“I think our coaches here have done a wonderful job of keeping our student-athletes engaged through Zoom sessions, etc. This is a difficult situation for everyone. Kids want to compete, coaches want to coach, parents and families want to cheer and support. Every student should be afforded the right to play. We also need to take into account how serious this virus is; I have all the utmost confidence that the people who are making these decisions to play or not to play will get this right. This is not an easy decision. As I have said before, safety and personal welfare are our number one concern at Bishop Ludden.”

Ludden was looking to compete in football, boys and girls soccer, volleyball, and cross country.

The NYSPHSAA’s recommendations for all student-athletes include no hugging, high fives, shaking hands, or fist bumps. Coaches are advised to set clear expectations for student-athletes from day one and to communicate guidelines clearly and consistently to students and parents. Spectators must wear face coverings when they are in common areas and situations in which six feet of distancing is not able to be maintained.

“It’s not as easy as take their temperature and then send them out on the field,” CBA AD Wleklinski said of the student-athletes. “There’s a lot more going on. … Keep ’em safe and they go out and play and then they go home. …