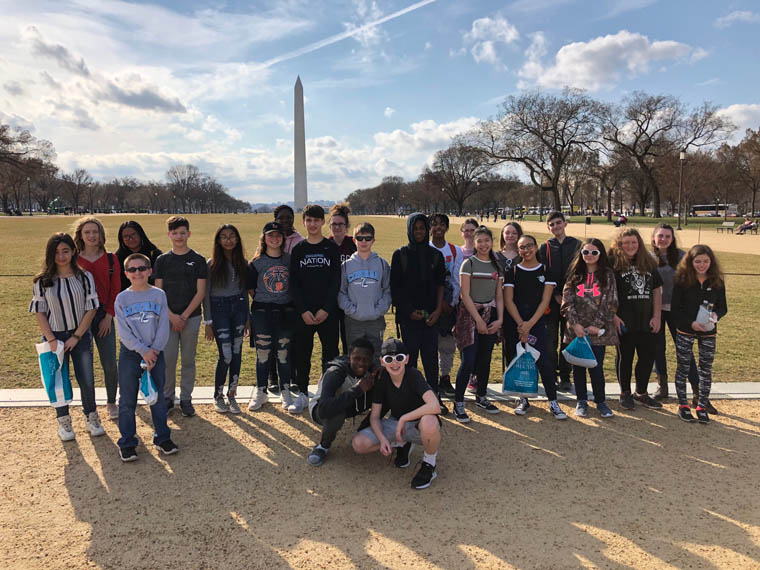 The seventh- and eighth-grade students of Bishop Grimes Jr./Sr. High School (pictured above) went on a trip they’ll never forget: On March 14th, the students traveled to Washington, D.C., to learn about American history while visiting the vibrant landmarks and monuments.

The trip began at Mount Vernon, the plantation of George Washington, the first president of the United States, and his wife, Martha. The estate is situated on the banks of the Potomac River in Fairfax County, Virginia, near Alexandria, across from Prince George’s County, Maryland.

As the nation’s capital, Washington, D.C., is the political heart of America, housing instantly recognizable government buildings and monuments. The students visited The National Mall which houses museums of the Smithsonian Institution, including the National Air and Space Museum, which features huge planes and flight simulators, the National Museum of Natural History, where dinosaurs and mammals are on display, and the National Museum of American History, which features the most American artifact of all: the Star-Spangled Banner Flag that flew above Fort McHenry in Baltimore during the War of 1812. After touring the museums, the students visited the Martin Luther King, Jr. Memorial, the Jefferson Memorial, the Franklin Delano Roosevelt Memorial, the World War II Memorial, the Korean War Veterans Memorial, the Vietnam Veterans Memorial, and the Lincoln Memorial.

The United States Capitol is a monument, a working office building, and one of the most recognizable symbols of representative democracy in the world. The students had a guided tour which began in the Capitol Rotunda, where their guide pointed out the center point of the District of Columbia, as well as the Capitol Dome which is encircled by murals. In addition, the students were able to view the fresco on the eye of the ceiling called The Apotheosis of Washington, showing President Washington rising to the heavens in glory with Liberty and Victory/Fame beside him. Other stops on the 45-minute walking tour included the Crypt, National Statuary Hall, and connecting corridors of the U.S. Capitol, where the students saw statues representing every state.

On the last day of the trip, the students attended Mass at The Basilica of the National Shrine of the Immaculate Conception. The Basilica is the largest Roman Catholic Church in the United States and North America, and is one of the ten largest churches in the world. After touring the Basilica, the students got back on the bus and traveled to their final destination, Arlington National Cemetery. There the students paid their respects at the President John F. Kennedy Gravesite, General John J. Pershing Gravesite, and the Tomb of the Unknown Soldier.