Bishop Lucia: Thoughts on Catholic education in the Syracuse Diocese 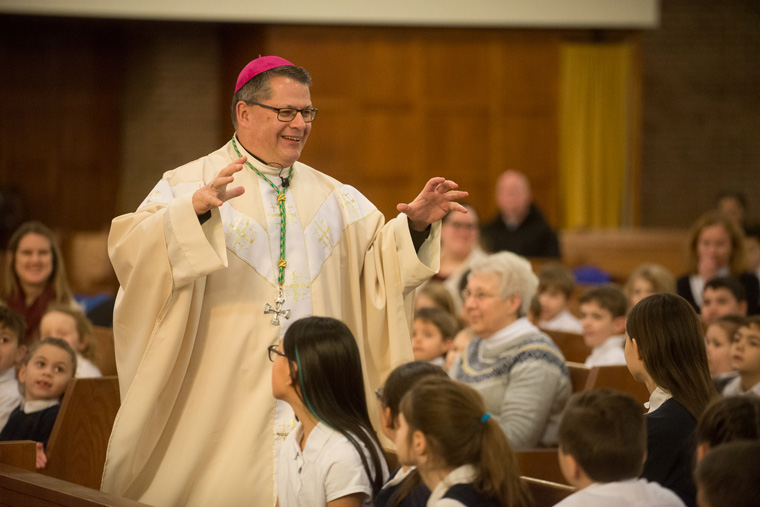 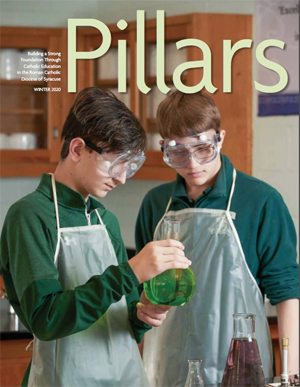 This article was first published in the Winter 2020 issue of Pillars, a publication of the Catholic Schools Office of the Diocese of Syracuse. Pick up your copy of Pillars at your local Catholic school or parish, or visit www.syracusediocese.org/schools/pillars-magazine-2/.

Bishop Douglas J. Lucia grew up in Altona, in the Diocese of Ogdensburg in northern New York. The small town — population 2,887 — had no Catholic schools, so Lucia went to public school.

“We would literally walk every Tuesday from the school to the parish center for religious instruction,” he said. “Church was just part of our day. I was an altar server. I was always getting out of school to serve funerals.”

While ministering in the Ogdensburg Diocese, he taught junior high religion for three years. As pastor of St. Mary’s in Canton, N.Y., he worked with the staff of the parish elementary school. Now, as the recently appointed bishop of the Syracuse Roman Catholic Diocese, Bishop Lucia oversees 22 Catholic schools in seven counties.

A month into his first academic year as bishop, he shared his thoughts on Catholic schools. Here are excerpts of that interview, condensed and edited for clarity.

What is your sense of the health of the Catholic school system in the Syracuse Diocese?

I’m impressed with the number of Catholic schools in the diocese. I was the pastor of a parish with a Catholic school for almost 10 years at St. Mary’s in Canton, so I know the struggle. There’s always a balancing act between tuition costs and needs of the student population. One of the big challenges that’s common to the Northeast is the declining population. As the demographics change, we’re trying to come up with new and innovative ways to keep our schools healthy.

At its high point, the diocese ran 96 schools. Now there are 22. Is it just the population decline?

Families are smaller. It’s also the place of religion in society today. When I grew up, church was just part of the fabric of our lives. There was no question: You went to Sunday Mass. You went to religious education. Today there’s a greater challenge. There are many things that can distract us, and religion can be put on the back burner.

Catholic schools were started in this country, in part, to counter anti-Catholic attitudes and support Catholic families. Is the purpose the same today?

Mother Frances Cabrini came as an Italian immigrant, but her whole purpose was again founding schools and orphanages to take care of the immigrants of the day. I think that in particular where we find the origin of our Catholic school system really is in trying to serve the needs of society.

How do you teach that message while respecting religious differences of students who are not Catholic?

When they come to a Catholic school, they will learn about the Catholic faith. But there’s always a respect about their own practice. They will always be encouraged to be, in their own traditions, men and women of prayer. One of the great missions is to teach respect for one another, respect for authority, respect for creation.

How should Catholic schools address this moment of extreme partisanship in Washington and throughout society?

I think we have to talk to students about what it really means to respect one another and what it really means when we talk about the Golden Rule: Love God and love your neighbor as yourself. How do we live out that rule, which is common to many faith traditions? What does that look like? 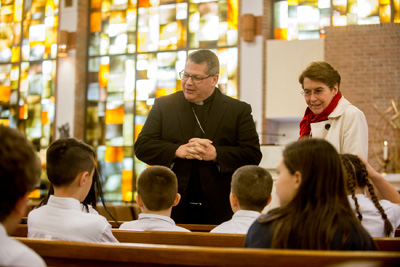 What do you say to a parent who wants something that Catholic schools can’t provide?

Part of the mission of Catholic schools is integrity, and they have to remain true to who they are. True to who we are is not necessarily keeping up with the Joneses and having everything just given to us and that life is not a competition. But I think we offer them something that is not necessarily found in the public sector, and that is faith-based education. In a Catholic school, God is part of the picture.

People frequently point to the discipline that Catholic schools traditionally offer. What do you say to a parent with a child who’s not fitting in at public school?

Our Catholic schools can offer an opportunity for such children to know that they are loved and welcomed. The Catholic school has an advantage in that they might be able to offer a child a different way of learning and more individual attention.

Do you see a time when we might not have any Catholic schools here?

Even as we face lower numbers of students, we want to be able to provide the option for Catholic education, and I don’t see us changing in that mission. What shape will it take? That’s where creativity is needed.

There’s a question of what critical mass is needed. It is not just a financial consideration; it’s also a social consideration. It can’t be so small that [students] don’t experience what it means to encounter and stand side-by-side with others.

The church needs to maximize its mission, and in maximizing mission, sometimes it will be the question of “Well, do we need all these buildings for the mission? What can better serve the mission for me?” Will there be fewer schools? I would suspect yes, but, at the same time, will those schools then be part of a bigger mission? Yes.

Last year after the Parkland mass shooting, there were very big student walkouts across the country. Many students walked out recently after Greta Thunberg spoke at the United Nations about climate change. What is the role of Catholic school students in these civic conversations?

I really want our Catholic school students to give witness to the issues of the day. I want them to have the background they need in order to make informed choices. We also want to respect the wisdom of our elders. There might come a point where we have to say very vocally, very loudly, “Is this really what you want to teach us?”

Scripture says, “And a little child shall lead them.” And there’s the book “All I Really Need To Know I Learned in Kindergarten.” I think we forget those lessons. Our young people help us to remember some important lessons.

Renée K. Gadoua is a freelance writer and editor and a frequent contributor to The Catholic Sun. Follow her on Twitter @ReneeKGadoua.