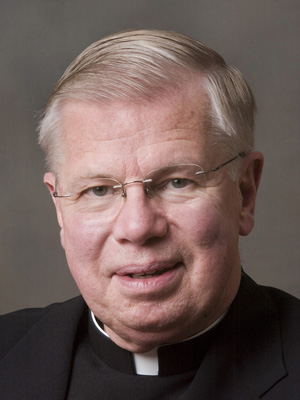 It started with a cough and fever in late March. “I wasn’t feeling well. I felt very lethargic,” said Msgr. J. Robert Yeazel, retired pastor of Holy Cross Church in DeWitt and a priest of the Diocese of Syracuse for more than 50 years.

His doctor examined him, then, suspecting the priest was sick with COVID-19, called an ambulance. “It happened so quickly that I didn’t get a chance to do anything,” Msgr. Yeazel, 78, recalled. “That was it. I don’t remember much of anything from the first five weeks.”

At Syracuse’s Crouse Hospital, Msgr. Yeazel was put on a ventilator. He had a feeding tube in his stomach. He was then put in a drug-induced coma.

After seven months of treatment and rehabilitation at three health care facilities, Msgr. Yeazel returned Oct. 8 to his apartment at The Nottingham in Jamesville. He continues occupational and physical therapy as, step by step and breath by breath, he regains strength.

More than 12 million cases of COVID-19 have been reported in the United States since January. The respiratory illness caused by the novel coronavirus has killed more than 250,000 people in the country and about 525 in the seven counties of the Syracuse Diocese as of Nov. 24. Of the more than 9,000 confirmed COVID-19 cases in Onondaga County, nearly 7,000 have recovered, according to county statistics.

Msgr. Yeazel is the highest-profile Central New York clergy member who has disclosed a COVID-19 diagnosis and is one of five diocesan priests known to have been diagnosed with the disease.

Father Richard Dellos, 77, pastor of St. Joseph-St. Patrick Church in Utica since 2002, died Aug. 11 from COVID-19-related complications. The other three — two retired and one active — have recovered, according to the diocese.

A native of St. Daniel Parish in Syracuse, Msgr. Yeazel was ordained in 1967 and retired in 2017. He ministered at parishes including St. Patrick Church in Binghamton, the Cathedral of the Immaculate Conception in Fayetteville, and Holy Cross Church. He also served as vice chancellor and secretary to Bishop David Cunningham (1900-1979), chancellor of the diocese, vicar general, regional vicar of the diocese’s Western Region, and vicar for priests.

In a telephone interview last week with The Catholic Sun, Msgr. Yeazel described — with labored breathing and a voice still scratchy from the tracheotomy — his experience with COVID-19, gratitude for health care workers, and lessons from the pandemic.

Experiencing COVID-19 was traumatic, he said. “You get hallucinations, so you dream things that aren’t there and they’re not those things,” he said. “I had some really difficult times with that. I thought they were real.”

He hallucinated that he went to a wake, but when he awoke the casket was gone. He also hallucinated attending a party and going to a bar.

“I guess I was lucid enough to realize that in every scene, no matter how crazy they were, it was the same window, the same clock. It was in my room. So I came to the conclusion I never left,” he said.

Msgr. Yeazel described himself as healthy before COVID-19. “Because I was in bed so long, you have to learn to strengthen your muscles again and how to breathe,” he said. “There’s a limited breathing ability. You can’t just go do things.”

He gave an unequivocal warning about COVID-19: “You never want to go through this,” he said. “Whatever you need to do, wear a mask, avoid people, please do it. Because if you go through this, the rest of your life could be scarred by it.”

Missing holiday meals and celebrations will be difficult, but the sacrifice is crucial. “We love our families, parents, brothers, sisters, nieces, and nephews,” he said. “We want to do everything we can to protect them. How would you like it if your mother can trace it from you? If she died? You know, it’s gotta be really concrete because that’s the whole story.”

He acknowledged the challenges of COVID-19 restrictions, but urged people to slow down, treasure their families, and reach out to others. “Before COVID we were always busy,” he said. “We can’t use that as an excuse now.”

He was unconscious when Bishop Lucia visited and two times when a priest anointed him.

“They told my brother twice they’re not sure I’m going to make it,” Msgr. Yeazel said. “Well, I woke up and then I stayed in the hospital for two weeks.” He tested negative for COVID-19 in early May.

He was transferred to Sunnyview Rehabilitation Hospital in Schenectady and later recovered at Fahey Rehabilitation Center in Syracuse. “The care that came from their heart was amazing,” he said.

Msgr. Yeazel recalls a “terrifying” evening in Schenectady. “I wasn’t sure I was going to live,” he said. “One nurse came in and sat down on the side of the bed and just held my hand and said, ‘You’re going to be OK.’ And that made all the difference in the world.

The nurse’s kindness “made me realize just how much that kind of thing means,” he said. “It’s not just anointing somebody or bringing them Communion. It’s really sitting with them and listening to them and taking the time. To hear them say, ‘I’m afraid’ or whatever.

“For me it was a lesson, a renewal in how to do it,” he continued. “It’s so important to just be a good listener and just be there when people feel alone. They feel afraid. If I can do ministry in the future, that’s the lesson I’m going to carry with me all the time.”

He has received more than 2,000 cards and letters wishing him well. “The first month I was getting 50 to 65 a day,” he said. “I did the first thousand with the letter opener and I couldn’t do it anymore. I had to get a battery-powered one.”

Many notes came from people he knows and some he doesn’t. “The messages say, ‘Even when you don’t know, we’re praying for you’ and, ‘We’ll always be here for you, anything you need,’ that kind of thing,” he said. “It was a marvelous outpouring. It was a real boost to me.”

By mid-May Msgr. Yeazel was strong enough to sit in a chair and watch a May 13 livestreamed Mass at Holy Family Church in Fairmount. More than 1,000 people watched the service calling for prayers for his recovery.

At one point he thought he would not survive and wrote a letter to his younger brother, Richard Yeazel, sister in law Fran, and four nephews. “I told them that I was not afraid at all. I was not afraid at all. If I died, I died. I didn’t, I didn’t,” he said. “But the important thing was that if I survived, I was asking the Lord: ‘What do you need me to do?’ And that’s still a question I have. I’m not quite sure yet.”

He’d love to resume assisting at Holy Family, but “I’m not sure I can because of my limited lung capacity,” he said. “What I’d like to be able to do is get to a point where I could do some more spiritual direction.”

His holiday message? “Just remember that the Lord loves you very much,” he said. “There’s nothing impossible. So let’s progress in faith and good health. Let’s stick together to learn something from this.”