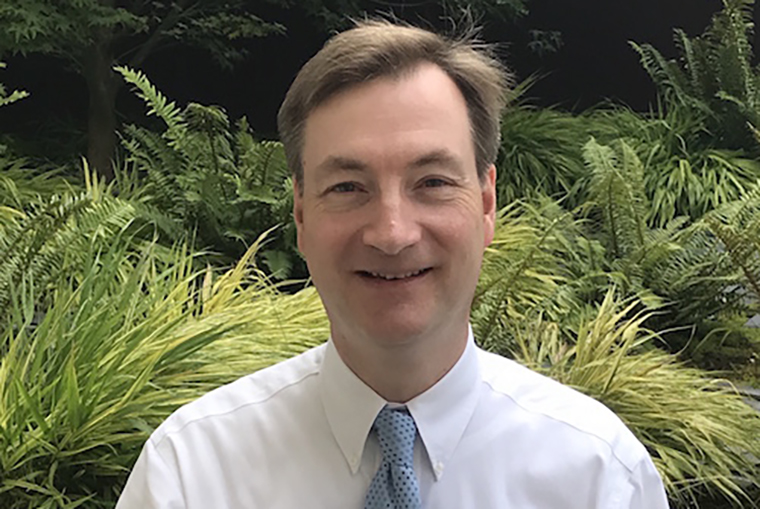 Brian DuSell is a seasoned organist, choir leader and liturgist who comes from Central New York. His education and career path have taken him to the Midwest and the West Coast. This spring he returns to join the Cathedral of the Immaculate Conception in Downtown Syracuse as its Director of Music and Organist. In addition, he will serve as the Diocesan Coordinator of Sacred Music.

At the Cathedral, he will work under Rector Msgr. Neal Quartier to develop, maintain and execute a liturgical music program for the parish with the goal of fostering greater participation in the liturgy. In his second capacity, he will be charged with those same goals for diocesan liturgies at the Cathedral while serving as an in-house resource for parishes in the diocese.

DuSell claims it was “divine intervention” that brought him to the Cathedral. He and his wife Teresa, a church musician in her own right, had made the difficult decision to leave their positions on the West Coast to help family in the East. Brian came back to help his father at the family farm in Erieville in Madison County. Teresa was feeling the tug from Michigan for a similar need. We basically decided to “put it in God’s hands,” he said.

For Brian, that “leap of faith” has been rewarded. Indeed, within a week of coming back he was called by Father Jason Hage to help with music at St. Bernard’s in Waterville. Even more unexpected was the recent call he received from his friend Tom Andino at Le Moyne College who told him “there was this opening at the Cathedral.”

“Brian is a perfect fit for the Cathedral,” said Msgr. Quartier. “Our parishioners often cite the wonderful music and how important it is to their worship experience. I’m confident Brian will sustain that excellence.”

DuSell takes over from Alan Lynch who left the Cathedral for another position.

DuSell fondly remembers when the Cathedral organ was first restored in 1980 while he was in high school. The concerts that followed the dedication were some of the formative events that inspired Brian to become an organist. “I remember meeting Duane Sutton at that time and in the years following. He was most gracious in showing me the Roosevelt Organ. The Diocese of Syracuse is particularly blessed to have such a beautiful Cathedral with an equally beautiful instrument.”

DuSell, comes to the Cathedral after five years (2017-2022) at the Jesuit order’s University of San Francisco, where he was the Associate Director of Liturgy, Music and InterFaith Programs. As such he coordinated a full spectrum of USF student liturgies, interfaith awareness events and the choir in addition to being the University organist.

His parish experience includes 24 years (1993-2017) at St. Ignatius Catholic Church in Chicago. There, Brian directed three separate choirs: the Parish Choir, the Coro Hispano and Coro de Ninos children’s choir. Through a collaborative effort involving professional organ builders, parish volunteers and Brian’s own considerable work, the parish was able to restore its four-manual, 34-rank Kilgen pipe organ from 1925 as well as to repair the parish’s 25-note Deagan Tower Chimes. His time in Chicago overlapped with serving as Director and Instructor of music at St. Joseph College Seminary at Loyola University. There, he directed the seminary choir and gave individual instruction in voice and piano.

Throughout his musical ministry career, Brian has also found time to share his expertise as organ consultant for new, rebuilt and restored instruments. He has been honored by the Archdiocese of Chicago for excellence in Hispanic ministry and been invited to perform several organ recitals over the years.

DuSell exudes an attractive blend of confidence and humility when he says, “I look forward to reaching out to the choir and the parish with a sense of welcome and invitation so they feel comfortable sharing their gifts. We succeed when we support all with a prayerful and joyful spirit. I am very happy to be home.”