Called by name and precious to God 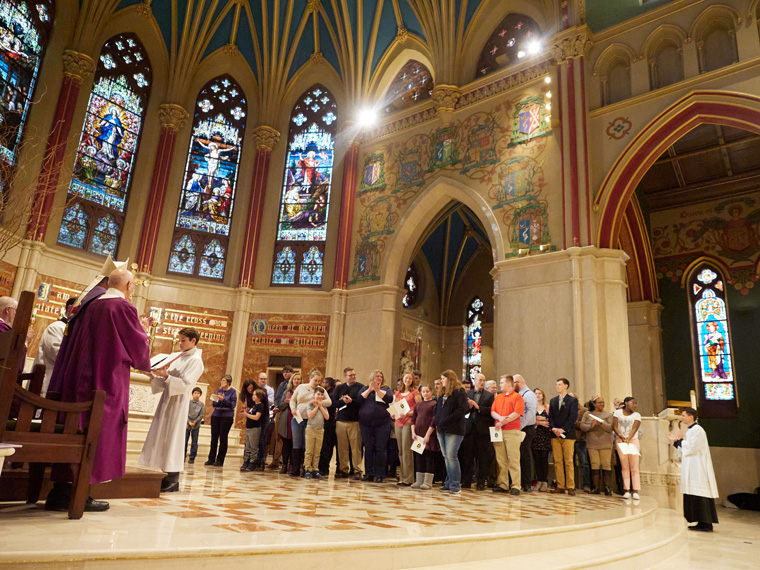 Rite of Election celebrated at Cathedral 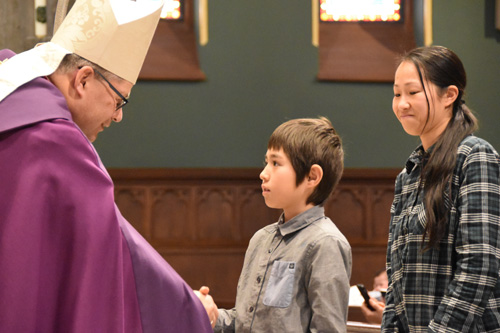 Catechumens — along with their sponsors, godparents, families, pastors, and RCIA team leaders — from around the diocese gathered at the Cathedral of the Immaculate Conception March 1 to participate in the Rite of Election.

The rite marked a significant step on the catechumens’ journey to full communion with the Catholic Church. Catechumens are individuals who have not been baptized and are preparing to receive the Sacraments of Baptism, Eucharist, and Confirmation in the Church. According to the diocesan Office of Liturgy, 41 catechumens from 21 parishes are preparing to enter the Church at this year’s Easter Vigil.

Additionally, 140 candidates — those who have been baptized previously — will complete their Christian initiation through the reception of the Sacraments of Confirmation and Eucharist at the Easter Vigil. Candidates across the diocese will celebrate the Call to Continuing Conversion in their home parishes the weekend of March 7 and 8.

In his homily, Bishop Douglas J. Lucia reflected on the day’s Gospel reading, Matthew 4:1-11, which related Jesus’ temptation in the desert. The devil tried to get Jesus to disconnect his life from God, the bishop said, and that is “the image that we want to reflect upon today — that here as we celebrate the Rite of Election, it’s all about making our connection with God, just like Jesus did in the wilderness.” 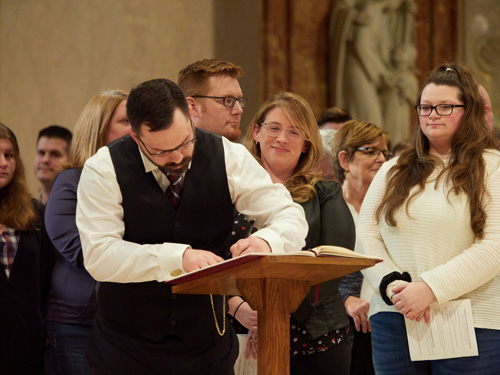 Howard Potter, of Historic Old St. John’s Church in Utica, signs the Book of the Elect. His wife Amanda, who will also serve as his godmother, looks on.

Jesus’ responses to temptation show that he “came to do the will of him who sent me,” Bishop Lucia said. “Today as we celebrate this Rite of Election, it is so important for each one of us to remember that we too have been sent by God. That we have been called by name and are precious to God. And so in this Rite of Election, what you and I are being invited to do is to embrace our call, to embrace who we are. And who we are are God’s sons and daughters. The sons and daughters of humanity.”

The bishop referenced an icon often used on Holy Saturday depicting the resurrected Jesus going into Hell to lead Adam and Eve to new life. “And that is what you and I share in the Easter sacraments. That is what this Rite of Election is all about. It is Jesus grasping you by the hand and literally wanting to bring you into new life with him forever. Today the Church of Syracuse rejoices. It rejoices because you desire to become part of us, but even more because you desire to be a member of the body of Christ. Christ who is risen from the dead. Christ who wants to raise us from death to life.”

Among the elect are Chloe Delano and Howard Potter, both parishioners of Historic Old St. John’s Church in Utica. Both have been preparing to receive the sacraments through weekly classes. Their pastor, Father Thomas Servatius, often stops in to the classes to answer questions.

“The Q&A is an absolute blast,” he said, noting that the Rite of Christian Initiation of Adults (RCIA) is among his favorite ministries in parish life. This year’s class of catechumens is a wonderful group, he added.

Delano and Potter both said their feelings after the day’s celebration were hard to describe. Delano said she became emotional for a moment as she signed the Book of the Elect. Potter concurred, saying it “makes you choke up and tear up at the same time — because you know you’re not the first, you’re just one of the many.”

Potter’s wife, Amanda, will also serve as his godmother. Amanda was born into the faith and began to fall away from the Church as a teenager, she explained. Her journey back to the Church began about four years ago, and she was confirmed last Easter. Howard said he began going to church with Amanda, and one day, while listening to the Gospel reading, “it just kind of sunk in and clicked for me.” Amanda said she is “super excited” to see her husband take this step of faith. “She’s helped educate me the entire way,” Howard said.

Bishop Lucia addresses the catechumens and their godparents.

Chloe Delano, of Historic Old St. John’s Church in Utica, signs the Book of the Elect.