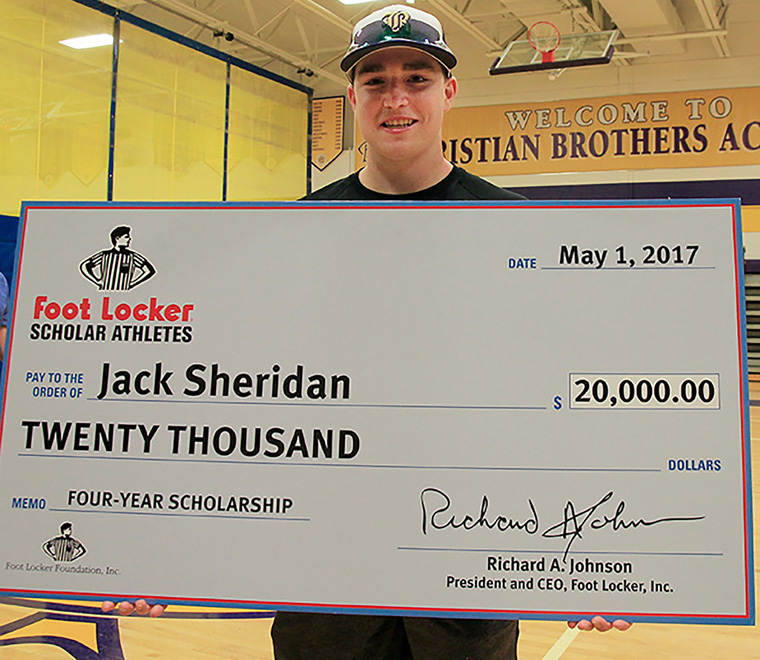 The game was off but the ruse was on.

Christian Brothers Academy was supposed to play Oswego in baseball May 1, but there was a tornado watch. Instead, CBA President Brother Joseph Jozwiak, FSC, announced there would be a “special event” requiring the baseball team’s presence in the gym.

And then, CBA pitcher Jack Sheridan drew whoops, cheers, whistles, and wild applause as if he had just thrown a no-hitter. He accepted a $20,000 scholarship check from the Foot Locker Foundation Inc. to attend Le Moyne College, where he will play baseball next year.

Then he got caught up in media interviews that had him visiting every corner of the gym as if he were trotting around the bases after a home run.

“I just thought we were going to be meeting some kids from the school,” Jack said of Blessed Sacrament School, where he spoke recently. “I had no clue about this scholarship thing.”

Jack was diagnosed with leukemia in May 2014. He entered into a 3½-year treatment regimen that will conclude at the end of September. On the day he accepted his scholarship, he had a monthly hospital chemotherapy treatment in the morning. Also, he takes 24 chemo pills each day until the regimen ends.

In 2014, Make-A-Wish Central New York offered to grant Jack’s wish. Instead of wishing to travel somewhere, Jack wished for CBA baseball-field renovations, including a new bullpen and batting cages. Jack had mentioned these things in his application for the Foot Locker scholarship, but he was starting to get worried because he hadn’t heard anything.

Tom Banaszak, district manager for upstate New York for Foot Locker, said that, nationally, Foot Locker had about 40,000 applicants for 20 college scholarships. Explaining why Jack won, Banaszak said, “Jack seems like an incredible young man. When I heard what he has managed through, and his impact on the school, how he’s going out and speaking to youth, I think he has really made an amazing impact in his community.”

Banaszak added that a Foot Locker committee made the scholarship decision. “Today might be the best part of my job,” he told the gymnasium gathering of baseball players, parents, CBA board of trustees members, faculty, staff, and students from Blessed Sacrament.

“Jack is a young man who has been through a lot for a person his age,” Brother Joseph said.

He added: “Jack has demonstrated perseverance; he’s demonstrated a sense of faith, a tremendous hope, and a spirit of gratitude for all that he has received.”

Jack’s wish to improve the Brothers’ baseball field “just shows his character and the spirit of gratitude that he has,” Brother Joseph said. “He is an outgoing, service-minded, gratitude-filled young man. And I think he is most deserving of this award by Foot Locker.”

Asked why he deserves the scholarship, Jack said, “I like to think I lead by example. I try to do the right thing. And then I think my whole Make-A-Wish thing, giving my Make-A-Wish to the field, rather than using it for me and my family. I think that was sort of the main thing that helped me win this.”

“It is huge,” Jack’s mother, Kim Sheridan, said of the scholarship. “It’s going to help us tremendously with the bottom line of school.” The medical bills are really tough, she said. She is grateful for CBA, Make-A-Wish, Foot Locker — “the people that support him and the people that pray for him. If it weren’t for them, we would not even be in this position today. So we thank all of them for all of this, really.”

She figures that Jack can do anything he puts his mind to. “And when he wanted to apply for this … I said, ‘That’s great.’ I said, ‘Jack, you know there’s 40,000 kids that probably have applied for this scholarship, and you need to be one of 20.’

The $20,000 will be divided into $5,000 payments for each of Jack’s four years of college. The actual check is a giant piece of cardboard, about 3½ times the size of home plate on a baseball field. The Sheridans have a special place picked out to display the check. Kim will bring it to Jack’s CBA graduation party too.

As a scholarship contender, pitcher, and hitter, Jack has a decisive way about him. He said, “I’d characterize myself as a strike thrower — I just get outs. … [If] you don’t walk guys, you’re going to be all right.”

Asked if he guesses which pitch is  coming when he is at bat, he said, “No, I’m just looking for a fastball and then adjusting. So if someone throws me a first-pitch fastball, middle-out, … I’m hackin’.”

A visitor suggested that his selflessness with his Make-A-Wish dream ultimately netted a real gain for him.

“Yeah, it’s funny how that works,” he said before running over for a TV interview. “If you do the right thing and you are selfless, things tend to work out for you.”