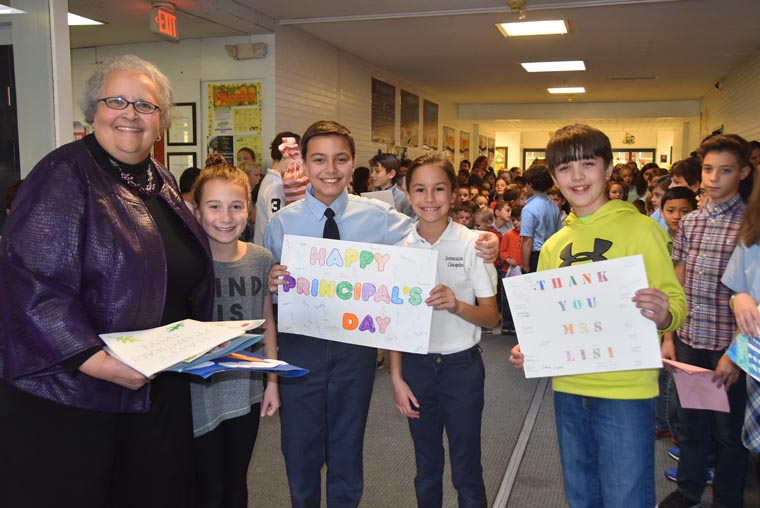 During the liturgy marking their graduation, kindergarteners from Immaculate Conception School  highlighted the many blessings of kindergarten — and they made sure to include their principal, Sally Lisi.

The June 19 graduation was Lisi’s last as IC’s principal; she is retiring after 16 years at the school and 40 years total in Catholic education.

She dedicated those years to Catholic education because there’s something about watching a child “and seeing that spark,” she said after the graduation. But more than that, it’s the ability “to touch their hearts and souls with the love of Jesus.”

Lisi’s career in Catholic education began when her son Dominick was in second grade at St. John the Baptist School in Syracuse. One day, the principal asked her to substitute teach.

“That’s what did it,” she recalled. With a degree in education, she had worked in public schools, but coming into a Catholic school, “there was something different,” Lisi said. She ended up long-term subbing that year, and she was hired to teach first grade the following year. In her 24 years at the school, Lisi taught first and fifth grades and served as principal. She became IC’s principal in 2001, following the closure of St. John’s.

There was “nothing better” than teaching those first graders, Lisi recalled. “It was more than a job — it was a vocation,” she said. “That’s how I see it with all of our staff. It’s a vocation for them. They wouldn’t be here if it wasn’t.”

The teachers are part of what makes the IC community special, Lisi said. “Every teacher knows every child,” and among the families, “there’s a sense of community that’s created,” she said.

Reflecting on her time at IC, Lisi shared two of her fondest memories.

“One would be my grandson [Dominick] graduating from sixth grade and being able to hand him his diploma,” she said. Another grandson, Anthony, is going into sixth grade next year. “Just to have them here and watching them grow in their Catholic faith and into great students certainly has been my fondest memory,” she said.

Her other memory is of the students who faced challenges in learning. “To watch them, day by day, grow — that’s where I see what we do here,” Lisi said.

Lisi said she hopes she’s leaving behind a strong Catholic identity at IC. “We focused on the service end and giving to others,” she said, “Right from pre-k on up, we stress how good God has been to us and now it’s our turn to give back, to say thank you. We can always share what we have, no matter low little or how great.”

And as she retires, Lisi says many of her own thank yous — to IC’s pastors, to the staff of the diocesan Catholic Schools Office, to the diocese’s bishops for their support of Catholic education, and to the school’s team: “You couldn’t ask for a better staff,” she said.

Father Tom Ryan, pastor of Immaculate Conception Church, commended Lisi for being a professional leader as well as a personal one, a principal who knows every student and parent by name and greets the kids every morning as they arrive at school.

He also praised her concept of Catholic education, which weaves together Catholic identity, excellence in academics, and service to the community. “I think IC is known for its Catholic identity and its academic excellence, and that’s due in large part to her leadership as well as to the dedication of our teachers,” Father Ryan said. Lisi was instrumental in achieving the school’s Middle States accreditation and initiating its Blue Ribbon School process, he noted. “She has left a very, very strong foundation for the next person to build on,” he said.