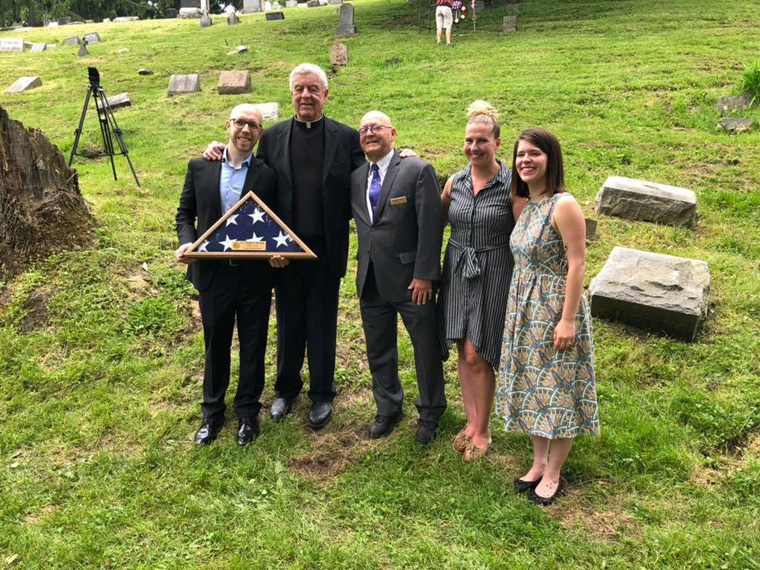 Members of the Mattydale American Legion Post offer a gun salute at the memorial.

Last month, members of the Syracuse community gathered to honor former resident Private Thomas F. Butler. The event was organized by volunteers for the sole purpose of paying their respects to an individual who had been long forgotten.

Born in Ridgeway, Ontario, in 1888, Butler’s family moved to Syracuse when he was young and settled at 411 Seymour Street.

Butler lived on the West side of Syracuse until he left home to work on Mississippi riverboats at the age of 21. Soon after, he decided to join the Army in St. Louis. In 1916, he was a member of the 13th Cavalry Regiment, stationed at what is now known as Camp Furlong in Columbus, New Mexico.

According to Columbus historian Richard Dean, Butler’s regiment acted as a border patrol unit. Butler spent his days on horseback riding east to west, west to east, along the U.S.-Mexico border, ensuring that anyone crossing into the country stopped at a customs house and paid any necessary taxes.

Just south of Butler’s post, a bloody civil war was raging in Mexico as several regimes were fighting for power. One of those rebellion leaders was Francisco “Pancho” Villa.

It is believed but still debated that while battling for control in Mexico, Villa became upset that the American government seemed to have shifted its support from him to an adversary, provoking him to respond with force. 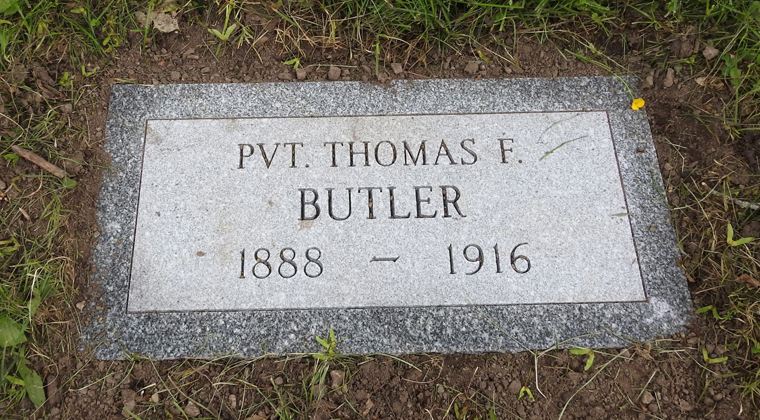 Before dawn on March 9, Villa and his men, known as Villistas, moved north and attacked the people of Columbus, burning their settlement and looting their homes. Surprised but prepared, the soldiers and residents acted quickly, engaging in battle until the Villistas retreated in less than two hours.

In the end, 18 Americans — 10 civilians and 8 soldiers — perished at the hands of the Villistas. This was the last time the United States was attacked by a foreign power with boots on the ground.

One of those killed was Butler. Colonel Herbert Slocum, Commander of the 13th Cavalry, listed Butler’s injuries on the casualty report as two bullet wounds to his arm and another to his chest. He was 28 years old.

Upon his death, Butler’s body was returned to Syracuse by train on March 16 and a service was held the following day. “Seldom has there been a funeral service in Syracuse as impressive as that of Private Butler,” the Syracuse Herald wrote.

Beginning on Seymour Street, Butler’s body was displayed within his former home as hundreds gathered inside. Outside, hundreds more filled the street to honor the fallen soldier.

Following a prayer service, Butler’s body was transported by horse-drawn carriage to St. Lucy’s Church in a procession that included family, friends, veterans, and public officials. Father John Sheridan spoke of Butler’s dedication to the country, stating, “We are assembled today to honor this American soldier who died in defense of his country. We are here to offer our tenderest sympathy to the bereaved, the saddened and sorrowful parents, brothers, and sisters. We are here to tell them of our great appreciation of what he did individually in the performance of his duty; he died that others might live.”

A second procession led to the snow-covered St. Agnes Cemetery, where salutes were fired as Butler’s body was placed in a vault until a planned spring burial.

This little-known story was originally unearthed in 2017 while I was conducting research on homes on Seymour Street and came across the aforementioned funeral. Knowing what went into the memorial, I had to see his tombstone. The weird thing was, I couldn’t find it.

Newspaper reports from 1916 stated Butler was going to be moved to St. Mary’s Cemetery in the spring, but there was no record of him there.

That’s when I enlisted the aid of Danielle Rafte, Family Services Manager with Syracuse Catholic Cemeteries, who was able to pinpoint his specific burial location: Section 28, Grave #127, in St. Agnes Cemetery.

For unknown reasons, Butler was never provided with a tombstone or marker. Rafte also noted that although Butler’s body was returned to Syracuse that March, his burial didn’t take place until July — although burials were happening throughout that time period.

Today, we still aren’t sure why his grave was unmarked, but we knew we wanted to fix that. 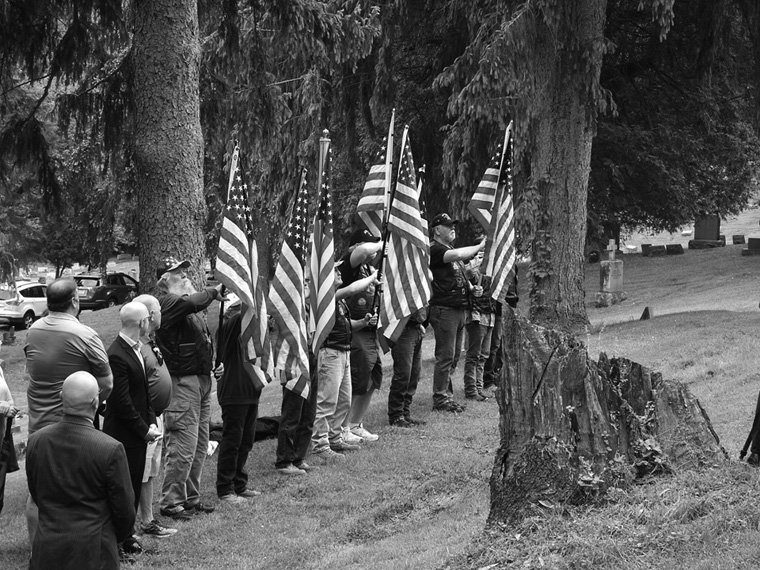 Patriot Guard Riders of New York at the memorial.

Plans began to formulate in the fall of 2018. I reached out to Karl Lutz Monument Co. to request a quote regarding a marker. Upon hearing the story, Lutz offered a discounted price and I began a GoFundMe page that within two hours raised the funds necessary to order the marker.

One of the contributors was Eileen Hollis of Hollis Funeral Home. Not only did she provide financially, Eileen and her father, Charlie Hollis, offered to help organize a proper service for Butler once more.

Syracuse Catholic Cemeteries waived the setting fee typically required for the installation of a marker.

The service to honor Butler took place on June 1 and included Patriot Guard Riders of New York and a moving gun salute offered by the Mattydale American Legion Post.

Although we have been asked how many others, like Butler, are lying unmarked and forgotten, we can be proud of our work as a collective. One fewer person, one fewer story goes unknown and untold. On this day, Syracuse remembered one of its own who gave his life for our country and our city.

David Haas is a lifelong resident of Eastwood, a neighborhood on the northeastern side of Syracuse. He is the Executive Director of Sarah’s Guest House, a healthcare hospitality home. Haas began telling historical tales about the city on his Instagram account, @SyracuseHistory, in 2013.