Concert glories in ‘the magic of Christmas music’ 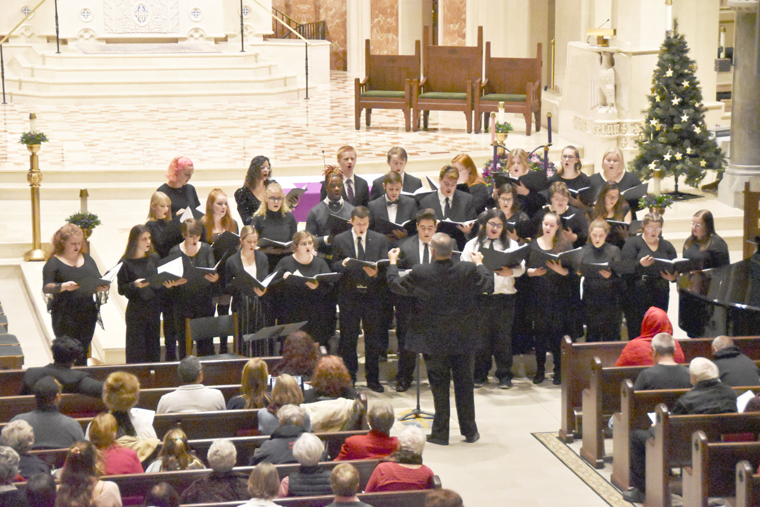 It was basically a heart-song for Christmas.

“A Program of Lessons and Carols” on Dec. 6 featured the Cathedral Choir and the Onondaga Community College Concert Choir. And hundreds of people in the pews joined in at the Cathedral of the Immaculate Conception in Syracuse.

“I think it was a great concert,” said Father Joseph Clemente, who organized the concert with Alan Lynch, the cathedral’s music director and organist. “The choirs really sang from their hearts, and they really created that sense of the magic of Christmas music.

“I think the singing was particularly angelic; and especially the young voices were so beautiful tonight, and so was that contrast between the young voices and the more mature voices singing to one another and we were in the middle of it; we were embraced by it.”

“It’s great to have so many singers and the community,” Music Director Lynch said. “I think the whole point of doing Christmas at the Cathedral is it involves so many people. … It’s just wonderful to have this amazing cultural experience downtown.”

Music Director Lynch, who performed on the cathedral’s Roosevelt-Schantz organ, said: “It’s rewarding as an organist to play when you hear so many people singing. It’s very rewarding.”

Father Clemente added: A “good organist knows how to lead and make the organ do what it was designed to do in a big room.”

Carols included “Away in a Manger”; “O Little Town of Bethlehem”; “Angels We Have Heard on High”; “Silent Night”; and “Hark! The Herald Angels Sing.”