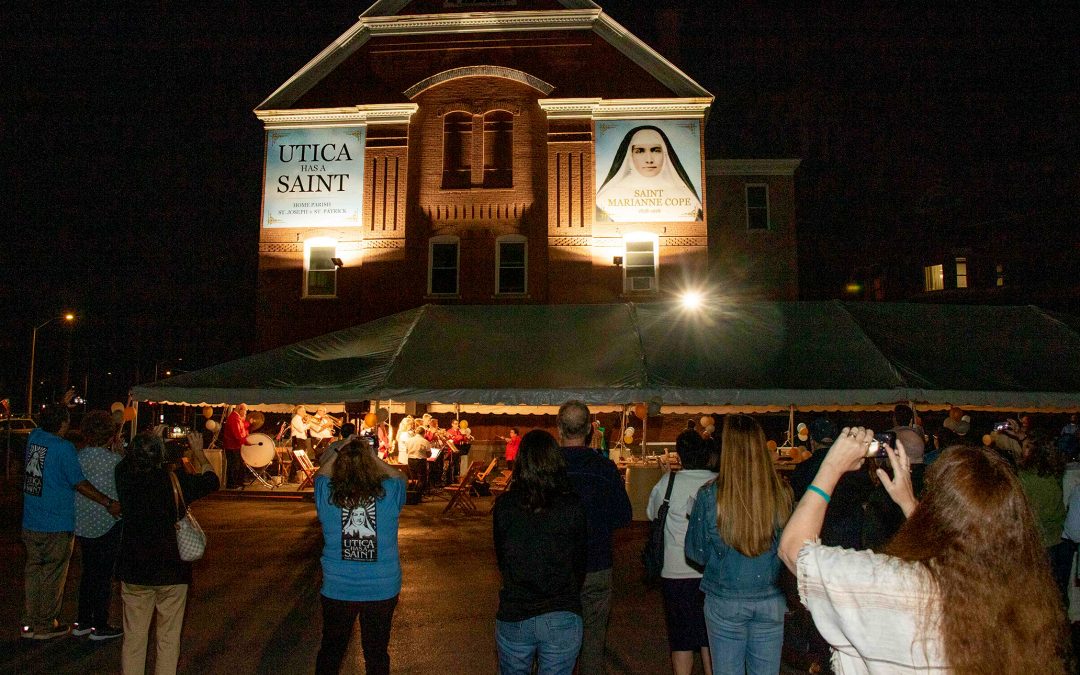 Illuminated at St. Joseph and St. Patrick Church are the St. Marianne portrait and the “Utica Has a Saint” sign.

With a visible theme of “Utica Has a Saint,” Utica area churches celebrated the 10th anniversary of St. Marianne Cope’s canonization a month early.

Planned by the joint St. Marianne Cope Committee representing a number of parishes, the Sept. 17th celebration featured a parking lot festival at St. Joseph and St. Patrick Church, with a face-painting booth for children and a huge tent where 225 barbecued chicken dinners were served and where performers kept the crowd humming and swaying.

Emcee Anthony LaBarbera belted out a host of pop and oldie favorites, walking among the dinner tables and enticing members of the crowd to sway to the music and even dance.

For a change of pace, Irish fiddling soundtracks reverberated through the air as young dancers from Butler-Sheehan Academy of Irish Dance kicked up their heels in unison and swooped across the parking lot. The crowd had a hard time sitting still.

The dancers were followed by singer/songwriter Maureen Griffin who shared her own country songs, some telling tales of her motorcycle escapades.

There was a brief pause in the entertainment as Assemblywoman Marianne Buttenschon presented a citation from the New York State Assembly, recognizing St. Marianne’s Utica roots and impact, including a soup kitchen named after her. Father Richard Kapral, pastor, held the citation aloft to cheers and applause. The crowd also heard from Ellen Benten, OFS, who chairs the St. Marianne Committee; Clinton Mayor Elizabeth Tantillo, who is a member of the St. Marianne Committee; and Lucretia Hunt, representing the City of Utica.

Then Christian folk singer Cassandra Harris-Lockwood and her “St. Marianne singers” performed her original tribute to the saint who grew up in St. Joseph & St. Patrick Parish before entering the Sisters of St. Francis.

La Banda Rossa (the Red Band) concluded the evening of entertainment with an Italian pops concert.

As dusk settled on the festival, Father Kapral took to the microphone and offered a blessing on two 12-foot St. Marianne signs looming above the huge tent, and then hit a switch, illuminating the banners. One features a portrait of St. Marianne and the other proclaims, “Utica Has a Saint.”