Cousins with a cause: missionary priest, nurse nun 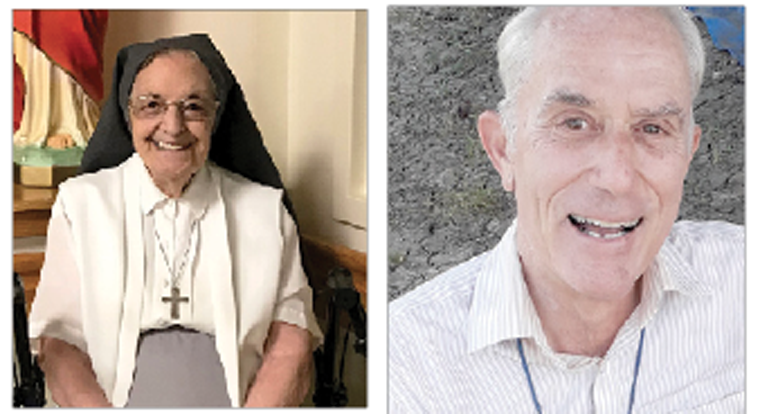 They grew up only 50 miles apart, unaware  the other was drawn  to ministry too

Both cousins picked ministry … unbeknownst to the other.

Father Michael Bassano, 71, was born on Dec. 22, the same calendar day when Mother Cabrini died. “It was a sign of a calling to be a missionary as well,” he wrote in an email.

The Binghamton native now is a Maryknoll missionary serving as the Catholic chaplain for people who have been displaced by civil war in the UN Protection of Civilians (POC) camp in Upper Nile State, South Sudan, where his routine includes writing poetry.

Impressed as a youth by the happiness of the nuns who instructed her, Sister Joan Marie Sariti, MSC, 95, Father Bassano’s first cousin once removed, became a nurse — “that’s what I like.”

A native of Scranton, Pa., about 50 miles from Binghamton, she is one of 18 sisters living at Sacred Heart Convent in Lower Manhattan. A priest brings her copies of the Catholic Sun so she can read about her cousin’s life in the African country.

“As I was growing up in Binghamton and was deciding to become a priest,” Father Bassano wrote, “my parents and family never told about my cousin who is a religious sister. I finally found out about her years later.”

“I didn’t know he was going to be a priest until he was ordained,” Sister Joan Marie said, “and then we went up to Binghamton before his first Mass. It was in ’75. And then we went back again in 2000 when he had his 25th up at Maryknoll — a nice Mass and luncheon out on the grounds, under the tents, beautiful,” the last word pronounced in classic Big Apple style: “beauteeeeful.”

Father Bassano, who was ordained by Bishop David F. Cunningham on May 16, 1975, called his cousin “a creative, amazing woman” with “a funny sense of humor and warm personality. Her story helps me to understand my own journey as a missionary. My own mother’s name was Mary Josephine Sariti, so my connection with Sister Joan brings back memories of my mother’s side of the family who were all immigrants to the USA so many years ago.”

Her family didn’t have a car, Sister Joan Marie said, but her Uncle Henry drove her up to Binghamton to see Cousin Mike’s family, “and at that time they didn’t have the highway, it was the long way. … His mother was very religious and so was his grandmother. She always had the rosary in her hand. … Very religious and I think that’s where he got his calling, from a holy family, really.”

A public-school student, Sister Marie went for catechesis, First Holy Communion, and Confirmation instruction to the nuns who had a convent in the school that was connected to St. Lucy’s Church in Scranton.

“I went to visit them every Tuesday when I went for the novena,” she recalled. “And … they seemed so happy, so I said, Well, this is really what I want.”

The school is now a senior-living center but the building “still has Mother Cabrini on the top carved in granite.” St. Lucy’s Church is still functioning.

Sister Joan was a postulant and a novice in West Park in Ulster County, and after she professed there, she went to Chicago to study nursing. “When I was professed,” she said, “I took the name ‘Lucy,’ after our parish church, but in ’73 I went back to my baptismal name.”

She made her final vows in Chicago, where she graduated from the nursing school at the now-closed Columbus Hospital. Within walking distance was DePaul University, where she earned her bachelor’s and master’s in nursing. She worked at two hospitals in Chicago and one in Seattle. She did surgical and pediatric nursing and she also worked in nursing administration.

Sister Joan Marie taught herself how to play the pipe organ, and while at Columbus Hospital she played for all the Masses and for sisters’ funerals. She also made the Mass booklets.

Sister Joan hasn’t played a pipe organ since leaving Chicago. At the sisters’ assisted-living residence in Manhattan, “I do everything myself,” she said. “We have our own room, and a television in the room.” On Mother Cabrini’s feast day, Nov. 13, the sisters had a Mass and “a nice luncheon, and a movie in the afternoon.”

Her remaining family lives in New Jersey now, but with the coronavirus pandemic, she did not want to travel for Thanksgiving this year. About two years ago, she did get together with family to celebrate her 70th anniversary of profession of vows.

And a few years ago she enjoyed a visit from Father Bassano and his brother Ted, who lives in southeastern Pennsylvania. “We had Mass and lunch,” she recalled, “and then he told the sisters all about South Sudan. So it was very interesting. … I hope he’s safe.”

Father Bassano has served Maryknoll in Chile, Thailand, Tanzania, and, steadily since 2014, South Sudan. His article titled “Displaced by War in South Sudan” runs in the Winter 2021 issue of Maryknoll magazine.

The article states: “Approximately 30,000 people are cramped next to each other in plastic tarps or tin-sheet houses. Each family receives a two-month supply of sorghum, cooking oil, soap, and cereal mix for the children, which is … just enough for them to live on.”

A request to the poet

His next home leave is scheduled for May 2021, but that depends on the situation with coronavirus. A nurse at Maryknoll Health Services recommended that he wait to see what happens with the vaccines.

Sister Joan Marie keeps up an email correspondence with him. In October, she wrote to him: “I sent you the video of the unveiling of the statue of Mother Cabrini [in Battery Park, NYC.] I thought of all of your poems which are so beautiful. While you are still in quarantine, could you do a poem about Mother Cabrini? That would be great. Thanks! Ciao!” (Find Father Bassano’s poem at right.)

On March 10 Sister Joan Marie will be 96. Offered congratulations, she chuckled like a soprano.

Restricted in his movements by the coronavirus pandemic and concerned about political tensions, missionary Father Michael Bassano nevertheless focuses on concrete assistance for what he has called the “vulnerable population” in the “forgotten country” of South Sudan.

The Binghamton native is the Catholic chaplain for people who have been displaced by civil war in the UN Protection of Civilians (POC) camp outside the town of Malakal in Upper Nile State. Up to about 3,000 of the 30,000 displaced people are members of his parish.

Among his recent dispatches to the Sun, Father Bassano wrote: “Even in these tumultuous times we can still give thanks for the simple things of life, for the gift of life we share together and for the ability to uplift the lives of others around us each day.”

He reported that a grinding mill was recently installed in the town of Adong in Baliet County (population about 4,000), east of Malakal in northeastern South Sudan. The people grind sorghum and make it into food.

“The grinding mill helps not only the people of Adong,” Father Bassano wrote, “but the two neighboring villages as well.”

He said donations to his Maryknoll mission account were instrumental in buying the $7,000 mill, with joint funds from UNHCR, the UN Refugee Agency. To help Father Bassano’s missionary work, send a check, noting that it is for Father Michael Bassano’s Mission Account, to Maryknoll Fathers and Brothers, P.O. Box 305, Maryknoll, N.Y., 10545.

“Not only is the grinding mill functioning now but also we continue to distribute rice to people in need of food throughout the surrounding areas of Malakal,” Father Bassano wrote. “The funds to buy rice come from the Maryknoll Famine Relief project from people in the states who have been so generous to us to help the poorest ones here in need of food.

“We just distributed 100 bags of rice (20 kilos each bag) to the most in dire need of food. We will continue with the staff of UNHCR to continue to reach out to those in need. Since I am restricted from going out to help with the distribution of rice due to COVID-19 restrictions, my heart is grateful to the staff for going out to bring the food.”

He wrote that as of last week, there were 155 confirmed cases of COVID-19 in Upper Nile State, including 46 cases in the POC. Father Bassano, who turns 72 on Dec. 22, lives in the UN compound near the camp in his shipping-container room. He watches the sunrise and sunset, takes walks while social distancing, writes poetry, and reflects on his life among the people there.

“Since there has been no testing for over a month due to lack of testing and a breakdown of the testing system,” he wrote, “we really do not know how many more cases there are here. So we remain vigilant and keep preventative measures in place. There have also been nine deaths reported throughout Upper Nile State.

“The political tension remains high as both government and opposition parties are at odds over the nomination” of a general as governor of Upper Nile State (the only state of 10 states that still has no governor). “We hope and pray for a peaceful resolution without a return to violent conflict.

“Our Catholic church in the camp will be celebrating the upcoming holiday season with the younger priests coming from Malakal town to be with the people. Because of COVID-19 restrictions, I still cannot go to the church due to my age but continue to be in contact with the people through our radio broadcast over Nile Radio.

“Wishing you and all in the Diocese a wonderful Advent and Christmas season full of hope for a better time and new year to come in our lives especially as we thank God for the forthcoming vaccines that will get us through this pandemic.”