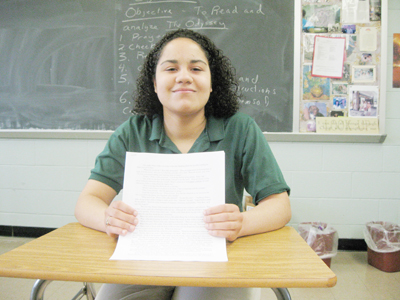 Kings, princes, gypsies and amulets all go into the making of a great fiction story. And they all figure prominently in the award-winning story Bishop Ludden junior Diane Leccarde wrote for the Young Voices Foundation’s “Picture This” writing contest. She recently found out she won second place.

The budding author feels her first success establishes something she was previously unsure of — her writing ability.

“My dream is to get published,” Diane said. “I know you need to get a name for yourself before you can get published so to win the contest out of hundreds of kids was a wake-up call for me. I thought, ‘Hey, maybe I am a great writer.’”

Diane’s story is five typed pages long and describes the relationship between a father (King Har) and his son, (Prince John). The two butt heads and John feels he never does anything good enough in his father’s eyes. In the end, John realizes how much he meant to the king. The 16-year-old writer has some mature lessons to impart to her readers. Diane’s points are not lost on herself, either.

“Being a writer is a very powerful thing,” Diane said. “It’s a way to get people to listen to you.”

Diane said she has been interested in writing since she was six years old. Making up characters, places and other worlds is fun, she said. If she gets an idea she jots it down on a notepad and it may or may not make its way into a story.

“It’s fun to create your own little world,” Diane said. “Writing is a good way to express yourself. You can say whatever you want in a book. Like in Charlotte’s Web, with the right words, you can change the world.”

Maxine Babcock is Diane’s English teacher and her student’s talent is something she recognizes and nurtures.

“She’s a straight-A English student,” Babcock said. “Diane is a wonderful girl and she does all she can to enhance her writing career.”

One of the more recent class assignments had the students writing poems every day for 30 days.

Diane thought that assignment was fun but at the end of the 30 days, “you were glad it was over.”

She is a religious teenager as well as a thoughtful writer. Diane is part of the Valley of Faith Youth Group formed from St. James and Our Lady of Lourdes Parishes in the Valley neighborhood of Syracuse. One of her poems addressed the way she feels about her youth group.

Our Valley of Faith Youth Group
“I see my friends having fun and smiling at me.
I smell the downstairs, church and gym air.
I hear laughter, joking, and directions to games and play practice.
I feel like this is the perfect place for me.
I taste cookies, chips, baked goods, and other foods.
I think I should be going to school with these kids.”

Diane lives with her aunt and uncle, the Underwoods. Her Aunt Sue teaches at the Bishop’s Academy at St. Charles Borromeo School. They are both very proud of Diane’s writing and her recent award. Her aunt proofread the story before Diane sent it in to the Young Voices Foundation.

“This is such an affirmation for Diane,” Sue Underwood said. “We’re very excited for her and very proud. Diane is a faith-filled girl and her faith is everything to her.”

For Diane, the award is the first bit of recognition for her talent and she said she‘ll continue to enter contests because she is working toward her dream of being a published writer. Meanwhile, her plans include attending Onondaga Community College and then Le Moyne College. Diane said she wants to be an English teacher.

….EXCERPT FROM The King’s Son

When John was done talking, the gypsy shook her head and said, “I have warned ye before, the magic of the amulet cannot be reversed. Thy father shall be dead for the rest of eternity.” John Looked at the woman for what felt like hours. Then, he put his face into his hands and sobbed incessantly. “But, fear not,” the gypsy said. “Thy father mayest be dead, but he isn’t lost.” John looked up at her. “Thy father’s soul is in Heaven,” the gypsy explained. “Where all the souls of the good-hearted deceased be. If thou desirest to talk to him, pray to him. He shall hear thy prayers and answer thou as well. Also, when ye die, thou may go to Heaven and be with thy father for all eternity. But, while ye pray, pray also for reconciliation from the Lord for murdering thy father.” John stood up and thanked the gypsy, jubilantly. Then, he went back to his castle. From that day on, John prayed to his father for advice on how to rule the kingdom. He even prayed to just talk to his father. His father responded to each one of John’s prayers and helped his son make John’s kingdom the best kingdom in the land. Also, John prayed to God for forgiveness for his evil deed and lamented, passionately, how sorry he was. He was soon forgiven. Twenty years later, John caught a fatal cold and died. Just as the gypsy said, John (who had a good heart) went to Heaven. The first one to greet him, after God, was his father. So, John and King Har lived, lovingly, in Paradise together for the rest of eternity. ….