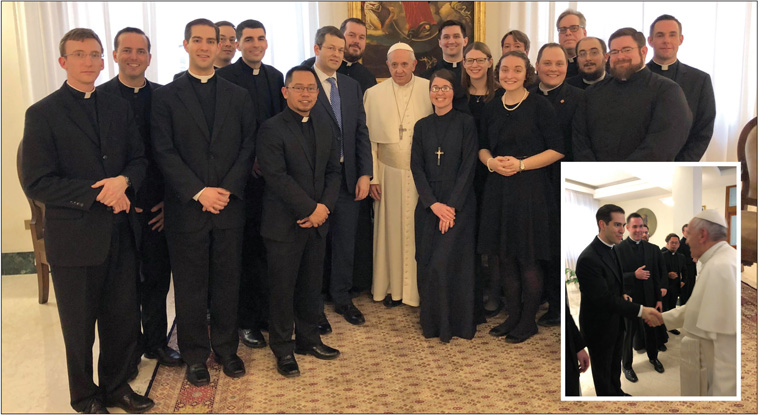 Special to the Catholic Sun

Editor’s note: The Diocese of Syracuse’s Father Christopher R. Seibt is currently studying Canon Law at the Catholic University of America in Washington, D.C. During a recent seminar in Rome, Italy, Father Seibt was blessed to meet Pope Francis. He offered the following reflection on the experience.

On the last day of our Canon Law seminar in Rome, we met with the Vatican Secretary of State, Cardinal Pietro Parolin. What was expected to be a 15-minute greeting turned into an hour-long meeting. During our meeting we discussed many important and interesting topics with His Eminence, particularly about the American Church and Vatican diplomacy.

At the end of our meeting, Cardinal Parolin discovered that we did not have a chance to attend a papal audience during our time in Rome. So, he told us that he would try to arrange an opportunity for us to see the Holy Father and perhaps even greet him briefly. Nevertheless, he made it clear to us that he could not promise this rare opportunity. Our meeting with Cardinal Parolin then ended and we went on with our day.

As we were boarding our bus to depart for Mass at the Basilica of Saint Mary Major, our director, Dr. Martens, told us to move quickly because he had just received a message that we needed to be at the Casa Santa Marta —where Pope Francis lives — in 15 minutes. We made it there just in time (after a bit of running!).

What happened next was something that no one on our trip ever expected: We were escorted into a small parlor and a few minutes later, Pope Francis walked in alone — no security, no secretary, no photographers; no one else. He first greeted our professor, who translated for us from Italian to English, and talked to us about the importance of Canon Law. Then, the Holy Father greeted each one of us personally. Near the end of our meeting, Pope Francis brought us over to an image of Our Lady “Undoer of Knots” and explained the importance of the Blessed Mother in our lives and ministry. He then shook our hands again, took a group photo with us, and departed.

The 15-minute private meeting that we had with him was relaxed and comfortable, and inspiring. It was not only an unexpected surprise but also a gift to all of us at the end of a very enlightening time in Rome during which we learned how the Curia serves the needs of the Pope and the mission of the Church.