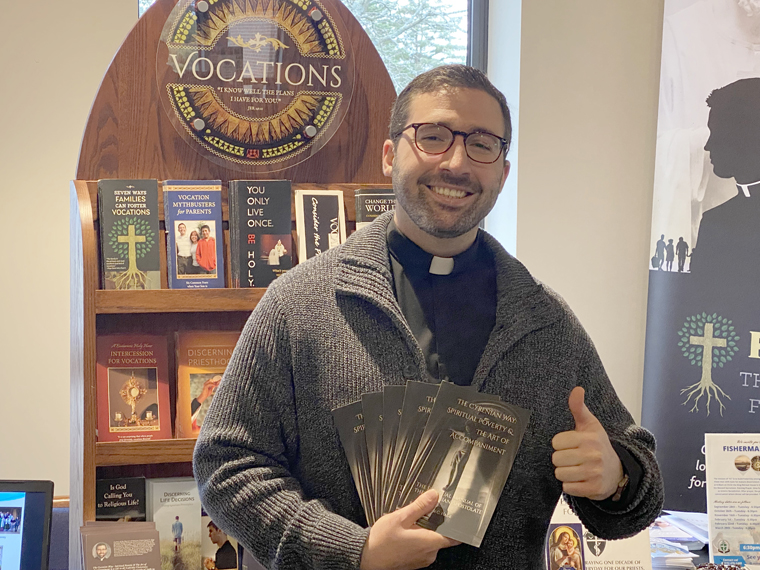 “The Cyrenian Way: Spiritual Poverty & The Art of Accompaniment” is a call to all Catholic Christians throughout the world as well as to all people of faith to acknowledge their spiritual poverty as the greatest treasure that one could ever possess.—Amazon

One never knows where the work of the Holy Spirit might take them in their lives. For Father Jason Hage, what started as a persistent thought in the mind of a young seminarian has become a published testimony to the spirit of poverty.

On March 22, the pastor of four churches in Madison and Oneida counties and director of the diocesan Office of Vocations became a published author, the fulfillment of an urging he first felt over 10 years ago and a continuation of a personal journey.

“It actually started to come up in my prayer life as a second-year theology student in seminary,” shares Father Hage. “During my spiritual direction, the spirit of poverty kept coming up. I really don’t know why it became such a strong theme in my spiritual life. “

A spirit of poverty is an “awareness that we stand empty-handed before Christ on the Cross” according to the book. It allows us to be filled with the Spirit as God calls us to be part of the plan for salvation. Fast forward in Father Hage’s life to 2020, six years after his ordination.

“I started with a different spiritual director … and it started to come again with force,” relating the conversations he was having about his spirit of poverty. His director said, “There’s a lot going on here, I think you should start to write this down.” Father Hage was astounded by that idea. “I was like ‘What!?’”

The intent in recording his thoughts was not to author a book, but to be able to recognize what was going on in his spiritual life and to articulate on the theme in a more intentional way.

“I started to write, and it was amazing: It just wrote itself,” he says. Father would only write when he felt inspired to, sometimes going months between chapters. He soon realized that his own reflection on spiritual poverty related to his ability to walk with others going through their spiritual challenges. So, he called together a group of laypeople, all young adults who were married with families, working full time. His spiritual advisor suggested that he felt “like the reflection pieces could be really helpful to a meaningful lay spirituality because it’s so simple and accessible.” This became his test group as they explored the ideas, as well as his editors, meeting each time a new chapter was written and digesting the material in conversation.

“Each chapter is the fruit of those dialogues,” Father says. This is also where the apostolate was born, among the people taking up the call to a poverty of spirit. “That’s why the word apostolate came up,” Father explains. “It’s for anyone. It’s not meant to take over your spiritual life, it’s not meant to replace your spiritual life. … It’s meant to assist and support you as you go deeper into your relationship with Christ.”

Father Hage put the project in the hands of the Lord. He was a little embarrassed by the thought of publishing the book, but he submitted the manuscript to Bishop Douglas J. Lucia’s office in January for review, deciding that he would follow whatever course opened for him. In March, the Bishop granted his imprimatur and nihil obstat, basically his favorable judgment and permission for publication.

From there, Amazon put the finishing touches on the book which was released on March 22.

Father Hage hoped that the book might be something that would be available in the vestibule of churches where its brief text would “disarm any hesitation to pick up this book, be accessible to all, and just provide that direction … ‘how do I go deeper in my relationship with Christ?’”

What does Father hope people will experience in the book? A recognition of their own spirit of poverty, of course, but also a realization of how one might make a difference in their home or neighborhood.

“God is doing great work in all of us,” Father says. “Never underestimate what God wants to do right here in our midst … in our local church.”

“The Cyrenian Way: Spiritual Poverty & The Art of Accompaniment” is available online at Amazon.com.