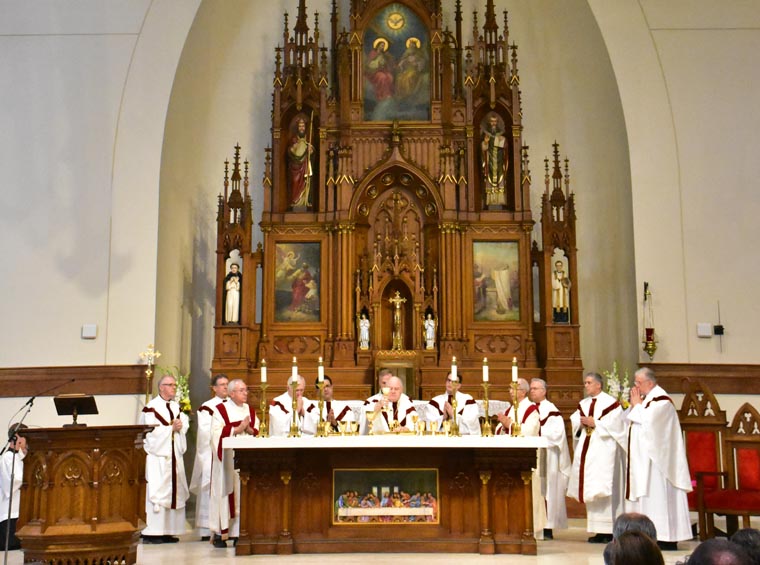 St. John the Baptist Church in Zachary, La., was dedicated April 30, and though the construction is brand-new, some of the elements inside are steeped in history.

The soaring high altar, the Stations of the Cross, the baptismal font, and other fixtures that now fill St. John’s once filled the former Holy Trinity Church in Syracuse.

Founded to serve German immigrants who lived on Syracuse’s North side, Holy Trinity was built in 1891, followed by a new structure 20 years later. In 2010, due to population changes and financial concerns, the diocese closed Holy Trinity and merged it with nearby St. John the Baptist Church. Today, the building is the home of Masjid Isa Ibn Maryam (Mosque of Jesus, the son of Mary).

Father Jeff Bayhi, pastor of St. John’s in Zachary, explained in a phone interview with the Sun that he shared with a group of priests on retreat several years ago that he was looking to build a new church using reclaimed materials. A priest friend from the Diocese of Syracuse told him about Holy Trinity’s recent closure. Father Bayhi and his parish’s building committee thought Holy Trinity was “magnificent,” he said.

Negotiations to buy the church and its contents began, however local preservation and planning bodies did not approve the removal of the stained glass windows from the structure. The Louisiana parish ultimately purchased the former Holy Trinity’s contents.

“I think the beautiful patrimony of our past has long been lost — the old world craftsmanship, the undeniable Catholic identity that comes with some of that beauty,” Father Bayhi said of his desire to use reclaimed elements in the new church. Replicating or affording such craftsmanship today would be impossible, he noted.

Acknowledging the former Holy Trinity parishioners who were upset by the pieces being sold, Father Bayhi said, “I hope they understand that as difficult as it is to lose a parish — and I truly understand that — at least the beauty and the dignity of that beautiful church still lives on.”

“We are eternally grateful to the people of Syracuse,” he added.

The new church for the growing, 1,400-family parish measures 18,000 square feet and seats more than 800, according to The Catholic Commentator, the newspaper of the Diocese of Baton Rouge, La. Another tie to the Syracuse Diocese: The altar contains a relic of St. Marianne Cope, the Franciscan sister who lived and ministered in the diocese and in Hawaii and who was canonized in 2012.

“It was Easter season, and it’s all about resurrection,” Father Werner said of seeing the pieces in the new church. “So to be down there and to see all this beautiful artwork restored to a dignity it had before, it was just nice.” Walking in was a “wow moment” for him.

The experience “speaks about the nature of our religious tradition and faith: that it goes on,” he added.

The Sun offers special thanks to The Catholic Commentator, the newspaper of the Diocese of Baton Rouge, La., for photos and background provided for this story.