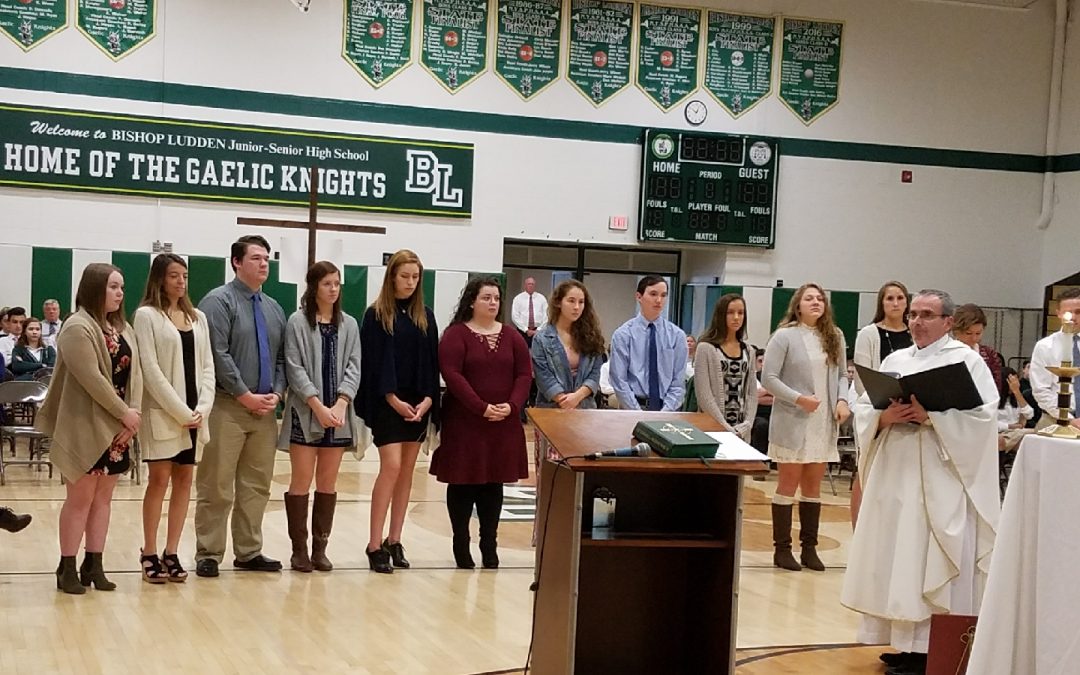 Continuing a longstanding tradition of faith and service at Bishop Ludden Jr./Sr. High School in Syracuse, a new class of senior Eucharistic Ministers was commissioned at the school’s All Saints Day Mass Nov. 1.

Father Dan Muscalino, who teaches religion, Latin, and Greek at Ludden, and who is marking his thirtieth year at the school, said he began the tradition years ago for several reasons.

“First, so that when we have large school Masses, we have the seniors help with Eucharistic ministry,” Father Dan said. “Also it’s really nice for them. I think it helps their faith.”

Father Muscalino said he does not recruit students to the ministry, but rather explains the tradition and the criteria — ministers must be confirmed, practicing Roman Catholics — and allows students to make the decision for themselves.

The students participate in a two-class training session, which includes reviewing what Catholics believe about the Eucharist and rehearsing distributing the Eucharist. The class is then commissioned at the school’s All Saints Day Mass, during which several of the new ministers then serve.

Tills said he was drawn to the ministry after his parents recently became Eucharistic ministers. “I wanted to do it because I thought it was a chance to grow my faith,” he added.

Rauch reflected on her calling to the ministry: “Receiving the Eucharist is one thing — it’s sacred in itself,” she said. “So to be able to share that experience with someone else and actually be able to hold it in your hand and give Jesus to someone else seemed really special to me. 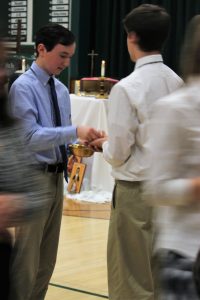 Though Rauch and Tills did not minister at the Nov. 1 Mass — ministers are assigned to serve alphabetically by last name, so they’ll minister at one of the upcoming monthly school-wide Masses — both said it was pretty cool to watch their peers do so.

And those students’ examples are another important aspect of the tradition of the ministry, Father Muscalino noted.

“It’s also an important witness to the younger kids — that it’s okay to be a public witness to your faith,” he said. “Fortunately Bishop Ludden is one of the places on the planet where we do publicly witness to our faith.”