Everyone must respect the basic human rights of all human beings, pope says 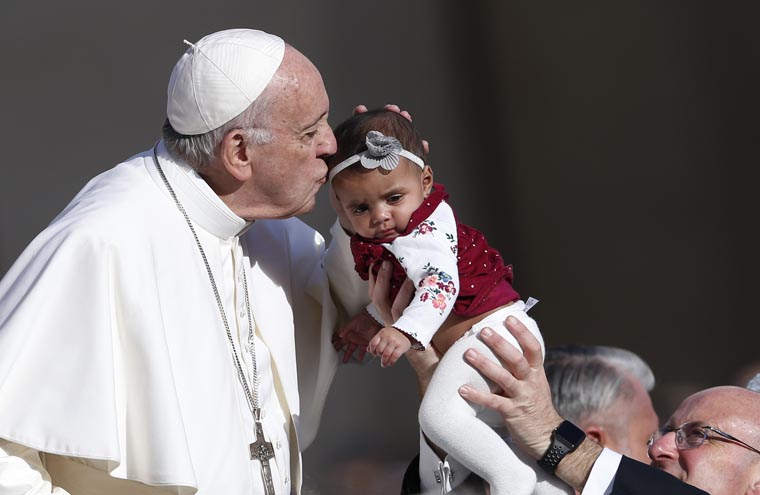 VATICAN CITY (CNS) — The fundamental rights of all human beings, especially the most vulnerable, must be respected and protected in every situation, Pope Francis said, marking Human Rights Day, Dec.10.

“While a part of humanity lives in opulence, another part sees their dignity denied, ignored or infringed upon and their fundamental rights ignored or violated,” he said.

Such a contradiction leads one to ask “whether the equal dignity of all human beings — solemnly proclaimed 70 years ago — is truly recognized, respected, protected and promoted in every circumstance,” he said in a written message.

The message was read aloud by Cardinal Peter Turkson, prefect of the Dicastery for Promoting Integral Human Development, at a Dec. 10-11 conference at the Pontifical Gregorian University discussing the “achievements, omissions and negations” in the world of human rights today.

The Universal Declaration on Human Rights was adopted by the U.N. General Assembly Dec. 10, 1948. It detailed core principles that guaranteed the fundaments rights of every person.

In his message, Pope Francis said, “numerous forms of injustice” still exist in the world today, which seems to have no qualms about exploiting, rejecting and even killing human beings.

In addition, he said, there are those who live “in an atmosphere dominated by suspicion and disdain, who are the targets of acts of intolerance, discrimination and violence because of their race, ethnicity, nationality or religion.”

“Finally,” the pope wrote, “I cannot forget all those who are subjected to multiple violations of their fundamental rights in the tragic context of armed conflict while the unscrupulous merchants of death get rich off the price of their brother and sisters’ blood.”

Everyone is called to play his or her part “with courage and determination” to stop those ongoing violations of basic human rights and promote respect for the fundamental rights of every person, “especially those who are ‘invisible,’ those who are hungry, thirsty, naked, sick, foreign or detained, those who live on the margins of society or are rejected.”

Pope Francis appealed to all world leaders “to put human rights at the center of their policies,” including policies concerning development, “even when that means going against the tide.”

Speaking at the conference, Cardinal Pietro Parolin, Vatican secretary of state, said the declaration was intended to “combine the values of humanity with the formulations of rights” to prevent violence and eliminate inequality.

“It is not just a question of defining rights on the basis of abstract peaceful coexistence or environmental or climate-based sustainability, but of reflecting on the basic criteria for coexistence between people,” Cardinal Parolin said.

However, he said, there are signs that the shared values that were once the fabric of the document are unraveling, so the world must have “the courage to rewrite legislation to bring values back to the center.”

The cardinal, like other Catholic commentators on the universal declarations’ 70th anniversary, noted the push for a recognition of new rights, such as abortion or euthanasia.

Perhaps, he said, what is needed is a dialogue about values. “Words like dignity, liberty and responsibility are already in the language and aspirations of the human family; in fact, without them, it is not possible to speak of human rights” or hope for the conditions of peace, security, development and cooperation that should flow from a universal recognition of human rights.

“Perhaps the time has come to launch a broad reflection and consultation in the church on human rights, indeed I would say almost on the future of humankind, becoming aware that the classic question, ‘Who are you?’ has been replaced by the highly insidious one: ‘What rights do you want to have?'” Cardinal Parolin said.

In Brussels, Pax Christi International marked the anniversary of the human rights declaration, saying the current period in history is a time to celebrate its achievements and to examine current challenges to its implementation.

“We have become acutely aware from our partners and friends that human rights and those who seek to protect them are increasingly under attack,” a statement from the Catholic peace organization said. “The tireless guardians of these universal rights are faced with a shrinking space in which to do their work.”

Despite the challenges, the organization said it remained hopeful because human rights defenders and people working to protect the environment and toward disarmament “remain steadfast in their nonviolent struggle.”

The anniversary gave Pax Christi the opportunity to reiterate its calls to end violence and violent conflicts to stop human rights violations; eliminate nuclear weapons as a human rights issue; demand safeguards for human rights in areas in the mining of vital metal and fuels; support civil society in their nonviolence work for human rights; support the 2030 time frame for the sustainable development goals as a key factor in advancing human rights.