Family’s first Christmas in U.S. makes a ‘heart open to Jesus and this new life’ 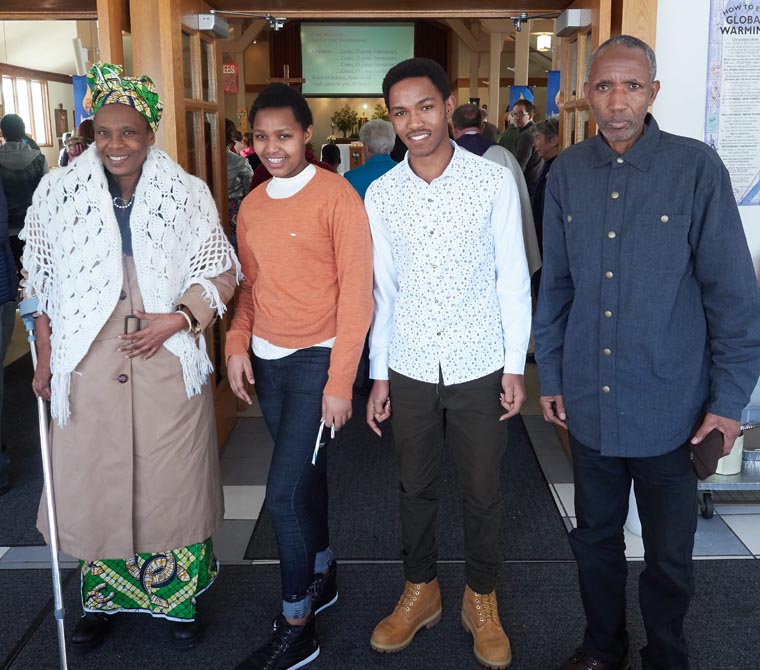 Justin Ndayambaje and Bienvenue Mbuguje spent Christmas 2016 in Rwanda’s Kiziba Refugee Camp. The brothers, their parents, and a cousin marked the birth of Jesus Christ last year with a treat — a rare meal with meat — and visited friends in the camp where the family had lived since fleeing war in neighboring Congo in June 1996. This year, they will celebrate Christmas giving thanks for their new life in Syracuse.

“We give thanks to God because he protects us and he gave us a way to come here,” their mother, Justine Njagari said, according to Bienvenue’s translation.

In their spotless rented house on the North Side of Syracuse, Justin and Bienvenue shared details about their family’s journey, correcting each other’s English and teasing their parents into talking about the past. Two blue couches and end tables filled a living room. A television, volume on low, provided the room’s only light, even as the late afternoon sky turned dark. Although the house was warm, most of the family wore several layers of clothing. A few pictures hung on the walls, but the house displayed no Christmas tree or creche.

Bienvenue was about 3 when the family left Congo, where they were farmers. Their father, Francoise Segahire, also taught primary students — a job he enjoyed for its potential to improve children’s lives in a country where few families sent their children to school. They left Congo because of “fighting,” Bienvenue said. “They kill people. They bomb houses.”

He remembers little of life before his family arrived at the refugee camp. Justin was born in a refugee camp, as was their 16-year-old cousin, Chantal Zaninka. The family lost track of Chantal’s mother; they think she is living in Rwanda.

Political unrest and war battered Congo (officially the Democratic Republic of Congo) from 1996 to 2003. About 2 million people were displaced and found asylum in refugee camps in neighboring Uganda and Rwanda.

Kiziba houses about 17,000 refugees, about 23 percent of the Congolese refugees in Rwanda, according to the United Nations, which runs the camp. The family’s home — one of almost 3,600 — was about 13 by 16 feet. Life there was hard, Bienvenue said, without elaborating. The family registered with the United States Citizenship and Immigration Services for resettlement in 2001.

The family felt a mixture of excitement and unease at news they would be resettled to Syracuse, 7,000 miles from the world they knew. Their comfort level increased when Francois’s sister, Eugeni Nyiramahoro, sent photos of the city. She and her son, Jacques Kayagwe, resettled in Syracuse about two and a half years ago.

Justine “was first afraid to enter the airplane, but beyond that, she felt she was going to a good life,” Bienvenue said. Francois saw the opportunity as “a good change in standard of living and security.”

They arrived at Hancock International Airport late September 26, a fall day with unseasonable temperatures reaching 88 degrees. They had one suitcase.

Since then, staff from Catholic Charities of Onondaga County and volunteers from All Saints Church in Syracuse have shepherded them to doctor’s appointments and English classes. They’ve taken them to the grocery store, explained Halloween traditions, and helped them deal with a ceiling leak.

“We’re doing our best to welcome them and show this is what we’re supposed to be doing as Catholics,” said Cherie Cogan, chair of All Saints’ refugee team. “We’re called to offer friendship and safety and welcome.”

The refugee ministry has opened Cogan’s eyes. She describes a trip to the grocery store, when Chantal exclaimed at the abundance of fresh tangerines. “I will never feel the same about a tangerine again,” Cogan said. “She was so delighted.” Getting to know the family reminds Cogan “how thankful I’m not.”

The parish was motivated, in part, to take on the new ministry by President Donald Trump’s January executive order calling for an end to refugee resettlement in the United States for at least four months, new “extreme vetting” for refugees from seven Muslim-majority nations, and an indefinite ban on Syrian refugees. Since then, a series of new executive orders and court challenges have created chaos for refugees and agencies that work with them.

Pope Francis frequently speaks about the Gospel message to welcome the stranger, a Catholic teaching especially relevant at Christmas, which recalls Mary and Joseph’s search for shelter in Bethlehem before Mary gave birth to Jesus.

“Every stranger who knocks at our door is an opportunity for an encounter with Jesus Christ, who identifies with the welcomed and rejected strangers of every age (Matthew 25:35-43),” the pope wrote in his 2018 World Day of Migrants and Refugees message, released last month. “The Lord entrusts to the Church’s motherly love every person forced to leave their homeland in search of a better future.”

Three months after arriving in Syracuse, Justin, 18, and Bienvenue, 24, are working at Berry Plastics in Solvay; Chantal attends Corcoran High School. Francois, 62, and Justine, 56, are slowly adjusting to Central New York life. The first major snowfall in December was a shock; they spent much of the day peeking out the window and wondering how people could walk through the snow.

Justine and Francois still speak little English and seem overwhelmed with the gifts their new life offers: a three-bedroom home, plenty of food, relatives nearby. They hope their sons and granddaughter will go to college.

Last Christmas, “We knew that many people are killed in Congo and life in the camp was not good, but we were still celebrating,” Bienvenue said. “We were still living.”

This Christmas, Bienvenue translates for his mother, “makes her heart open to Jesus and this new life.”