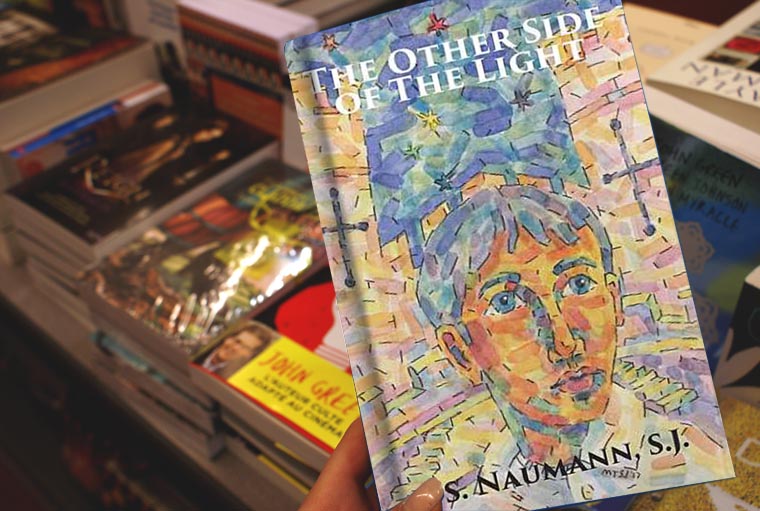 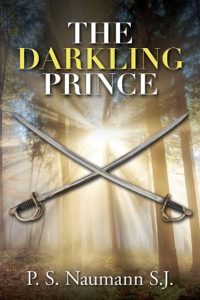 ‘Battles and jousts and madness and revenge’

With the prolific author gasping and the grandfather clock chiming, it was an entertaining afternoon at the Le Moyne College Jesuit Residence.

Father Paul Naumann, S.J., sat at a conference table recently and talked about his latest adventure book, The Other Side of the Light (TOSOTL), set in the year 1192. He figures the book is excellent summer reading “beachwise or porchwise” for “young adults through assisted living.”

“There’s a gasp on every page, well, not quite, actually, but every other page,” he said with a laugh. Then he demonstrated the typical reader’s reaction: a huge whistling intake of breath as if amazed by the mayhem on the pages.

Simulating incredulity is easy for the former director of high school Shakespeare plays and former Shakespeare professor at Le Moyne. TOSOTL is his 18th book in the approximately 20 years since he retired from the classroom.

The writer, whose pen name is P.S. Naumann, S.J., said he is not trying to set some kind of Jesuit record for adventure books. Copies automatically go to the Vatican and the Jesuits’ provincial headquarters in New York City, and fans of wholesome, exciting literature can buy them.

He said last year that his fictional works generally are written for “middle grade through assisted living. Because there’s something in there for everyone, everybody.” His output includes picture books; a tongue-in-cheek fantasy; the Crispin series, about a spunky boy born in 1931 (naturally, Crispin goes to a Jesuit school); and a medieval series, the first of which is TOSOTL, his longest book yet: 428 pages.

“Great characters,” he said of TOSOTL; “I’m patting myself on the back here, great characters, and exciting things happening. There are battles and jousts and madness and revenge and murder, all sorts of wonderful things to keep people … turning the pages.”

He could add an acronym: P.S. Naumann, S.J., PT (Page-Turner). How does he come up with all this stuff?

“I wish I could tell ya,” he said with his soft laugh. His speaking voice is as clear and hypnotic as the grandfather clock 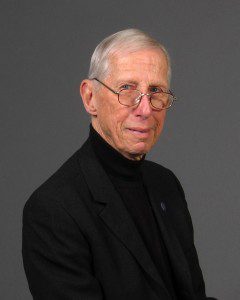 whose bumptious chimes tried to upstage him. He knows imagery, characterization, and staging; he directed many plays — including Shakespeare’s Hamlet, three times — when he was a teacher at Canisius High School in Buffalo. He even concocted sets for plays and arranged for fencing experts to advise the actors playing Hamlet and Laertes. During one summer, he directed Hamlet and Rosencrantz and Guildenstern Are Dead, by Tom Stoppard, on alternate nights! Feats like that gave him the versatility to bounce back and forth between themes and series in his writing career.

Father Naumann could actually be the Shakespeare of Syracuse. Why not? He’s prolific, he’s theater-minded, and he even trumps Shakespeare’s frilly collar with a priestly one. And P.S. Naumann is comfortable in any century because of his professorial experience and his endless reading. His tales allude to adventure stories he read as a kid, including The Black Arrow, by Robert Louis Stevenson, and King Arthur and His Knights of the Round Table, by Roger Lancelyn Green. P.S. Naumann’s advice for anyone who wants to be a writer: “Read, read, read, read.”

These days, Father Naumann spends a lot of his time carrying his books through self-publishing on CreateSpace.com. But when he writes, he does it all the time, transcending the dedication of writers who put in a few hours a day. It’s write, write, write, write.

“Even when I wasn’t writing I was still working on it in the back of my head,” he said. The back of his head is more productive than many an entire noggin. He also signs up for Jesuit Residence Masses at which he delivers his erudite homilies.

The truth about castles

The P.S. Naumann stories include some of the writer’s favorite elements of architecture, including castles, battlements, merlons, towers, spires, and lancet and mullioned windows. Young readers who make forts might want to study these things. 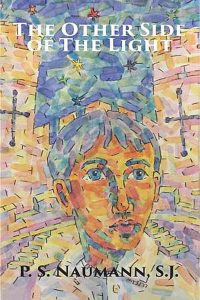 There are also forests and a secret lake or two. Again, Father Naumann draws from his experience: In the third year of his Jesuit novitiate, he served in Wales and visited the ruins of a castle. Castles, he said, are “very drafty and cold in the winter, and hot towards the end of the summer because the stones soak up the heat during the summer.”

Drafty or steamy, they seem right for his books.

“It’s me,” he said. “It’s what I’ve been interested in, and what I feel comfortable with.” Book No. 17, for example, Shadowboxes, is set in Cambridge, England, in 1995. Shadowboxes is a stand-alone book, not part of any series, unlike his latest, TOSOTL.

The author, with a short laugh, said he would “never tell” the interviewer what is on the other side of the light, but the back cover of the book summarizes the story this way:

Who will marry the beautiful young Countess of Rintoul?

Who will become the next Earl of Falconstryke? For different reasons, each of these questions agitates five of the great houses of the Atlantic Archipelago as the 12th Century presses towards its finish line.

Furthermore, young Oswyn of Agincroft, the protagonist, struggles to come of age honorably, and achieve his knighthood, while discovering that friendships dissolve, loyalties divide, and the ambitious struggle to grasp power by any means whatever.

The boy and the saber

Although Oswyn lives eight centuries before Crispin, they are both Agincrofts. The final Crispin book is No. 13 on Father Naumann’s list: The Darkling Prince. The author says writers must write about what they know, and so the book includes nuns in a papal cloister; a Requiem Mass; an abbey church; the Angelus; prayers for an escape and for a villain’s soul; a priest; an abbess; a blessing; and an “Amen.”

Religion, Father Naumann said, has been “part of my life ever since I was born, practically.”

He added, though, that morality does not preclude a sense of adventure; “quite the contrary.” So the reader of The Darkling Prince sees Crispin as an action boy who is willing to confront the unknown: “The door opened inward, where it was dark. … He threw himself through, his back against the wall on the opposite side. … He dashed up. A locked door. Was she on the other side?” An action boy must also have resolve: “With terrible determination he advanced, but slowly. Their sabers engaged, grated and clashed….”

Asked about the biggest thrill he gets from writing, Father Naumann said:

“This has actually happened to me. … I finished a chapter once, rereading it after some years, and I got right to my feet. I said, ‘Oh, I don’t believe I wrote this! This is a great chapter!’”

One could almost gasp.

How to buy the books

P.S. Naumann, S.J.’s books are available at these sites:

• CreateSpace.com. Click on the shopping cart up in the right-hand corner of your screen and follow directions.