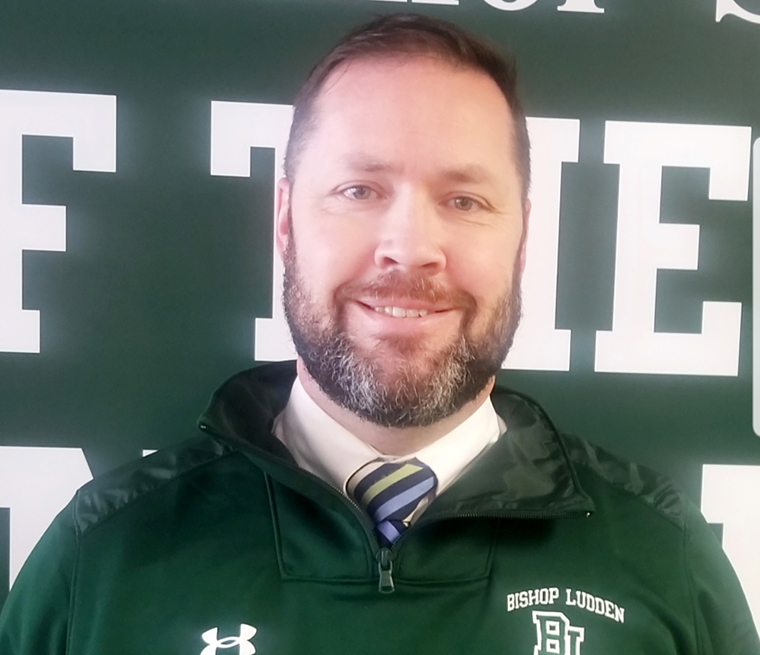 He honored the itch and snagged the job with those great hands.

“I was more of a crisp route runner, good hands and kind of a bigger frame for a receiver especially when we’re talkin’ 25 years ago,” said Jim Ryan, who was recently named the head football coach for Bishop Ludden High School.

He coached football for a long time, including a lot of college coaching, then got out of it for family reasons. He cited the intense commitment of “long seasons, long years,” so he switched to college administrator for a time.

But he explained, “Probably for the last two or three years I’ve had a really big itch to get back into football.”

He was 6-1 and 215 when he played for St. John Fisher College outside Rochester. He was no speed burner but he was pretty quick, and with his size he could block linebackers.

“There’s not another game like it,” the Camillus resident said. He added that “it’s probably the only sport where you practice more than you play. It’s a special game. So much about athletics teaches you about life in general,” such as camaraderie, hard work and dedication.

Ryan replaces Mike Rogers, who retired in November. For 28 years, Rogers taught American history and for 36 years he coached various sports at Ludden.

A native of Rochester, Ryan was a three-sport athlete at Victor High School. He was also a four-year varsity letterman and a two-year starter on the football team at Fisher. “The passing game hadn’t taken off like it is today where’s it’s fast-break football at most levels,” he said. “So I only scored a handful of touchdowns over my whole career, high school and college. … We had a guy that was carrying the ball 35, 40 times a game. … Everybody turned and handed off the ball, and then occasionally passed.”

He earned a B.A. in history from Fisher and a master of athletic administration degree from the College of Business at Ohio University.

In August 2021 he became the fulltime director of marketing and enrollment management at Ludden. Before that he served as the athletic director for Manlius Pebble Hill School; the wide-receivers coach at Hobart College and SUNY Morrisville; an assistant varsity football coach at Bishop Grimes and Cato-Meridian; and the head JV coach at Grimes.

Coaching Ludden football is not just his commitment, he said, it is a family commitment. His wife, Elizabeth, works at Syracuse University, and they have four children who keep him busy in a jolly way. “Everyone was excited about the opportunity,” he said, “so I threw my hat in the ring.”

Ryan laughed that he was thinner and younger when he played for Fisher, but he projected youthful triumph over the phone, as if he were a Ludden student and not a mentor there. He considers himself a teacher first when it comes to football. “I can get my message across without demeaning, demoralizing, yelling at somebody,” he said.

And “school comes first,” he said, “because if you’re not doing well in school, you can’t play on the field.” Time management is important—and no shortcuts. He wants his players working in the weight room, finishing their homework in school rather than waiting, taking their tests and attending all classes. A strong academics-focused team, he said, will translate pretty well onto the field.

Ex-Coach Rogers told the Sun in January that one recent Ludden team was top 5 in the state and lost the championship to Dolgeville, then moved up to Class B. “We didn’t whine about it, we just went out and played,” he said. Now Ludden plays in Class C, which Rogers said could be the toughest division in Section III. The last Ludden team he coached ended up 19th in the state and reached the sectional semis.

“It takes all 11 on the field to get it done,” he said, as opposed to other sports in which one person can “kind of take over a game. That typically doesn’t happen that much in the sport of football but it’s a special game and it takes a team to get it done and I think those … things are attractive in why I love the game.”

He said there is something about Friday night lights or a Saturday game—”only one chance per week.”

“Bishop Ludden is pleased and excited to announce the hiring of Jim Ryan to be our next varsity football coach,” Ludden Director of Athletics Gallagher Driscoltl says in an email. “Jim will replace Mike Rogers who retired in November.”

Coach Ryan has coached and played football at both the high school and collegiate levels. For six years he was the athletics director at Manlius Pebble Hill School.

2008-2014: Hobart College wide-receivers coach: Overall record 49-13; the Hobart coaching staff was recognized as Liberty League “Staff of the Year” 2008, 2012, 2013. During this span Hobart qualified for the NCAA Division III Sweet 16 and the national quarterfinal once.