Gabby and John are getting married … and Jesus will be there! 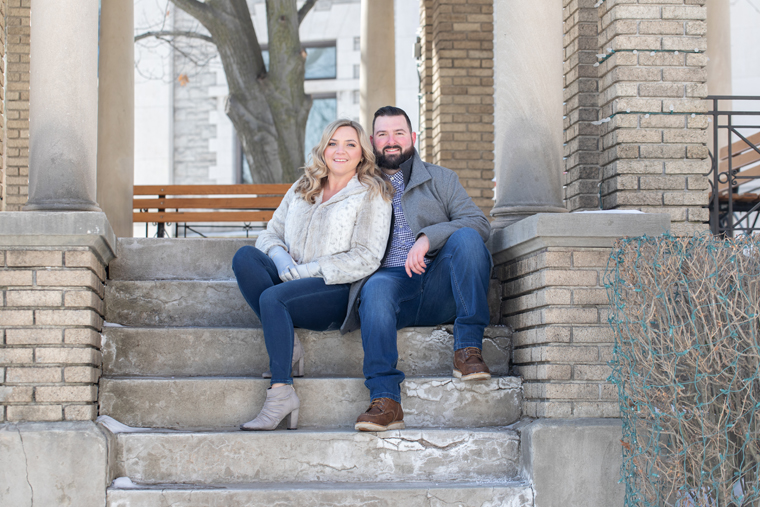 Think back to the last wedding you attended that was held in a church or, at the very least, was witnessed by an actual member of the ordained clergy. It might be a stretch as the numbers have been in decline. COVID has been a recent cause, but it goes back long before that. The Center for Applied Research in the Apostolate (CARA) at Georgetown University is one agency that tracks such statistics, and they point out that in 1970, there were more than 420,000 Catholic marriages witnessed as compared to 154,000 in 2014. Researchers blame the increase in cohabitation—living together, in plain terms—and a cultural shift away from organized religion as parts of the problem.

So, we would like to introduce you to Gabby and John, part of the solution.

Gabrielle—or Gabby—Gleason and John Pattwell are a couple from the Binghamton area who are planning a traditional church wedding in 2023 and couldn’t be more thrilled about it. They are thrilled about the wedding, of course, but equally excited about the church and faith connection, too. But before we cover that, a little background information is required.

“I went to Vestal and John went to (Chenango) Forks” high schools, as explained by Gabby. They knew of each other and the people they hung out with, but they never really met until a birthday party neither wanted to attend.

“I moved back from working in Florida in April 2019,” John explains. “I went to my brother’s house. … There was a birthday party for one of my friends downtown. I’m not a big downtown guy,” but John went along with his siblings to the party. “I’d never met Gabby before, but she was there.”

Gabby was out for a night of fun with her mom and uncle and, after getting home, decided to go along to her friend’s birthday party where she and John “just kind of ran into each other. … ’Hi, I’m John,’ he said” and they ended up chatting for a couple of hours. A first date at a local Mexican restaurant happened two days later, and they’ve been a couple ever since.

While engagement happened recently in their relationship, there has never been any doubt in their minds that faith has and will play a very important role in their lives. John was raised Irish Catholic, in a family that, while not always consistent in Mass attendance, always followed God’s word and focused on doing the right thing.

“Being a good person … being a person of your word” are a couple of the lessons John’s family shared, “from the Bible, through Jesus Christ. … That’s how he wants us to live our lives.” Gabby has had a more parish-based faith experience growing up and she has helped John to come back to a more consistent Mass-attendance routine. When asked if Gabby has had an additional impact on his faith life, John says, “Yes … working for the diocese,” and Gabby quickly interjects with emphasis, “That will do it!”

Gabby is the Communications/Social Media Specialist for the Diocese of Syracuse. Her unique recipe of deep personal faith—working for the Church as a media evangelist, spreading the Gospel each day and planning a marriage in the tradition and practices of the Catholic faith—is what led us to invite John and her to share their experience with our readers. From now through their wedding next January, the Catholic Sun, Catholic TV and (obviously) diocesan social media will follow Gabby and John on the path to the Sacrament of Marriage. You’re invited to come along!

“We’re cruisin’,” Gabby responds when asked how details are coming together. Many boxes have been checked as they prepare and they have tried to incorporate relatives, especially grandparents, and close friends into the process. Gabby especially has had some prior practice, or at least exposure.

“Gabby has been in a ton of weddings, maid of honor three times. … I’ve only been in one wedding,” John explains. Most of them have not been weddings based in church or faith. Gabby adds that “I’ve been a bridesmaid a handful of times. To each their own, though a lot of the weddings we’ve been to together are not focused around the religious sacrament of marriage or really acknowledge that it’s a union between man and wife with God as their witness. We wanted to incorporate our faith as much as possible throughout our wedding day.”

So, as they plan a wedding that will follow the traditional liturgical and sacramental practices of the Church, what advice might they have for others at this juncture?

“Having self-responsibility,” says Gabby. She has friends who find themselves in unhappy situations because they didn’t follow a faith path with their plans. She adds, “John and I want God to come first and then the rest of our plans kind of fall into line. Living together, home buying and other life items came before the prospect of deciding to get married and for some, it can add a lot of unnecessary pressure when you haven’t made the decision to get married together yet, we believe.”

“In our generation especially, it’s buying the house first, then getting a dog and then (they) are going to try to go to church together and maybe get married in five years. … Maybe it’s old school, but I think there is a reason why some people do things responsibly and slowly. Even if you don’t see any fruit in the beginning, I think dating and getting to know each other first is the best advice.”