Hand in hand, they journey toward their special Mass 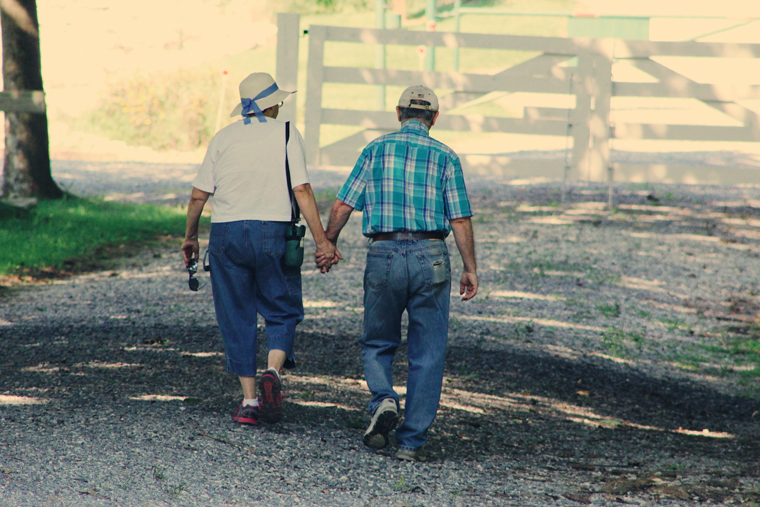 Couples to mark World Marriage Day at Mass with bishop

The stone deer in their yard symbolizes the permanence of the couple’s marriage.

Jane and Ted Plis, of Syracuse, will mark their 69th wedding anniversary on April 25. Unlike the stone deer, they have traveled to all 50 states, China, many European and Scandinavian countries, and the Mediterranean and Caribbean.

Their motto is “Be kind, be patient, be loving and forgiving, think positive, have a sense of humor and thank God for his blessings each day.”

Parishioners of the Basilica of the Sacred Heart of Jesus in Syracuse, Jane and Ted are the longest-married couple who, as of last week, had signed up for the special World Marriage Day Mass offered by Bishop Douglas J. Lucia at 2 p.m. on Feb. 13 at the Cathedral of the Immaculate Conception in Syracuse.

For more than 30 years, the special Mass has been open to all married couples, but special recognition is given to couples celebrating 25, 50 or more years of marriage, said Lisa Hall, Director of the diocesan Office of Family/Respect Life Ministry.

“These special couples,” she said in an email, “are called up by name and given a certificate by Bishop Lucia. It is such a sweet and beautiful Mass!

“We honor couples this way because marriage is so important to the life of the family. St. John Paul II called marriage the ‘primordial sacrament.’ It shows us, in our very bodies and nature as men and women, that God calls us to be life-giving, nurturing and loving.

“Our Mass on World Marriage Day seeks to joyfully celebrate those who have embraced and who continue to live, day in and day out, their call from God to live freely, truthfully, faithfully and fruitfully forever with their spouse. Sacramental marriage points us to the gift of living in union with God forever—what a blessing!”

“We invite all married couples to join us at the Cathedral of the Immaculate Conception on Feb. 13th to renew their commitment to Holy Matrimony.” 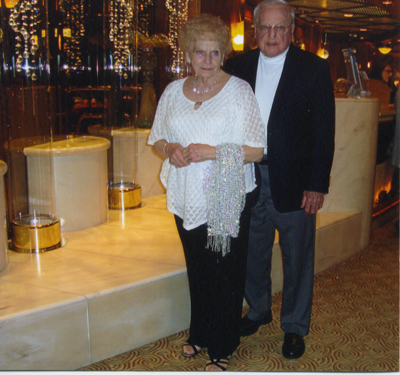 Jane and Ted Plis are University of Notre Dame sports fans because their son, daughter-in-law and granddaughter all graduated from there; they have attended many Notre Dame games. (Photo courtesy the Plises)

Ted, 92, and Jane, 87, have been to World Marriage Day Masses before. Four years ago, Jane said, “I thought they did a very, very nice job with the whole thing; they brought up all the people that were celebrating their special years. … It was very inspiring, [Bishop Robert J. Cunningham’s] sermon was very nice, it was very touching, it was emotional.”

Bishop Lucia, she said, has been to their parish several times and “he’s a very nice bishop, he’s a people bishop. … He’s very friendly, I like him very much.”

Jane said she tries to be a people person herself. “You have to have a positive attitude,” she said.

“Oh, she’s everything that I had looked for,” Ted said, “and I had no surprises. We hang in for each other and every day is a bonus.”

“The daily Mass helps,” he added, “it keeps you on your toes, reminds you of there’s other things to come besides the marriage.”

Ted was the quarterback for the Auburn High School football team that went undefeated in 1948. “Triple threat,” he remembered. “I threw it and punted and ran whenever I needed. … In fact I’d call a couple of my own plays. I switched the halfbacks around. At that time we played a T formation out of a double wing, and we had some good guys.” He was injured only once, when he did a shoestring tackle and the heel of the other player broke his cheekbone. “Those days we had leather helmets, not these astronaut plastic jobs,” he said.

The couple met in Syracuse; “his mother introduced us,” Jane said.

Ted enlisted in the Air Force on Dec. 7, 1948, and his service included a couple of years of foreign service. He held many managerial positions at General Electric on government contracts in the Heavy Military Department. He retired after 38 years of service. A 4th Degree member in the Knights of Columbus, Ted is actively an usher at the Basilica and has been for many years.

Jane worked at Carrier Corp. and Lipe-Rollway’s Human Resources Department as a secretary/specialist for many years. She is a member of the Rosary Society and the baking committee for Basilica functions.

Two couples are celebrating their 67th anniversary this year. 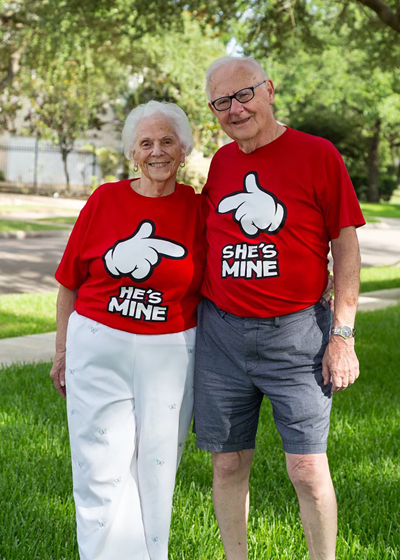 “I just like helping people,” says Margaret Soukup, and her husband, Joe, is the same way. Their public service has included bringing Holy Communion to a nursing home and delivering meals for Meals on Wheels. (Photo courtesy the Soukups)

Margaret and Joe Soukup (Soo-kup) were married on June 11, 1955, at the Cathedral. They are parishioners at Divine Mercy Parish in Central Square and live on Oneida Lake in Brewerton. “Right now, it’s covered with ice and snow,” Joe said. “But it’s still pretty.”

Their house was built in 1957 by Joe’s father and grandfather, and Joe helped along with other relatives; Margaret and Joe moved there in 1987. They have dinner in the sunroom pretty much every night in the nice weather. Could the water have a healthful effect?

The Soukups really wanted to attend the World Marriage Day Mass, but that is unlikely because Margaret suffered six broken ribs last week in an accident in their home. She was in the hospital five days and came home Tuesday.

Joe went to the former Cathedral School in downtown Syracuse where the Catholic Sun and some of the other diocesan offices are now; he saw the War Memorial being constructed (“pretty noisy”). Cathedral School had grades 1-6 on the first floor; 7-12 on the second. The library and lunchroom were in the basement. The third-floor gym/auditorium, in his experience, was never used as a gym, Joe said. Sisters of Charity nuns taught school, he recalled, and “they didn’t have any school show. … They didn’t have very much in the way of chorus or anything like that, it was strictly academic.”

Margaret went to the former Blodgett Vocational High School on the west end. They both had jobs after school in the kitchen of what was then Syracuse Memorial Hospital, and that’s where they met. There was time during the day when they weren’t working, so they would just stay there and go up in the clock tower and play cards, Scrabble or Monopoly.

Margaret converted to Catholicism just before they were married, and she made her confirmation at the Cathedral. She worked at Penfield Manufacturing Co. as a secretary until their first child was born, serving as a mother and housewife, and then she worked close to 20 years at Upstate Hospital.

Joe went to college for a while and got drafted in 1953 and spent two years in the Army. He then worked at GE for a little over 20 years and then for JB Brady Co., working with everything from tiny lab scales to truck scales; both Margaret and Joe have been retired for quite a while.

Margaret has sung in church choirs, and they both were Eucharistic ministers at a nursing home. They helped Meals on Wheels in the Brewerton area for over 20 years. “That was very satisfying,” Joe said, “because a lot of these people didn’t see anybody else. You delivered that meal to ’em and you had that little conversation and they looked forward to you coming.” For many years they also worked the polls for elections.

They like to work around the house and travel. They have two girls and three boys; one child was stillborn. The children live in Onondaga County; Virginia; Texas; and California.

“That’s where love comes in, you get over it,” Margaret said.

Asked if the marriage has turned out the way he thought it would, Joe said: “The years go by and all of a sudden it’s 67 years! I don’t think you think about that far ahead of time. … The moment stretches out.”

“You think about getting through every day,” Margaret said with a laugh.

She added: “I just play it day by day. There’s going to be bumps in the road no matter where you are.”

“We’ve been accused of being joined at the hip though,” Joe said. “We’re always together.”

It began in the Bronx 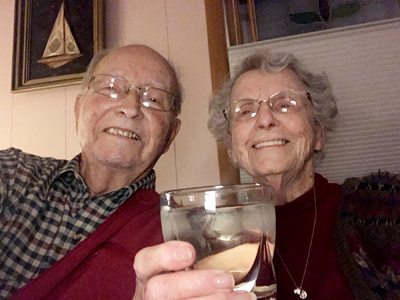 Bob and Joan Paccone wanted to live in a “decent upstanding community,” so they settled in Apalachin in Tioga County. Has the marriage turned out the way they thought it would? “I guess so because [we’ve] been very happy, we’ve had fun, we’ve done things,” Joan says. (Photo courtesy the Paccones)

Joan and Bob Paccone (Pah-cone-ee), residents of Apalachin and parishioners at St. Ambrose in Endicott, were married Dec. 26, 1955.

Bob, 90, has been a retired electrical engineer for 35 years—“I’m retired longer than I worked.”

How could he do that?

“Work hard. Keep your nose to the grind and get the job done.”

He considers Joan, who turns 90 next month, the model for the family—“her dedication and the way she raised the children, and we’ve seen that now how well they’ve carried on and live their life. They’re all married and they’re all happy, they’re contented and they’re all doing things in their own way in their churches in their community, so that’s the kind of reward that we never thought we’d get but we did.”

Their favorite song is “I Just Called to Say I Love You.”

“Every day when my wife was on chemo and radiation because she had breast cancer [mastectomy 40 years ago], I’d call her and sing that song to her. And … she’s still goin’ strong,” Bob said.

He was singing for his parish choir when he was 6 years old and he took 12 years of piano lessons. “The choir director showed me how to turn the organ on and off, and said, ‘Here, you play for novenas and Stations of the Cross, give me a break. So I was 13, 14 years old and I was doing that down in the Bronx,” where he attended All Hallows High School, three blocks from Yankee Stadium.

“In ’57 we found this little community in Apalachin, we had a house built, we’ve lived in the same house for 65 years now,” Bob said. Their six children live in Texas; North Carolina; Virginia; Onondaga County; Massachusetts; and Apalachin. Joan and Bob also have grandchildren and great-grandchildren.

Bob had gained more organ experience when he played for different services during his two years of Army Signal Corps service in Fairbanks, Alaska. In Apalachin, he sang with and directed the choir and he also played the organ at funeral and wedding Masses for 17 years at St. Margaret Mary Church. Joan helped out by teaching Confraternity of Christian Doctrine. The couple switched to St. Ambrose in about 1980.

Bob believes “the wife is always right, makes for a happy life. And live your faith and try to pass it on to your children, and … you don’t have to keep up with the Joneses. Just be satisfied with what you have is basically the approach we’ve taken.”

Patience is another secret, Joan said.

As for Bob’s motto that the wife is always right, she said with a laugh, “That’s right, I agree with that one.”