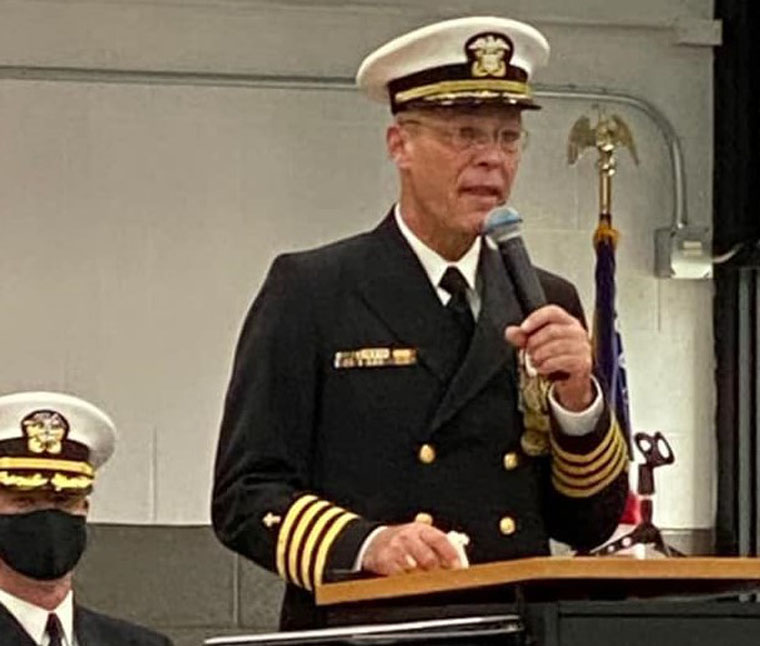 After 29 years of service, Rome pastor retires  from Navy Reserve

Back in his high school days he was, in a sense, the guy who piped them in. Now, the Navy Reserve has piped him ashore.

Father Sean P. O’Brien, who showed early leadership as the morning announcer at Vestal High School, was presented with a folded United States flag at his Navy Reserve retirement ceremony Oct. 4. He turned around and presented the flag to Bishop Emeritus Robert J. Cunningham “in appreciation for the support over the years from all the people in the diocese and the parishes that I served,” he said.

He has served the Diocese of Syracuse in Utica, Forestport, Pulaski/Lacona, Boonville, East Syracuse, Minoa, Bridgeport, and, since 2019, Rome.

As the retirement ceremony started at the Navy Operational Support Center in Syracuse, Father O’Brien was introduced as Captain O’Brien. “And then the whistle blows, they pipe me in,” he said.

The three-time winner of the Navy Achievement Medal was praised and roasted at the ceremony, which usually takes about an hour but lasted 35 minutes due to coronavirus-pandemic precautions. “It was a good time,” he said.

Asked about the roasting, he said: “I’ve crashed a few weddings.”

When the ceremony was over they dropped the “Captain” reference: “They said, ‘Father O’Brien, departing.’ And they blew the whistle and off I went.”

Then, back at St. Mary–St. Peter Church in Rome, where he is the pastor, the Altar and Rosary Society “put on a wonderful little reception.”

The 55-year-old pastor had served aboard aircraft carriers, cruisers, destroyers, and submarines and in places such as Bahrain, Kuwait, Afghanistan, the United Arab Emirates, Africa, and Norway. “They always seemed to send me there in February; man, was it cold,” he said of Norway.

Submarine life? “I loved it,” he said.

“As a chaplain,” he said, “I was never out too long. I’d be on one sub, then I’d go visit another sub. … But submarines, they go out for six or eight months; I didn’t do that.”

His favorite Reserve setting was “out to sea. … I love sea life.”

Is it the salt air, waves, wind?

“It’s everything,” he said. “It’s the excitement of the ship and also the loneliness of the sea, all combined. … ’Cause when you’re out there on the side rail looking into the ocean at nine o’clock at night, there you are alone. … I never slept better than when I slept at sea.”

He could have served another seven years in the Reserve, which he had joined in 1991, two years before he was ordained. But he said parish and diocesan responsibilities are very different now. “I didn’t think that I was able to balance the two the way I used to,” he said, “so I thought it was time to retire — I’m a priest first.”

Father O’Brien was born in Binghamton (baptized at St. Patrick Church) but grew up in Vestal, where Our Lady of Sorrows was his parish from First Communion up.

From the ninth through 12th grades, he said, he was the “voice of Vestal. … Every day, you heard Sean O’Brien say, ‘Good morning. Today is Friday, Nov. 6th, Day 1. Please stand for the Pledge of Allegiance.’ And I would lead the whole school in the Pledge of Allegiance, and then I would read the morning announcements before classes began.” 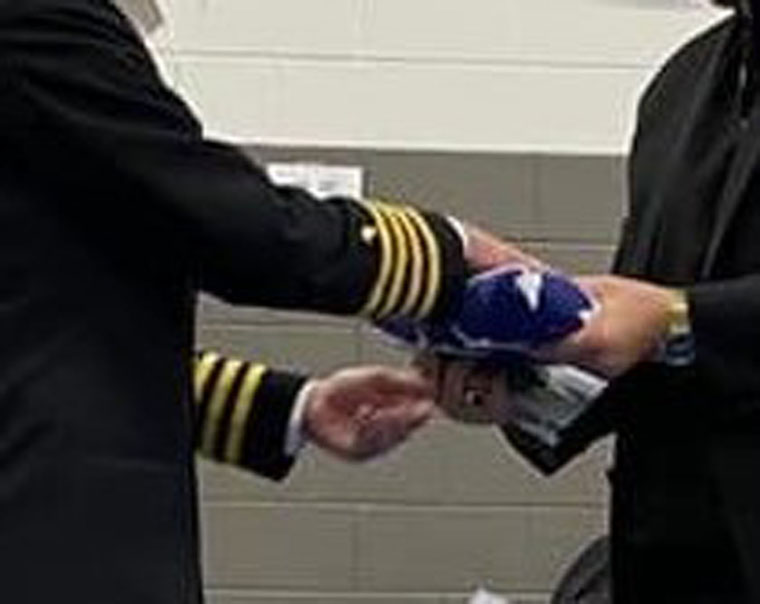 Regarding leadership skills, Father O’Brien said, “I suppose to some degree a person is born with them. But to some degree I think your parents, your family has a big role in developing your natural skills or instilling skills, teaching you skills.”

“My mom [Donna, nee Tompkins] and dad [John Francis] were both hardworking people,” he said. “My mom was a barber, and my dad was a glazier,” building window frames and cutting and installing glass.

He said their parents were always very trusting of his sister, Maureen O’Brien, and him. “My sister is also a very strong person and is in a pretty high position at the law firm where she works” in Chicago, he said.

After high school Father O’Brien studied at Herkimer College to be a radio announcer. But he decided to apply for the seminary and was accepted by the Diocese of Syracuse. After three years at Wadhams Hall in Ogdensburg, he finished major-seminary studies at St. Mary’s in Baltimore, and he was ordained on June 5, 1993.

Asked if it was difficult being promoted to captain, he said:

“You have to work hard and stay in shape, keep your nose clean. It’s not guaranteed. When the Navy promotes somebody to captain the Navy is making an investment in that person’s leadership skills — commander and captain. So for me it was an honor that the Navy saw those leadership skills in me and made that investment. And I honestly think they got a return on their investment.”

That return on investment, he said, was “the good work that I did, the resilience that I helped sailors build, the comfort, the counseling, morale building — the things that chaplains do.”

With a shortage of chaplains, he worked with the Navy, the Army, the Air Force, and the Marines. If they hadn’t had Mass in a long time or hadn’t seen a priest in a long time, he would visit wherever the military people were stationed.

His last assignment was with the Merchant Marines. Instead of signing up for three more years, he retired.

“I’m in touch with friends I’ve met throughout the years,” he said, “but I’m probably still the closest to the ones I’ve met in the submarine force. … It’s a very small community. There’s a very strong bond when you serve in such austere conditions.”

Favorite place in the world

There is no Navy yard in Rome. Father O’Brien said lightheartedly: “Rome is definitely an Air Force town, so I’m a fish out of water.” But he loves it: “Oh, Rome’s a great town.”

And his “favorite place in the world is behind the altar.”

He said one of the hallmarks of his St. Mary–St. Peter Parish is the history. When it began in 1836, he said, its four priests had to cover eight counties, seven of which are now in the Diocese of Syracuse. He noted the parish has existed through two world wars, the Vietnam war, the Spanish American flu, the Civil War, and the Depression. “When you read the history,” he said, “it was really a beacon for all the people, not just the Catholics who came to Mass here.” 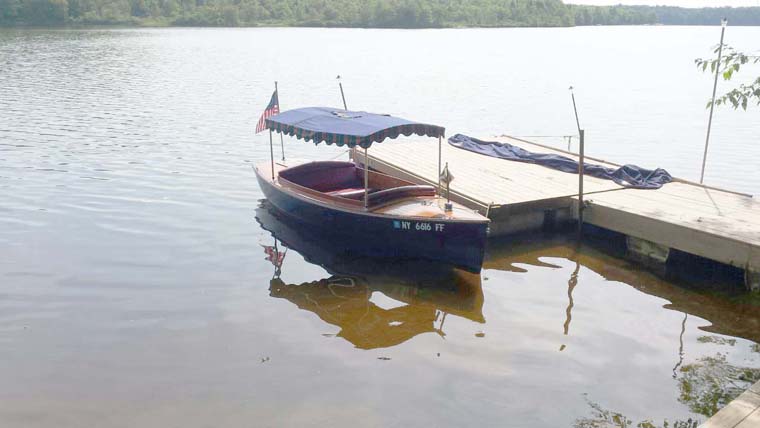 There have been only seven pastors in 184 years at St. Peter’s, he said, and one pastor was there for 44 years: “And that says something else too, doesn’t it — that the pastors come and stay.”

Another hallmark of the parish: the people — “just fantastic here in Rome.”

“That was a real surprise,” he said.

After the final whistle by Boatswain’s Mate, Senior Chief Christopher Flores at the retirement ceremony, “the ship sets sail without you,” Father O’Brien noted. But the true sailor finds a way.

At the approximately three-mile-long Kayuta Lake in Oneida County, he keeps a “100 percent environment friendly” 16-foot boat with an electric motor that runs on two 12-volt marine batteries. “It’s a mahogany launch with a canopy that you can either put up or leave down,” he said.

The top speed of about 5 mph is appreciated by his 14-year-old Weimaraner, Abigail. “You just sit and cruise the lake real slow,” he said, “and enjoy the day and wave to other boats going by. …

“So when I get up early in the morning and go out on the lake with a pitcher of coffee and my prayer book, and I go out to say my prayers, you can’t even he