Icon of Mary revered at Holy Trinity in Utica

Appearing out of legend, revered as a dowry gift, and protected by an ancient order of priests and brothers, the Black Madonna of Częstochowa is an icon that resides at a majestic monastery in central Poland.

Three popes — St. John Paul II, Benedict XVI, and Francis — have all visited the site and presented a golden rose as a tribute to Our Lady. Many miracles have been attributed to Mary in Częstochowa, said Father John E. Mikalajunas, pastor of Holy Trinity Church in Utica. 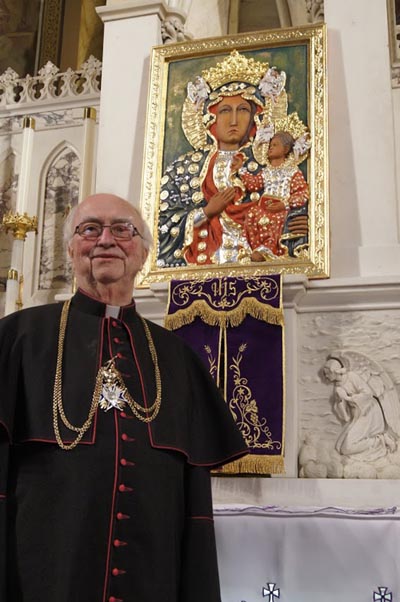 Each evening, he said, a silver shield goes over the icon, which depicts Mary holding the Baby Jesus. Each morning, the shield comes off. Many miracles have been attributed to the four-foot-high painting.

Father Mikalajunas is naturally drawn to the Black Madonna. In 1947, when he was 4, a neighbor spread rat poison to protect his chickens. The poison made its way into the child’s sandbox, and he ingested it in a cracker. The future priest’s mom prayed the rosary intensely and the poison came out of him at midnight, he said.

And so he commissioned a copy — in the form of a woodcarving — of the Black Madonna for Holy Trinity. The copy has been displayed for a month, and everyone is invited to pray to the Black Madonna. “This is my personal object of devotion,” Father Mikalajunas said. Holy Trinity has been publishing a prayer in honor of Our Lady of Częstochowa in its bulletin.

Poland has always been a matriarchal society, he said, noting that the country has over 1,000 miraculous paintings of crowned images of the Blessed Virgin Mary. The images were crowned by bishops and priests. In September 1717, almost 300 years ago, Pope Clement XI crowned the Black Madonna, sending an emissary to perform the ceremony. It is the first crowned image of Mary outside the city of Rome by a pope, Father Mikalajunas said. This year, he said, the Polish parliament proclaimed Mary as the Queen of Poland in honor of the 300th anniversary of the coronation of the Black Madonna.

But the icon’s origin goes back even farther. Father Mikalajunas cited this legend:

The original painting was produced by St. Luke the Evangelist in Nazareth on the kitchen table of Jesus, Mary, and Joseph. The table itself was made by Joseph and Jesus.

From Nazareth the painting made its way to Europe, where it was passed along as a dowry gift for marriage. It came from Ukraine to Poland in 1382. The Pauline Fathers from Hungary came to be caretakers of the icon in that year, and they still perform that function in their monastery in Częstochowa.

Father Mikalajunas has been there 11 times, and he has been the main celebrant at the altar at least twice. During one visit, he witnessed at least 300 little children receiving their First Communion at the opening of the icon. “Absolutely breathtaking!” he said.

His copy of the icon was created out of one piece of wood by a couple living in the mountainous area of southern Poland. Peter Michalek carved the icon and his wife, Theresa, painted it and gilded it.

Father Mikalajunas described the painting: Mary is pointing toward the Baby Jesus, who holds the book of the gospels. Mary’s role is not to attract attention to herself. Jesus looks into her heart that gave him life, in order to bestow his divine blessing.

Father Mikalajunas has promised to display the Black Madonna icon for at least 52 Sundays, although he would be pleased if it stayed there for years. “Mary is great,” he said, “because she points us to Christ. … She’s the one who gave us God in human form. She leads us to him that we might know him.”

The public is invited to view the original icon with Father Mikalajunas in September. The trip, set for Sept. 17-28, is a 100th-anniversary pilgrimage to Fatima, Portugal, but it includes a visit to Poland. For registration, call Father Mikalajunas at 315-724-7238, or email jmikalajunas@roadrunner.com.